Thin-film batteries offer engineers a unique component for use in designing power into circuit designs.


Thin-film batteries offer engineers a unique component for use in designing power into circuit designs. Offering many of the advantages of supercapacitors and conventional batteries, thin-film devices are semiconductor devices that simplify integration in circuits while offering high energy density, discharge rate, and life cycle. Engineers can enhance designs with rechargeable thin-film storage devices available from suppliers such as Cymbet and Infinite Power Solutions.

These devices combine the kind of high current found in supercaps with the energy density and low leakage current of batteries. Compared to conventional rechargeable batteries, thin-film batteries allow significantly more discharge/charge cycles — an order of magnitude more at 100 percent depth of discharge, and two orders of magnitude for 10 percent depth of discharge. Thin-film batteries are physically smaller than supercaps or standard batteries and offer near-zero leakage. Furthermore, these solid-state devices can be treated as permanent additions to circuits, providing rechargeable power for the effective lifetime of the circuits they supply.

Formed by vapor deposition on a substrate (Figure 1A), the full height of the completed layers can be thin indeed, at 10-15 µm. A thin-film storage device generates power as Li ions diffuse from the anode to the cathode film, moving through a solid electrolyte layer typically manufactured from lithium phosphorus oxynitride (LiPON, Figure 1B). This process is reversible so the battery can be recharged and Li ions restored to the anode by reversing the current.

Figure 1: (A) A micrograph of the cross section of a thin-film battery fabricated by vapor deposition on a substrate; (B) A schematic of the cross section, where arrows illustrate the path of Li-ion diffusion from anode to cathode through a solid electrolyte. (Courtesy of The Electrochemical Society.) 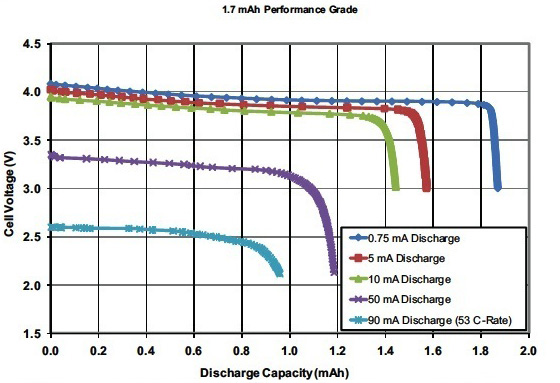 Figure 3: Thin-film batteries demonstrate the typical characteristics of Li-ion batteries, providing a near constant voltage output across a wide middle range of its discharge capacity. (Courtesy of Infinite Power Solutions.)

Unlike traditional Li-ion batteries, thin-film batteries can be charged at significantly higher rates. For example, the Infinite Power Solutions THINERGY MEC201-10P can be charged to 50 percent capacity at a 40 C rate, compared to recommended charge rates for conventional Li-ion batteries that are specified at about 2 C or less. Since 1 C is the charge or discharge rate relative to the full capacity of a battery in one hour, a 40 C rate for charging a MEC201-10P, rated at 1.0 mAh, corresponds to a 40 mA charge current.

Engineers nevertheless need to account for the temperature dependence of these devices. Cell impedance rises (or falls) by a factor of two for every 10°C increase (or decrease) in ambient temperature. In turn, maximum discharge current and charging rate can change significantly with temperature.

Engineers can find available thin-film batteries in a broad range of capacities. The Infinite Power Solutions 0.17-mm-thick THINERGY series includes devices with capacities ranging from 0.13 mAh to 2.2 mAh (25°C), while supporting 100,000 recharge cycles with a typical charge loss per year of 2 percent.

Thin-film storage devices are well suited for use in point-of-load designs where the power source is brought as close physically to the load as possible. This technique not only minimizes I2R losses, but also further isolates circuitry. Thin-film storage devices allow designers to implement this approach, because these devices can be treated like any other IC in building modules, printed-circuit boards, and subsystems.

Cymbet offers its EnerChip device as a bare die, permitting even more compact packaging for point-of-load designs (Figure 4). Using the EnerChip bare die, engineers solder-attach the device to a circuit board using flip-chip techniques. Along with bare-die versions of the 12 µAh CBC012 and 50 µAh CBC050, EnerChip also offers bare die at 1 and 5 µAh capacities.

Figure 4: Thin-film batteries are semiconductor devices that can be packaged with other devices (A) and take advantage of flip-chip techniques (B) for board attachment. (Courtesy of Cymbet.) 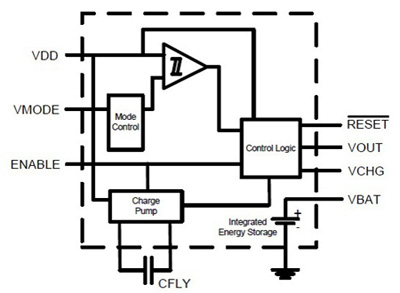 Here, the device uses its internal charge pump to charge itself during normal operation. When the chip's supply drops below threshold voltage specified by the engineer user, the device routes the output of the internal thin-film storage to the output.

Thin-film batteries offer unique opportunities for integrating power sources directly into circuit designs. With discharge cycles in the thousands and life cycles ranging well over a decade, these devices effectively provide a lifetime rechargeable source for designs. Engineers can draw on a wide range of available thin-film batteries with diverse capacity and capabilities to easily incorporate these sophisticated semiconductors in their design work.