This article looks at the use of free space optical systems to provide point-to-point networking links in various scenarios.

Interest in free space optics (FSO) communication has been growing for several years, but has had some ups and downs over that time. Using a laser to transmit information in a point-to-point link is an attractive concept, as there is no costly installation of fiber cables, the systems can be installed quickly, and there is no need for expensive licenses or regulation.

This has meant it has been attractive to applications that need last deployment, such as disaster recovery and temporary network provision. It has long been a candidate for the ‘Last-Mile’ of the network to connect a telecom gateway to end-user premises. It is also attractive as the backhaul connection for small cells that are installed in hard-to-reach places to boost the coverage of mobile phone networks.

The most popular application has been to install the laser and receivers on the top of tall buildings to provide a data link over several miles with bitrates in the gigabit per second range, avoiding costly fiber links.

Over the next five years the market is expected to expand at a modest rate overall, although growth will be more rapid in the Asia-Pacific region (19%) than elsewhere. In contrast the EMEA region, currently the largest of the three with a market estimated at $11.4 m last year, will grow at 4.6% and be the smallest of the three by 2018. 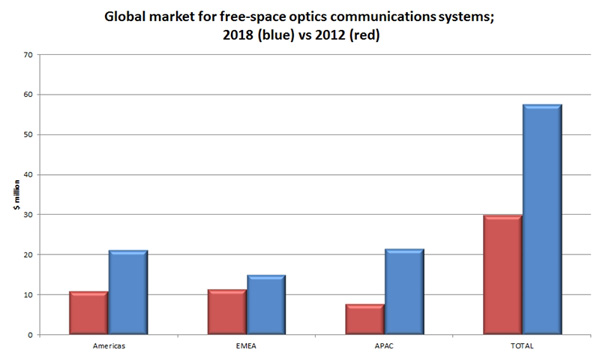 Meanwhile, deployments in the Americas are forecast to grow at a compound rate of around 12% to reach $21.2 m by 2018, driven by continued upgrades and more networks in the US and Canada, but also from the accelerating economic growth of major cities in Latin America. While the APAC region already has advanced communication technology in Japan and elsewhere, there is scope for FSO deployment in some countries such as Australia, China, and India.

However, the technology has in the past been prone to disruption by bad weather, meaning that a stringent back-up communications technology, typically radio frequency, is needed for redundancy, something that ElectroniCast flags as a huge roadblock to carrier acceptance.

There are even plans for a satellite-based FSO system. LaserLight Communications plans to launch a constellation of 12 satellites using FSO by 2017, as long as it can raise $2 billion for the launch.

The forecast does not include military uses. Last September, the US Navy awarded a $7 million contract to develop an FSO system suitable for use at sea, where connecting two ships moving in two dimensions with a point-to-point link is a significant technical challenge.

However, the technology has other significant drawbacks that have limited its use in many applications as FSO transmission is hindered by atmospheric turbulence, fog, building movement, and interference of sunlight.

Enough transmitter power has to be seen by the optical receiver, and this, coupled with the absorption of the light by the moisture in the air, severely limits the range. As the range increases, the laser must be pointed more accurately so that the beam hits the receiver and the free-space path has a small loss. There is some natural spreading that helps with the alignment, but this can mean higher power is needed to get a high data rate. As the power of the laser increases, there is also an issue of eye safety requirements that limit maximum transmitter power, even if the system is mounted on top of a tall building.

A number of FSO products exist offering bitrates of a few Gb/s requirements up to a 3 km distance, with a typical performance measured as the bitrate x distance = 3 Gb/s km. A team at the Fraunhofer HHI institute in Germany is aiming to develop an FSO system with 10 Gb/s over 10 km, increasing the performance by a factor of 30.

This could be done by using the 1550 nm frequency, which gives a factor of 50 times better eye safety than for the common 850 nm FSO wavelength, and allows for higher power output. The team is also using components, subsystems, and transmission concepts from fiber technology coupled with wavelength division multiplexing (WDM) to increase the added capacity. Fiber-optic cable and FSO share many similarities, but there is a difference in how each technology transmits information.

Part of the research is to look at the optimum modulation format for FSO, using techniques from RF wireless such as forward error correction (FEC) and digital signal processing (DSP) to increase the reliability of the link.

There are several issues to consider in setting up an FSO link that all feed back into the design of the system.

The main challenge for the FSO network is to counter the impact of fog. Rain and snow have little effect on FSO, but fog is different, because while the water droplets are only a few hundred microns in diameter, they modify the light characteristics or completely hinder the passage of light through a combination of absorption, scattering, and reflection. The primary way to counter fog when deploying FSO is through a network design that shortens FSO link distances and adds network redundancies. FSO installations in foggy cities such as San Francisco have successfully achieved carrier-class reliability.

The absorption causes a decrease in the power density of the beam, attenuating the signal, and can be partially overcome by using spatial diversity with multiple beams within the FSO unit.

The movement of buildings can also upset receiver and transmitter alignment. Using a diverging beam can help solve some of these problems, and some manufacturers are developing tracking systems for ultra-high-speed FSO systems mounted on freestanding towers.

The density of the air itself is also a factor to consider. Heated air rising from the earth or from heating ducts creates temperature variations among different air pockets. This can cause fluctuations in signal amplitude which leads to "image dancing" at the FSO receiver end. A multi-beam system with signal processing can tackle this refractive turbulence that causes unexpected and variable beam wander and beam spreading.

The idea of using existing fiber components to build FSO optical links at 850 nm and 1550 nm is appealing, but there are caveats, mainly in the power that is available from the diode lasers.

The AFBR-732BWZ transmitter and AFBR-742BZ receiver from Avago are high-performance fiber-optic modules for parallel optical data communication applications. These 12-channel devices, operating up to 2.5 Gbd per channel, provide a cost-effective solution for short-reach applications requiring up to 30 Gb/s aggregate bandwidth. These modules are designed to operate on multimode fiber systems at a nominal wavelength of 850 nm, but can potentially be used for short range FSO links. They incorporate high-performance, highly-reliable, short-wavelength optical devices coupled with proven circuit technology to provide long life and consistent service. 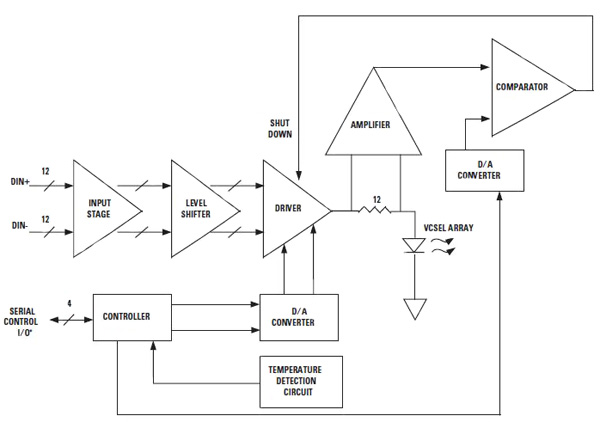 The modules employ a heatsink for thermal management when used on high-density cards, have excellent EMI performance, and interface with the industry-standard MTP/MPO connector systems through a pluggable 10 x 10 connector array.

Within these modules, there will be some level of crosstalk between channels. The crosstalk within the modules will be exhibited as additional data jitter or sensitivity reduction compared to single-channel performance. Avago Technologies’ jitter and sensitivity specifications include crosstalk penalties and represent real, achievable module performance.

The transmitter section, Figure 3a, uses a 12-channel 850 nm VCSEL array as the optical source and a diffractive optical lens array to launch the beam of light. The optical output is controlled by a custom IC, which provides proper laser-drive parameters and monitors drive current to ensure eye safety. An EEPROM and state machine are programmed to provide both AC and DC current drive to the laser to ensure correct modulation, eye diagram over variations of temperature and power supply voltages.

The receiver section, Figure 3b, contains a 12-channel AlGaAs/ GaAs photodetector array, trans-impedance preamplifier, filter, gain stages to amplify and buffer the signal, and a quantizer to shape the signal. The Signal Detect function is designed to sense the proper optical output signal on each of the 12 channels. If loss of signal is detected on an individual channel, that channel output is squelched.

There are higher power laser systems available at 1550 nm. Finisar’s FTLX1812M3BCL is a single-mode 1550 nm transceiver that supports data rates up to 11.3 Gb/s and a reach of 80 km on fiber, allowing margin for shorter PFO links, and is powered from 3.3 V and 5 V supplies. This handles multiple protocols from 10GBASE-ZR/ZW 10G Ethernet and extended 10G and 8G Fibre Channel, but is only rated from 0°C to +70°C. While this works in the data center, it may be limiting for an outdoor application. 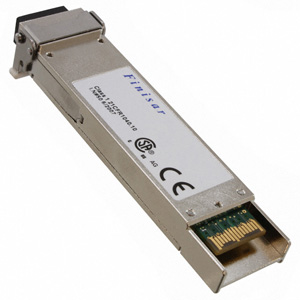 The NX7538BF-AA from California Eastern Laboratories (CEL) is a 1550 nm InGaAsP multiple quantum well (MQW) laser diode module for Optical Time Domain Reflectometer (OTDR) applications that might also be used for FSO designs. The module (Figure 4) is specified to operate under pulsed condition with a high power output of 80 mW. 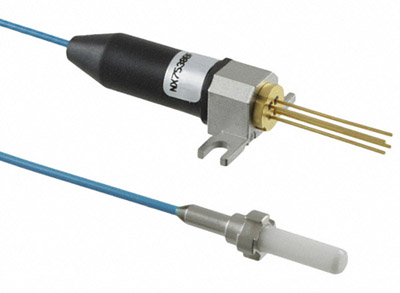 The modulation techniques that are used also make a significant difference, and researchers at Stanford University in the US have been looking at different techniques for using free-space optical communications, this time for indoor systems.

They evaluated the performance of three direct-detection orthogonal frequency-division multiplexing (OFDM) schemes in combating multipath distortion in indoor optical wireless links, comparing them to a unipolar M-ary pulse amplitude modulation (M-PAM) scheme. OFDM is a common technique used in wireless systems, whereas modulating the amplitude of the light pulse to carry the data is a distinctly different technique.

The three OFDM techniques are DC-clipped OFDM, asymmetrically clipped optical OFDM (ACO-OFDM), and PAM-modulated discrete multitone (PAM-DMT). They used an iterative procedure to achieve the optimal performance, quantifying the received electrical signal-to-noise ratio (SNR) required at a given bit rate on a given channel, considering an ensemble of 170 indoor wireless channels.

When ACO-OFDM or PAM-DMT is allowed to use twice the symbol rate of M-PAM, these OFDM formats have better performance than M-PAM. When channel state information is unavailable at the transmitter, however, M-PAM signiﬁcantly outperforms all OFDM formats. When using the same symbol rate for all modulation methods, M-PAM requires approximately three times more computational complexity per processor than all OFDM formats and 63% faster analog-to-digital converters, assuming oversampling ratios of 1.23 and 2 for ACO-OFDM and M-PAM. When OFDM uses twice the symbol rate of M-PAM, it requires 23% faster analog-to-digital converters than M-PAM, but requires approximately 40% less computational complexity than M-PAM per processor.

The market for Free-Space Optical (FSO) networking equipment is not large, but it is growing, tackling the problems of congested networks and costly infrastructure. Some of the problems of atmospheric absorption and scattering are tough to beat, but research into new modulation techniques and the ability to use commercial 1550 nm components that are less susceptible to water droplets will allow the development of interesting new systems.