With the costs of installing photovoltaic solar declining rapidly, the technology is increasingly becoming a realistic solution to support off-grid applications.


Alternate energy systems for electrical generation are a key product development item. As a direct component of product operating cost, the generation and access of the energy to operate it is now part of the design cycle. Nanopower electronics, PZT interfaces for power creations/regulation, and PV are all methods being used for both infrastructure level and mobile devices. The design and application of these energy harvesting options, in context with the rest of the system, is now a key portion of the use model. The development kits allow for concurrent software development of the energy source and the consuming product.

When people talk about “non-battery” powered systems, they first image people think of is the venerable eight digit, four function solar calculator (see Figure 1). These devices went from high technology to a commoditized product, power optimized to a low-cost item that is now available as a giveaway. The key is the reduction in operating power and peak current draw. These changes were implemented by design techniques. Modern mobile devices have power reduction based on both process refinement and design. The result is that larger systems can now be operated inside the power budget provided by alternate energy generation components. 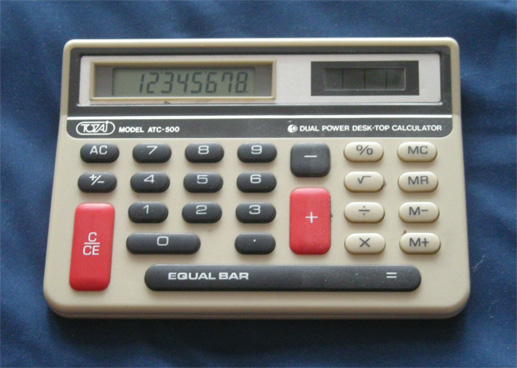 
These new systems need to operate both at low voltage (3.3 V and below) and low current (sub-mA range). To help manage these designs, external power regulators and storage elements are used to hold the power stable while the circuits run. These low-power designs are identified by their typical “cyclic” peak power patterns that result when the logic switches on the edge of the synchronous clock, or when analog signals are latched into the digital interface section. A key performance aspect of these low-power designs is the software development kits that come with them. They allow applications and functions to be built that, when run, keep the electronic systems inside the low-power envelope for which the design is targeted. The systems are available in two forms: turnkey development systems with a power source, low-power electronics and software development kit (SDK), and as standalone low-power products and standalone power generation components which need custom software limits to make the applications works.

Solar power is one of the best known alternative power sources for mobile electronics. The power cells are fairly straight forward to connect in combinations of series and parallel to create the operating voltage and current to support a system. The main issue is the area efficiency of the solar panel, and lensing setup. They tend to be large and invasive on the industrial design for the product. The lensing setup helps determine the effective efficiency in indoor (fluorescent) versus outdoor lighting. To help with the setups, turnkey kits, such as the TI Solar Energy Harvesting Kit (Hotenda part # EZ430-RF2500-SEH Solar Energy Harvesting Development Tool) are available. The TI Solar Energy Harvesting Kit contains the solar cell, energy storage components, and the ultra-low-power MSP430 MCU. This system also includes a development board with indicator lights and USB interface to let the developer create standalone perpetually operating wireless sensor networks. The environment also includes a power optimized CC2500 2.4 GHz wireless transceiver designed to work with the solar cell. 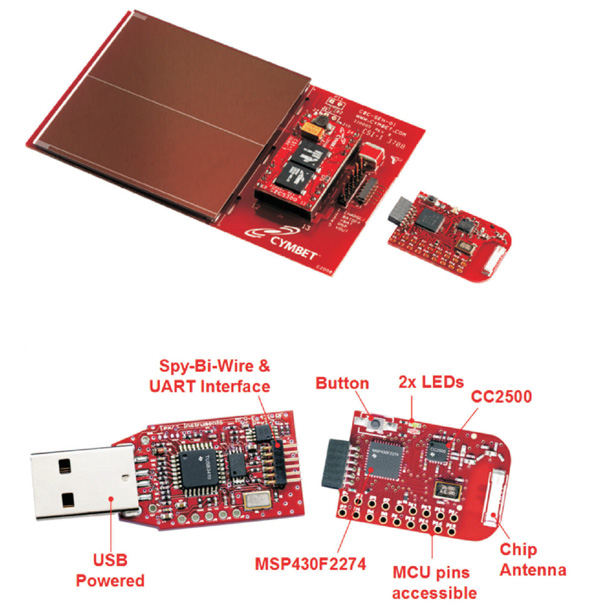 
Figure 2 shows features and components of the development kit. Figure 3 shows the structure and connections on the microcontroller unit board and its connection with the main solar collector unit. The development kit is modular, so you can connect the microcontroller to a battery for functional testing, a USB port for debug and program transfer, and the solar collector module with the energy cell for practical operation. 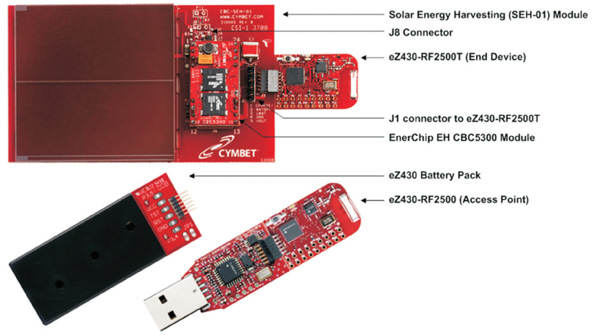 
Other development kits such as the XLP Energy Harvesting Development Board from Microchip Technology also have solar energy harvesting systems. This board design utilizes the Cymbet EnerChip rechargeable energy storage cell. These solid state devices, also available from Hotenda, are an alternative to super-caps and cell batteries. They are capable of providing up to 3.8 V at 50 µAh of current at 100 µA draw. The Microchip evaluation board features a 16-bit version of their PIC processor. These low-power design elements can operate at 35 µA/MHz for the processor, and functions such as real-time clock/calendar operate at as low as 470 nA of current. Once again, this device has on board memory, I/Os, and RF components. It is supported by a software development system that lets you program an application function into the 16-bit processor; it can be used to create prototypes for many application segments. The development kit is shown in Figure 4. 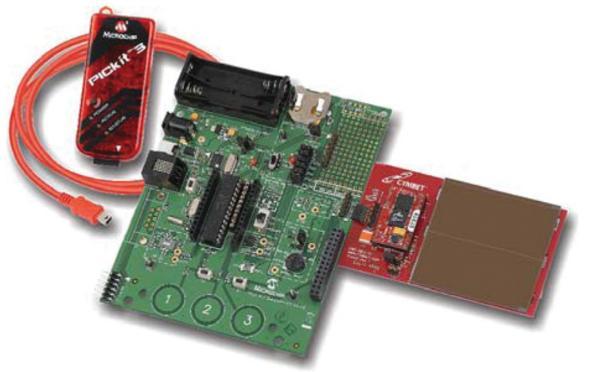 
A key portion of this and many of the development kits is the application software development portion such as the Microchip/Cymbet Energy Conscious software program. The power budget for various tasks is identified, and the software allows the designer to plan when and which blocks are “on”, either by themselves or in combination, along with the energy harvesting status of the charge/discharge state. As power sources in most alternate energy systems are transient and not necessarily at peak levels during the use of the electronics, draw down of the stabilizing power element (super-cap, energy cell, etc.) is a high priority.

In addition to the development kit, individual components for solar harvesting are also available from Hotenda. These include solar collectors from Clare, IXYS Corporation, Parallax, Inc. and Sanyo Energy; connectors from TE Connectivity, Molex and Amphenol Industrial; thermal management from National Semiconductor (now TI), and supercaps/ultracaps/energy cells from AVX Corporation, Cooper, Nichicon, Panasonic, Seiko Instruments, Inc., and many others. As the images of the development kit examples show, standardized modules such as the Cymbet Eval-08 Solar Energy Harvester are used by multiple vendors and can be used as a basis for custom applications as well.

There are techniques, other than solar for creating energy, to run sensors and systems. One of the more common methods is the conversion of movement and pressure using high-impedance sources such as piezoelectric transducers (PZT). Linear Technologies makes a single-chip piezoelectric energy harvesting power supply, the LTC3588. The LTC3588-1 integrates a low-loss full-wave bridge rectifier with a high efficiency buck converter to form a complete energy harvesting solution optimized for high output impedance energy sources such as PZTs. A schematic of how to construct a PZT energy harvesting system using the LTC3588 is shown in Figure 5. 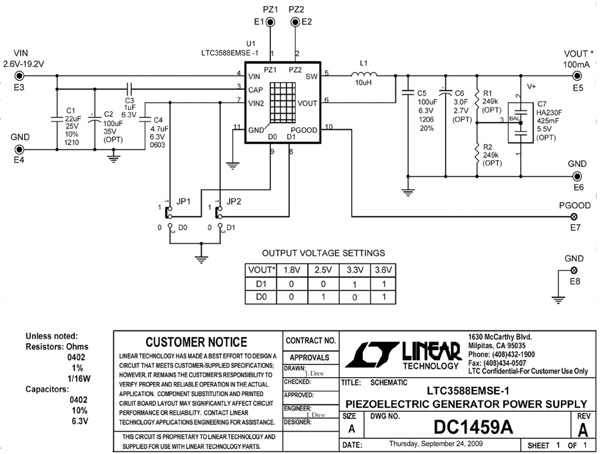 
There are a number of different PZT devices that are available from manufacturers such as Volture. These devices create an electrical signal based on the direction and amount of deformation of the sensor. The devices from Volture are dual devices that can be connected either in series or parallel depending on the desired output voltage and/or output current to feed a regulator circuit. The operation and connection of the PZT sensor is shown in Figure 6. The nominal configuration for the PZT device is to connect it as a parallel configuration. This gives a single voltage level output at double the current and double the capacitive load. Most follow up circuits have a challenge of not having much current in the power equation to feed a full design. New system electronics have been scaled to work at a lower voltage level, but the size and performance capabilities are directly scaled with the amount of current that is available. 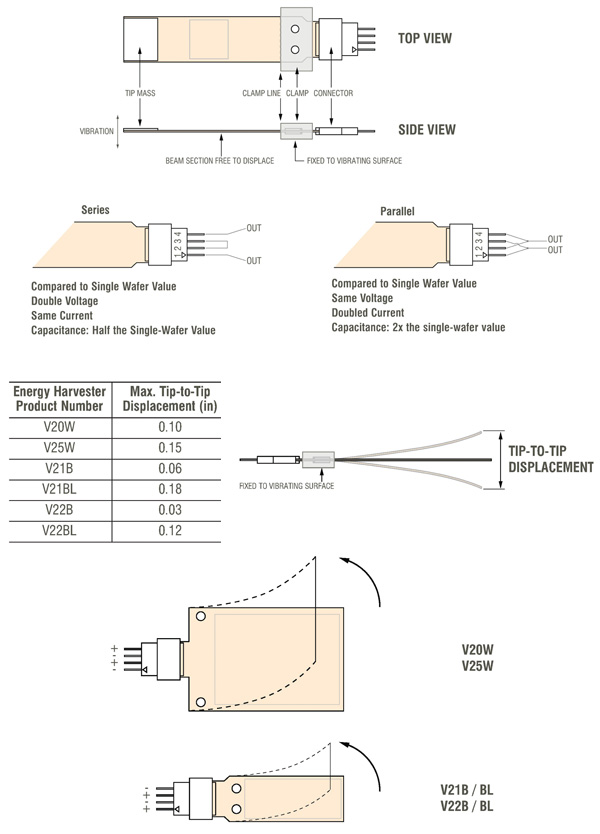 The structure of the alternate energy systems includes a collector element (solar, PZT, wind, etc.) which creates an electrical signal. This signal then goes to a rectifier/regulator to convert the waveform to a DC signal. The resulting DC signal is then filtered to eliminate noise and provide a control function, and eventually gets stored in a voltage-based element. These storage elements range from simple caps and inductors to batteries, super-caps, and energy cells. The outputs of these storage reservoirs are then connected to standard DC-DC converters and regulators for connecting to the system electronics.

These elements are standard products that are used for both energy harvesting and non-energy harvesting applications. The dominant member of the family is the power regulation and control group which may take the energy stored in the “reservoir” element and distribute it at a fixed voltage with variable current. Most of these harvesting systems have the challenge of merging found energy together in a central repository to create a single source power draw. These regulation components make up a class of parts called power management ICs (PMICs). They contain DC-DC switching controllers and regulators, low dropouts (LDOs), linear and switch devices, and large power transistor devices. Hotenda carries over 40 suppliers of the devices that support the power generation space with maximum output currents ranging from µA levels up to 8 A. Single chip regulators are a standalone technology that has common elements – low-pin count (less than six pins); packages that support heat sinks; and high reliability as they are the constant “on” portion of the end circuit systems.

Large scale systems that include high current and high power levels generally do not use single chip integrated regulators and rectifier systems. Instead, they use discrete or paired power devices to create the high voltage bridge. For larger scale solar power systems, solar power inverters (DC-AC conversion) and wind generation systems, the use of power discrete transistors is the norm. Hotenda carries power devices that can handle currents from the 100 µA range through the 60 A range and voltages up to 1200 V. These devices are available as JFET, BJT and IGBTs from many suppliers (over 40) which include STMicroelectronics, IXYS Corporation, ROHM Semiconductor, ON Semiconductor, Fairchild Semiconductor, and National Semiconductor (now Texas Instruments).

The need for alternate energy generation is growing, especially for mobile devices. The scope of the system design now has to include interface to power sources as well as the standard function. Hotenda has development solutions and components available for PV, wind, and PZT-based energy harvesting methods which cover the majority of the energy creation options. There are also power regulation and storage devices and technology available that can convert the collected energy into a usable power supply source for computation, RF communication, and display electronics. As products are deployed around the world and in developing areas, the access to non-wall-cord power becomes a requirement and is no longer an optional accessory.