This article looks at advanced buck-boost converters that can squeeze out much of the available stored energy within a battery cell.


Many security and motion detector systems rely on small, semi-autonomous nodes that are easy and simple to install. This implies the use of a battery-based power source and low-power operation in order to minimize the number of battery changes during the lifetime of the product.

Over its lifetime, the output voltage of a battery falls, with the biggest decline when the charge is nearing full depletion. A converter type that can accommodate this change in voltage but can still provide relatively high voltages for sensors and RF transmitters is the buck-boost converter – it operates the buck part of the circuit when the battery is fresh, moving to boost operation when the voltage falls below the threshold of the electronic circuitry it powers. A number of vendors have developed integrated buck-boost converters optimized for battery systems and this article discusses a number of them, including devices from ams, Analog Devices, Linear Technology, ON Semiconductor, and Texas Instruments.

Motion detection has become an integral part of the modern security system, watching for signs of intruders at times when the home or office should be empty. Over time, we will see new applications that will extend motion detection into everyday life, allowing us to control lighting and media devices through the use of gestures. Devices spread around the home will watch for those key gestures, using advanced signal- and image-processing techniques to discriminate between natural actions and gestures that are important to the system.

An important link between these systems is the need for distributed, low-energy sensors that can run from batteries to avoid the need to rewire the home to install new systems. They communicate with each other and central processing nodes using low-power radio protocols and use various forms of sensing technology, such as ultrasonic or low-resolution video, to analyze the motion of people.

Some types of sensor require high voltages to operate that cannot be generated from the battery cells themselves, or there may be a requirement for a backlight LED or a built-in status display, which needs a high-voltage power source to operate. One option for a step-up or boost regulator is the ON Semiconductor NCP1403. The device is designed to boost a single lithium-ion cell or two AA or AAA cells up to voltages as high as 15 V.

In systems that use low-voltage sensors, it is still desirable to have the step-up function available. Simple low-power operation is not enough to eke out the life of a battery. The discharge profile of a typical cell means that it will only deliver its peak voltage at or near the full charge. As the battery discharges, its output voltage will fall, potentially below the supply voltage for which the system has been designed. There is often a very large drop close to full depletion. However, the battery still has energy it can deliver if the surrounding circuitry can make use of it. In reality, the battery rarely empties before it needs changing – it simply cannot deliver usable energy. For example, a 1.5 V AA alkaline cell will generally be considered ‘empty’ when its output voltage falls below 0.9 V. 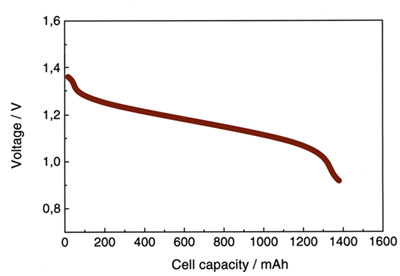 
In practice, cells are often used in combination to boost their voltage output, making it easier to operate a typical microcontroller and RF circuit over a significant portion of the cells’ total energy. Conversely, with a fully charged set of cells, the voltage is generally too high for the sensor node’s circuitry. As a result, most designs use some form of buck regulator to control the supply voltage to the rest of the system and adapt to the falling output from the cells. Because the input voltage needs to be higher than the output voltage of the buck regulator, there comes a point at which it cannot derive sufficient voltage from the battery pack and the system will shut down even though energy is available. To make full use of this stored energy, it is possible to switch over to a boost regulator to provide the necessary output voltage. The efficiency of the boost regulator most likely will be lower than that of the buck, but it provides an extra burst of life for the system. The sensor may report to the user at this point that it is nearing time to change the batteries.

Vendors have responded to the need for more flexible battery-powered systems by integrating the functions of buck and boost regulators into one control unit, automatically switching from one mode to the other based on the state of the battery pack. In these designs, typically there are two pulse width modulation (PWM) loops. The duty cycle of each is controlled by a separate ramp signal. Comparators are used to analyze the output signal of an error amplifier to determine when a switch should be flipped to create the next phase of the PWM waveform. 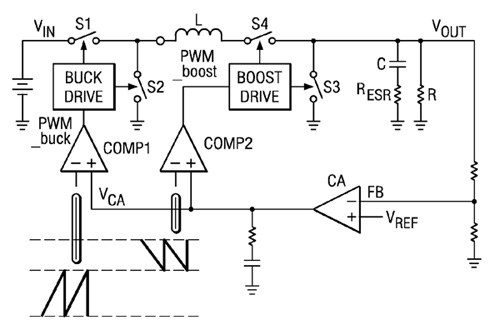 
The ams AS1337 is designed to run from two AA alkaline cells in buck or boost modes, supplying a constant voltage of 3.3 V at 200 mA. It is a fixed-frequency design using current-mode PWM control for good line and load regulation. Like other components in its class, the regulator includes support for power-save mode in which PWM activity is temporarily suspended. An optional capacitor can be used to reduce output-voltage ripple.

In conventional buck-boost converter designs, when the input voltage approaches a range that is close to the output voltage, the operating mode will shift from buck to boost. However, there is the potential for a discontinuity when the modes switch over, which can result in a pause in the PWM signal and the generation of low-frequency noise. One solution is to operate the converter in both modes in an overlapping region.

Linear Technology’s LTC3530 is an integrated buck-boost converter that operates over an input-voltage range of 1.8 V to 5.5 V using a switching algorithm to move between buck and boost modes. The design is suited to systems that use two AA cells or a single lithium-ion or lithium-polymer source and uses a conventional buck-boost mode for the situation where the input and output voltage are close. When in this mode, all four internal switches – two from the buck and two from the boost section – will operate.

The switching frequency of the LTC3530 can be programmed using an external resistor, so that the converter can be optimized for the space and efficiency requirements of the target application. The device’s power-save mode is entered at a current level that can be programmed by the user to improve light-load efficiency. 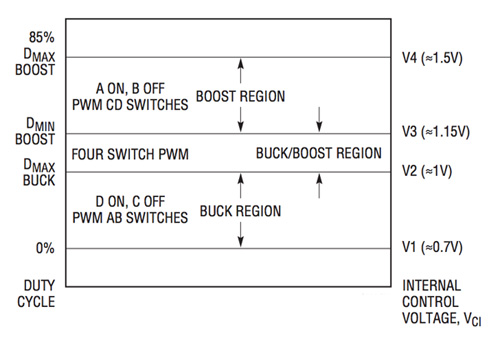 Figure 3: Buck, buck-boost, and boost modes and how they switch in at different points of the discharge curve on a typical four-switch buck-boost converter.


The Analog Devices ADP2503 will run from voltages between 2.3 V and 5.5 V, allowing use with single lithium-based cells or multiple AA or AAA cells. The design offers a combined buck-boost mode for situations where the input and output voltage are close together to provide good regulation and maintain minimal current ripple in the output stage.

With an external synchronization signal, the regulator will slide to the applied frequency as long as it is switching in the 2.1 MHz to 2.9 MHz range. Without an external frequency source, the device can enter power-save mode in which the PWM control is disabled temporarily to avoid switching losses. When the load current exceeds 150 mA, the device exits power-save mode and resumes normal operation. This current level is set above the power-save threshold to provide a level of hysteresis and avoid oscillation between the two modes.

One potential issue with four-switch operation is a reduction in efficiency, which is undesirable in battery-powered systems. The fall-off in efficiency comes as a result of operating four switches – and suffering their total switching losses – rather than the two dedicated to the buck and boost modes, respectively. Potentially, because the voltage/discharge curve of a battery is quite flat over much of its range, the overlap region can be in use for a large proportion of the time. The result is shortened battery life versus what is possible with more intelligent control over the shared, buck-boost mode.

An example of an integrated buck-boost converter that attempts to deal with these issues is the Texas Instruments TPS63020. Designed for systems that are powered by two- or three-cell alkaline, NiCd and NiMH battery systems or single-cell lithium-ion or lithium-polymer systems, the converter can deliver currents up to 3 A to cope with peak power outputs – such as when a detector is taking readings and transmitting data – and will work with output voltages down to 2.5 V and below.

The TPS63020 switches automatically between buck and boost modes with one active switch and one rectifying switch. One switch is permanently on and the remaining switch is permanently off in either mode, reducing overall switching losses. There is no state in which all switches are active for more than a clock cycle. In this device, the ramps are moved away from each other if the regulator determines that all switches should become active within a single clock cycle. However, if the ramps move so far from each other that there is no switching activity, they are shifted closer together so that normal PWM operation can resume. This behavior results in a large reduction in conventional shared buck-boost cycles.

The controller circuit uses an average current-mode topology with changes in both input and output voltage constantly monitored. Changes in voltage are fed through to the modulator to alter the duty cycle to achieve a fast response. For maximum efficiency, the converter uses synchronous rectification using a fixed-frequency PWM controller. There are four N-channel MOSFETs in the device to reduce the need for external components down to an inductor used for energy storage and output smoothing.

At low load currents, like a number of other devices, the converter can enter a power-saving mode that temporarily disables PWM activity, reducing energy wastage through switching losses. During power-save mode, the output voltage is monitored by a comparator to re-start operation when it falls below a safe threshold. PWM operation stops when the output voltage is slightly above the nominal. The converter switches out of power-save mode when the average inductor current climbs above 100 mA. For systems that need tighter voltage tolerance, it is possible to disable power-save mode completely.

By adapting to the voltage profile of today’s battery technologies, advanced buck-boost converters can do much to deal with novel sensor types and eke out much of the available stored energy within each cell. Advances in controller design – such as techniques to reduce the losses in buck-boost mode – are further improving efficiency.