"Garbage in, garbage out" doesn't just apply to computer programming. The quality of the light produced by an LED is directly related to the quality of the drive’s voltage and current, which makes the drive circuitry just as important as the emitter. For low brightness LEDs, linear regulators can generally do the job. High brightness applications present more stringent performance specifications, prompting engineers to select more sophisticated solutions, such as switching regulators, switched capacitor converters or flyback converters. Of this group, step down, or buck, switching regulators are usually the first choice because they are simple, efficient and easy to stabilize. A buck regulator can provide impressive cost/benefit performance when properly specified and designed into a system.

LEDs are direct-bandgap semiconductors, and their output varies nonlinearly as a function of voltage (Figure 1). The threshold voltage, or forward voltage (Vf), differs slightly from device to device for any type of LED. Even for a single device, Vf drifts as a function of temperature and age. In contrast, output as a function of drive current is linear for any device, so driving LEDs with a constant-current source provides optimal performance. 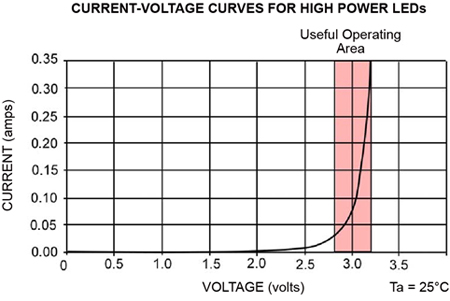 
Drive circuitry is often an afterthought, especially for lighting designers. Focusing on the illumination aspects of the design and leaving the power aspects for the end may compromise performance and manufacturability.

"[Designers] want to make their fixture look a certain way and generate a certain amount of light," says Alex Craig, application systems engineer for lighting, Fairchild Semiconductor. "As a result, they might put six LEDs in parallel, but six LEDs in parallel are likely not as efficient as six LEDs in series." Smart engineers take a holistic design approach by developing an efficient lighting configuration that lends itself to common power topologies.

Ideally, each LED is driven by the same current, which generates consistent output across a string. As discussed in the first article of this series, constant-current drive solutions can be as simple as a voltage source and a ballast resistor or linear regulator. However, simple isn’t always better. As voltage rises, so does heat dissipation across the resistor, which reduces both efficiency and lifetime of the LED. No matter the price, these designs may not best serve the application because cost control encompasses more than the amount of money spent on parts in high brightness applications. The price of changing a lamp in the high bay of a semiconductor fab or atop a 300-foot power pole at a freeway interchange can far exceed the amount of money saved on components. In these cases, a switched-mode power supply may provide a better solution.

In a switched-mode power supply, the power switch turns on and off at the frequency required to maintain a constant, user-defined output voltage and in a process somewhat analogous to the way the thermostat maintains quasi-constant heat in a room. Depending on the design, an LED driver based on a switching regulator can boast efficiencies as high as 95 percent. The tradeoff is that the switching process imposes a saw tooth-like ripple on the output. To compensate, switching regulators typically feature an inductor to smooth out current variations and a capacitor to damp changes to load voltage. The larger the capacitor and inductor, the greater the smoothing effect, but this adds size and cost. Designers need to weigh the demands of the application to determine how far to push the process.

Buck regulators can be turned into constant-current sources. The current through the inductor is essentially the same as the load current in a buck regulator. This relationship allows the user to set the load current by defining the peak-to-peak ripple in the inductor current. This can be done by adjusting the switching frequency or duty cycle of the device with the aid of feedback (i.e., from a current-sense resistor). 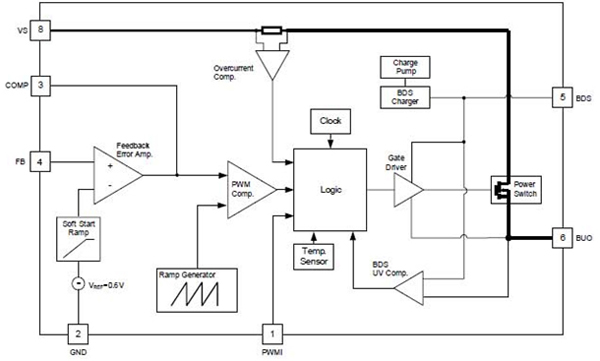 Figure 2: A buck regulator provides 1.5 A of output current, which is stable within two percent.


The efficiency of buck regulators varies much less with changing voltage than with linear regulators. Whether the load voltage is two or 10 V below that of the power supply rail, a buck switching regulator will deliver similar efficiencies. However, lower voltage means higher efficiency. So designers should match the source to the load for best results.

The devices are economical and relatively simple to use, especially as integration increasingly streamlines the design process. For example, the LM3414 from National Semiconductor sports an integrated current-sensing resistor to provide 1 A of average drive current with an accuracy of ±3 percent and switching frequencies as high as 1 MHz (Figure 3). The LM3414 also boasts internal stabilization, which eliminates the need for an external compensation loop.

"The buck is the most simple, cost-effective, and efficient switching regulator," says Clinton Jensen, applications engineer for lighting products at National Semiconductor. "If it’s designed correctly, it looks almost like an ideal current source. If you can, you should definitely use the buck." 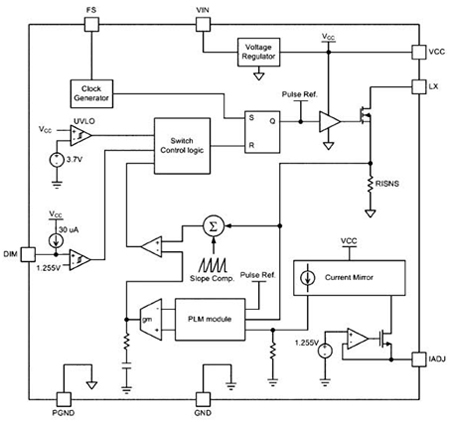 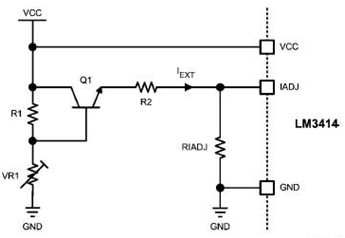 Figure 4: Add this external biasing circuit with a variable resistor to the LM3414 for analog dimming.


Challenges often happen in some of the most basic aspects of circuit design. "Layout is a key issue," says Jensen. "If you don't have solid return paths for the current, then all of a sudden your output has very large spikes that can ring out at multiple megahertz. You can overvoltage the switch, you can overvoltage the current-sense pin, and basically have anything from a little bit of LED flicker to a destroyed device."

"You've got to be very good about how you position the components because sometimes you can induce a lot of problems that make the circuit fail," agrees Brian Johnson, technical marketing manager at Fairchild Semiconductor. "If you're sensing current, you don't want to have another coupling path that might give you false readings. And I can't overemphasize the need to consider thermal management. If you're designing something that’s going to go in a place where there is a lot of insulation, or outdoors with extreme temperatures or dust storms, be aware of the environmental issues. You need to know more than just how to design a buck circuit. You really need to understand your end solution."

Buck switching converters are simple, efficient and cost-effective. They are a good option for a wide range of applications. "The buck is the best," says Jensen. "You should use it whenever possible."

In some cases, you need to raise the input power, either continuously or intermittently. When doing so, a boost-or buck-boost regulator may provide a better alternative.

The third article in this series on LED driver circuitry will discuss boost- or buck-boost regulator options, as well as other alternative architectures. It also will focus on performance, design considerations and pitfalls to avoid.