As electronic systems continue to trend toward lower voltages with higher currents, the power systems designer is challenged to provide small, cost-effective, and efficient solutions that offer the requisite performance.


As electronic systems continue to trend toward lower voltages with higher currents, and as the speed of contemporary loads such as state-of-the-art microprocessors, ASICs and memory continues to increase, the power systems designer is challenged to provide small, cost-effective, and efficient solutions that offer the requisite performance. Helping engineers to meet these challenges, the infrastructure supporting current trends in electronic systems has evolved as well. For example, power infrastructure has advanced from centralized power architecture (CPA), to distributed-power (DPA), and intermediate bus architectures (IBA), with each scheme offering its own set of advantages and disadvantages.

In essence, as shown in Figure 1, traditional distributed architecture proposes a DC bus voltage that drives point-of-load (POL) converters. The POLs further step-down the DC bus voltage to the desired level required by the electronic load. These myriad distributed schemes require a different combination of AC/DC front-ends which convert the input AC mains voltage to a fixed DC voltage, which is then further stepped down using isolated DC/DC converters or bricks. Indeed, bricks have been facilitating various power schemes by providing isolated regulated/semi-regulated DC/DC converters in a variety of standard off-the-shelf formats, which include half, quarter, eighth, and sixteenth brick models. 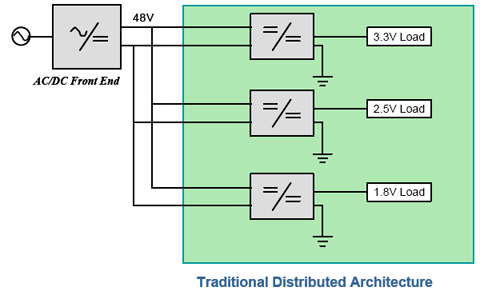 Figure 1: Traditional distributed architecture proposes a DC bus voltage that drives the point-of-load (POL) converters. The POL further steps down the DC bus voltage to the desired level required by the electronic load.

Bricks are generally available with output power ranging from approximately 50 W up to several hundred watts. The output power in a standard form factor depends on factors such as output current and voltage, the input voltage range, switching frequency, and the conversion efficiency.

Selecting an optimum isolated brick DC/DC converter for an application can be challenging as there are a number of factors that a designer must consider before choosing the most appropriate brick solution. Some of the factors include output power, power density, transient response, conversion efficiency, and packaging.

Because standard off-the-shelf bricks have already been tested and are available from multiple sources, they can lower system development costs as well as shorten the design cycles. And, if the system's power requirements change, bricks can be easily replaced.

Unlike CPA, the DPA approach converts the incoming AC power line to a standard DC bus voltage, which is usually 24 or 48 V but less than 60 V, followed by isolated multi-output DC/DC converter bricks. Compared with CPA, DPA reduced the I²R losses associated with transmitting low voltage around a system and improved dynamic response. It also greatly reduced or even eliminated the need for heat sinks. Before long, however, with the growing number and complexity of loads, conventional DPA was seen as becoming less efficient and occupying too much space. As a result, IBA was introduced to lower the DPA DC bus voltage to a value that is typically 12, 9, or 5 VDC. This is accomplished using intermediate bus converter (IBC) bricks that convert the high distributed bus voltage to a lower voltage, as depicted in Figure 2. 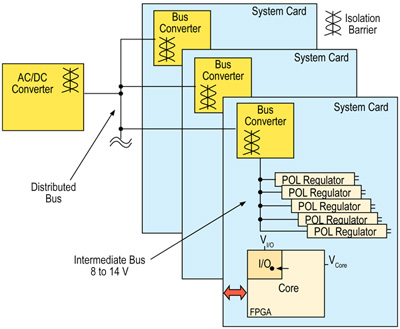 Besides providing isolation from the 48 V bus, it also reduces the 48 V bus to a level where non-isolated converters can operate with a reasonable duty cycle without the need for a transformer. Non-isolated buck regulators, commonly referred to as point-of-load (POL) converters, then generate each of the load voltages needed from this intermediate bus. Also, the rationale behind the lower intermediate DC bus is that it can offer a better than 10:1 step-down ratio for optimum performance. Keeping the 10:1 conversion in mind, a 5 V IBA bus voltage is preferred for sub-1 V POL loads.

Vicor, for example, offers IBC bricks rated at up to 500 W from 36 Vin and up to 850 W from 55 to 60 Vin, conforming to industry standard eighth- or quarter-brick footprint. They enable full-load operation at 55°C with only 200-LFM airflow.

With on-board voltages proliferating, DPA and IBA schemes require increasing number of bricks. Furthermore, IBA also places a lot of bulk capacitance on the output of each non-isolated POL to store the energy needed when there is a sudden increase in load demand. To overcome the limitations of DPA and IBA approaches, Vicor created a proprietary solution called the FPA architecture. Aside from simplifying the task, Vicor’s FPA approach, along with its enabling components, integrated power components called V•I Chips offer the power architect a new way to solve design problems.

FPA uses a higher bus voltage, and moves bulk capacitance from the POL's output to the input, reducing the amount of capacitance needed by the square of the step-down ratio.2 The regulation function can reside anywhere in the system, instead of at the point of load. FPA also makes it easy to regulate the load voltage through the isolation barrier without long, noise-sensitive feedback lines or opto- or magnetic couplers.

There are two types of FPA modules. Taking power from the 48 V system bus upstream, the pre-regulator module (PRM) is a high-Vout buck-boost regulator that provides a controlled, non-isolated FPA bus voltage to the second module, called the voltage-transformation module (VTM). Load regulation is performed using feedback to the upstream PRM. The PRM adjusts its output to maintain the load voltage in regulation (Figure 3).

Vicor offers a portfolio of VI BRICK VTMs and PRMs, optimized for different nominal input and output voltages, and packaged for power capabilities that can generate a variety of power conversion solutions.

Distributed-power schemes require different combinations of AC/DC front-ends that convert the input AC mains voltage to a fixed DC voltage, which is then further stepped down using isolated DC/DC converters or bricks. In order to facilitate the power infrastructure’s shift to the various distributed architectures, suppliers have committed to delivering a full portfolio of brick products to meet the demands of virtually any application. This article has examined DPA, IBA, and FPA architectures and has presented products that are well suited to the power designer’s needs. To obtain more information on these products, use the links provided to access product pages on the Hotenda website.