Two of the biggest issues for any lighting-system designer are design complexity and cost. They are also the biggest barriers to the adoption of LED lighting. Fortunately, LED manufacturers are addressing these two issues in a number of new ways: they are looking at better heat dissipation, developing chip-on-board (COB) designs, and improving light output. In addition, suppliers have achieved performance and cost breakthroughs by developing new architectures and designs that do a number of useful things, such as enhance light output, reduce space, lower cost, and reduce design complexity.

Two examples of the latter include Cree’s new SC5 technology platform that doubles the light output of high-power LEDs to significantly lower cost, and Philips Lumileds’ LUXEON CoB line, which recently added the LUXEON CoB 1202s that are said to deliver leading-center-beam candle power (CBCP) in a compact array. The company’s LUXEON CoB arrays with CrispWhite Technology have been called “game-changing” for retail downlights and spotlights. However, it’s not all about aesthetics. The LUXEON CoB arrays reduce the cost of luminaire designs and reduce requirements for heatsinks.

One of the big changes happening in the LED industry is the move by some LED manufacturers to focus on other components like the heatsinks, optics, and printed circuit boards (PCBs) in the LED lighting system to lower total system cost. One of the biggest proponents of this approach is Cree Inc. “There is a general understanding still in the LED lighting community that came from historical truth that LEDs used to be the most expensive part of the system and so whoever could buy the cheapest LED had the cheapest system,” said Paul Scheidt, leader of product marketing, LED components, Cree. “That used to be true about three or four years ago, but the cost of LEDs have come down to such a point where LEDs are no longer the most expensive part of the system.”

“Your LEDs aren’t affecting your system costs as much as other parts in the system are now,” said Scheidt. “Most people are paying more for the heatsinks or PCB than they are for the LEDs, so you have to look at how does the design of the LED affect how much PCB, heatsink, and optics you need because those are the things really driving the system cost.”

This approach was part of the genesis behind Cree’s SC5 technology. “The breakthrough is not that we made a much cheaper LED. We’ve taken the price point and performance where LEDs are right now and brought a lot of improvements to the LED,” added Scheidt.

“It’s all about reducing cost. The lower the price can go the faster we can have adoption of LED lighting,” commented Scheidt.

Another big factor is reliability. “An LED that can run hotter means you need less heatsink than another LED that has to run cooler. It’s no different than any other power semiconductor,” said Scheidt.

Cree recently launched its next-generation SC5 Technology platform that doubles light output and is said to significantly lower system costs. Described as redefining high-power LEDs for lighting, the first in a series of new lines based on the SC5 technology is the Extreme High Power (XHP) LEDs that can reduce system costs by up to 40 percent in most lighting applications, explained Scheidt.

The new Cree XHP parts can run hotter and still deliver a long lifetime. With the higher operating temperature, the XHP parts enable up to a 60 percent savings in heatsink costs (Figure 1), according to the company. For previous-generation LEDs with the same amount of light output versus the new XHP, Cree has been able to improve the lifetime by almost double under the same conditions, which translates to 50,000 hours of lifetime to L90, which is only a 10 percent degradation from initial condition. 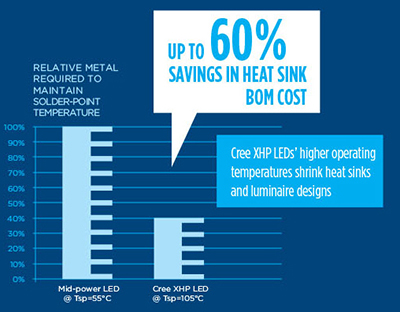 Figure 1: The higher operating temperatures of the Cree XLamp XHP LEDs enable up to a 60 percent savings in heatsink costs. (Courtesy of Cree)

The new XLamp XHP50 and XHP70 LEDs provide twice the lumen output, along with improved reliability, compared to previous LEDs of the same size. Described as a game changer by addressing how thermal, mechanical, and optical elements influence the total cost of the lighting systems, the XHP LEDs allow lighting manufacturers to significantly reduce the size and cost of their lighting system design by using fewer, more reliable LEDs to achieve the same brightness.

This means the XHP LEDs require fewer optics, a smaller PCB, a smaller housing and less handling (Figure 2). In addition, they also achieve longer lifetimes even at higher operating temperatures and currents than previous LED technology, which means lighting manufacturers can reduce the size of the heatsink and cost without impacting the rated lifetime. 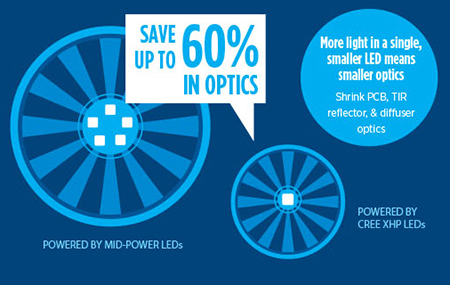 Figure 2: Cree’s XHP LEDs with a higher light output in a smaller package enable the use of a smaller PCB, TIR reflector, and diffuser optics. (Courtesy of Cree)

These advancements are achieved through the SC5 Platform that consists of silicon-carbide technology and advancements in epitaxial structure, chip architecture, and an advanced light-conversion system optimized for best thermal and optical performance.

Thanks to improvements in the light-conversion process, Cree also reduced LED-to-LED color variations and offers XHP LEDs in 2- and 3-step EasyWhite bins for 3500 K through 2700 K in 80 and 90 color rending index (CRI). In addition, a new package allows manufacturers to choose either 6 V or 12 V configurations from the same LED through the solder-pad design on the circuit board.

Similarly, Philips Lumileds also looks at the total cost issue as part of driving LED adoption. “We’re trying to look further than the LED to help customers make a cheaper system by helping them with the optics and drivers and providing low thermal resistance,” said Eric Senders, product line director at Philips Lumileds.

In addition, the LUXEON CoB parts are easier to use in applications due to their more robust MCPCB package that allows the parts to be screwed down directly on the heatsink. In comparison, other CoB LEDs in the market that use ceramic as a carrier often experience cracking when handling the parts, said Senders.

Standardization is also helping to drive down costs by providing IC driver, optical, and holder manufacturers with standard sizes to fit into the CoB range. “If there is a lot of supply of these parts then the price will go down,” said Senders, who added that it’s not only about cost, it’s about providing a good quality of light.

One example of Philips Lumileds’ quality-of-light breakthroughs is aimed at retail downlights and spotlights. The CrispWhite technology (Figure 3) makes whites appear more vivid and bright and colors appear saturated. Lumileds was able to enhance the white perception and keep the high CRI by adding a second blue peak in the spectrum (~410 nm). The CrispWhite spectrum is only activated in materials that contain active fluorescent whitening agents, which includes all fabrics, clothes, and paints, according to Lumileds. 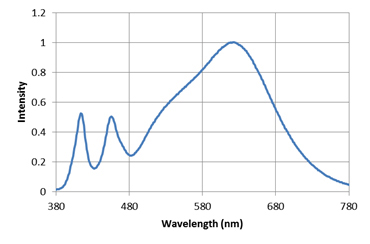 Figure 3: To enhance the white perception and keep a high CRI, Lumileds added a second blue in the spectrum (~410 nm) of its CrispWhite technology. (Courtesy of Philips Lumileds)

In addition, all CrispWhite versions are available within 3-step MacAdam Ellipse below the Black Body Line (BBL), making it suitable as a replacement for ceramic-discharge metal-halide (CDM) lamps, which are traditionally used in retail lighting applications. To ensure uniform optical performance, all LUXEON CoB LEDs are available in 3-step (80 and 90 CRI) as well as 5-step (70 CRI) MacAdam Ellipse.

In addition, the LUXEON CoB with CrispWhite Technology (Figure 4) is available in multiple lumen packages, from 800 lumens for MR16 and PAR lamps, up to 7000 lumens to replace 70 W and 100 W CDM solutions. The lumen values in the CoB range represent the traditional lighting lumen packages, such as for 35 watt and 75 watt CDM lights, said Senders.

The CoB line also offers a very broad portfolio of color temperatures to help meet demand for very-low CCT/CRI combinations, especially in hospitality, that use halogen or incandescent lamps that are typically dimmed in these applications, said Senders.

“When you dim a filament, the color temp that is normally at 2700 K drops to about 2200 K. When a CoB LED or a LED is dimmed, the color temp is still at 2700 K and the LED cannot be used because it doesn’t provide the same effect as the old-fashioned lighting that is used today,” he said.

So, Lumileds launched color temperatures at 2200 K and 80 and 90 CRI to enable the hotel and hospitality market to adopt LEDs, said Senders. Lumileds expects to continue expanding the CoB LED family aimed at specific applications.

Another example is the LUXEON CoB 1202s developed for spotlights and directional lamps. The line is also available with CrispWhite Technology. Delivering industry-leading center-beam candle power (CBCP) at 65,000 candelas at a 10˚ beam angle, the CoB 1202s produces light output in a 6.5 mm LES package that was only previously available in 9 mm arrays. In addition, the LUXEON CoB products, including the latest 1202s, are available in a 2200 K version.

Philips Lumileds also offers higher-lumen packages for industrial and outdoor applications.  The LUXEON CoB 1211 can replace 70 W and 100 W equivalent CDM lamps.  The LUXEON CoB 1211 delivers efficacy of 100-130 lm/W, depending on the color temperature and CRI of the luminaire.  The LED achieves cool-white output exceeding 10,000 lm and 100 lm/W at 70 CRI in a light-emitting surface (LES) of 19 mm.

Lighting system designers looking to reduce both design complexity and cost, while delivering a high-quality lighting solution, need to take a look at the total system cost as the price of LEDs are no longer the most expensive part of the design. It’s a matter of evaluating the new LEDs available in the market that take into consideration the total bill of materials, including the heatsink, optics, and PCB, along with advancing performance, which includes improving light output in smaller packages.