Both shipments and new orders for rigid printed circuit boards and flex circuits grew strongly in June compared to May. 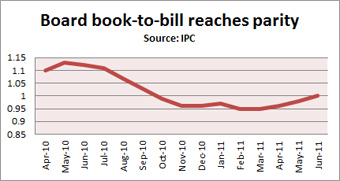 Shipments increased 14.4 percent and bookings of new orders increased 11.5 percent in June, according to IPC. The book-to-bill ratio in June for rigid PCBs and flexible circuits was 1.00. A book-to-bill ratio of 1.00 means that for every $100 of products that board manufacturers shipped, they received $100 in new orders. If the ratio increases to more than 1.00, it indicates that demand is stronger than supply.

“The industry’s book-to-bill ratio has returned to parity due to unusually high growth in flexible circuit orders in June,” said IPC President and CEO Denny McGuirk. “This indicates strong sales in the flex segment over the next several months. Rigid PCB sales growth is still positive, but trending downward due to weaker orders.”

Flexible circuit sales typically include value-added services such as assembly. In June, flexible circuit manufacturers in IPC’s survey sample indicated that bare circuits accounted for about 48 percent of their shipment value reported for the month.