Board Shipments and Orders Increase in February

Demand for flexible circuits is expected to grow over the next several months.

"North American PCB sales continued to grow in February, despite the declining book-to-bill ratio in the rigid PCB segment," said IPC President & CEO Denny McGuirk. "In rigid PCBs, sales have been growing faster than orders for the past six months, but the opposite is happening in the flexible circuit segment." 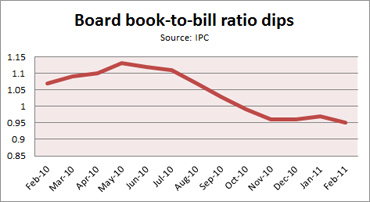 McGuirk said sales in both segments are strong and showing normal seasonal patterns, but there will likely be stronger demand for flexible circuits in the coming months. The book-to-bill ratio and growth rates for rigid PCBs and flexible circuits combined are heavily affected by the rigid PCB segment. Rigid PCBs represent an estimated 89 percent of the current PCB industry in North America.