There are many wireless protocol options for low-power wireless sensor networks, but none are better suited to the task than Bluetooth low energy

There are many wireless protocol options for low-power wireless sensor networks, but none are better suited to the task than Bluetooth low energy.

Wireless solutions are used in a variety of demanding industrial applications. Technologies such as Wireless LAN, Classic Bluetooth, IEEE 802.15.4/ZigBee, and Wireless HART all provide specific characteristics and are therefore suitable for different applications and specific demands. However, none of these technologies offer an optimal solution for a wireless connection for sensors and actuators in manufacturing automation. In these types of applications, the existing technologies are too expensive, too slow, or consume too much energy. The solution lacks a fast, robust, low energy transmission for wireless sensors and actuators. This is where Bluetooth low energy technology comes into play.
Parameter
Table 1: A comparison of Bluetooth low energy wireless technology and other wireless technologies used in the manufacturing industry.

The answer to that question is that the technology is new in some aspects, but not in others. For instance, Bluetooth low energy technology is new in having an efficient discovery and connection setup, very short packets, asymmetrical design for small peripheral devices, and a client- server architecture. But there are also other aspects that are already well established through Classic Bluetooth, such as the Bluetooth radio, HCl logic and physical transport layers, and L2CAP packets.

These high volumes and the possibility of integration in mobile phones and laptops allow for low-cost and long-term availability of the radio components.

In order to be backwards compatible with Classic Bluetooth and to be able to offer an affordable solution for very inexpensive devices, the chipset is available in the following two versions (Figure 1):

Figure 2: In the 2.4 GHz band, Bluetooth low energy technology uses 40 channels instead of the 79 channels used in Classic Bluetooth.

Three channels, which are located exactly between the Wireless LAN channels, are used for device discovery and connection setup.

Bluetooth, Wireless LAN, IEEE 802.15.4/ZigBee, Wireless HART, and many proprietary radios use the unlicensed 2.4 GHz ISM (Industrial Scientific Medical) band. Therefore, in order to get a robust and reliable communication, it is essential for many wireless technologies to make a time consuming and accurate frequency planning. However, Bluetooth technology has already solved these issues thanks to its built-in adaptive frequency hopping feature and high tolerance for interference.

These features also make Bluetooth low energy technology coexist smoothly with other wireless technologies in the 2.4 GHz band as Bluetooth technology does not use frequencies that are occupied by other radios in the neighborhood. In addition, there is also a possibility to apply the principle of not using designated channels via the so-called channel blacklisting (Figure 3).

Ease of use and integration

The technology uses a simple star topology, which simplifies the implementation work significantly. This topology fits very well with common used system architecture with a number of smaller devices connected to a master in a production island. In most cases, an Infrastructure/Ethernet network is available and there is no need for mesh networks to extend the geographical coverage.

A unit is always either a master or a slave, but never both. The master communicates with the slaves and it can also communicate simultaneously with multiple slaves. Further, the master controls the timing pattern for the links and the slaves only passes on requests made by the master. A new feature introduced with Bluetooth low energy technology is the advertising function. A unit announces itself by periodically advertising itself. An advertisement can also, for example, include a process value or an event that has occurred (Figure 4). 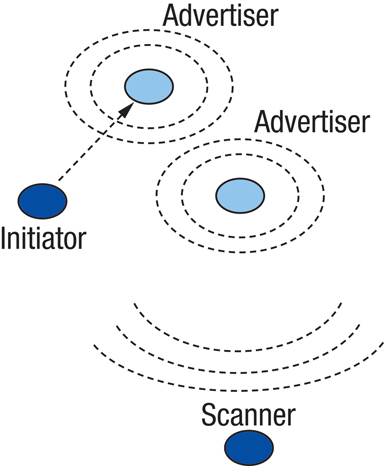 Figure 4: An advertiser periodically sends and will always act as a slave when it is connecting. A scanner is waiting for an advertisement and is always a master when connecting.

In Bluetooth low energy technology, the state, and attributes are key terms. All parameters have a condition available that is provided by the server in a protocol attribute for the client. All attributes have a certain characteristic — signal value, presentation format, etc. — which is described in the client configuration. 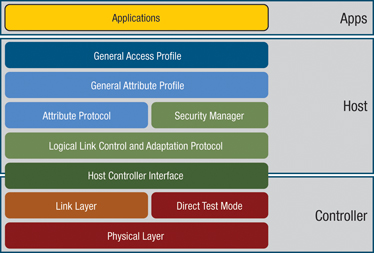 Bluetooth low energy technology only uses three channels to build connections and to discover other devices; this not only allows for lower power consumption, but also for a faster connection in only a few ms.

With Bluetooth low energy technology, the latency periods are dependent on how often the master sends messages to the slaves and how often it receives data from the slaves. The latency period for one slave only is 7.5 ms and then increases slowly for each additional slave. For example, with a connection interval of four seconds, a master can address one slave every five ms and thereby achieve updates from hundreds of slaves in only four seconds.

Thanks to a modified modulation, Bluetooth low energy has an approximately 3 dB better link budget compared to Classic Bluetooth. A Bluetooth low energy unit can thereby offer a range of 200-300 meters in line of site without the need of an additional power amplifier. Although industrial sensors and actuators often only need a range of only 20-50 meters, it is important in the aspects of robustness and reliability to have a large reserve in order to bridge temporary obstacles and interference.

Based on Bluetooth low energy properties, the technology is very well suited for applications where transferring signal status is important. The examples below show how the I/Os in industrial automation can be used (Figures 6-8).

Figure 6: A portable operator control and monitoring unit (for example, an iPhone) can read and write states of the I/O server.

Figure 7: Both units function as generic I/O clients and are used as generic servers and "indications" to reflect the digital and analog states on the other side. 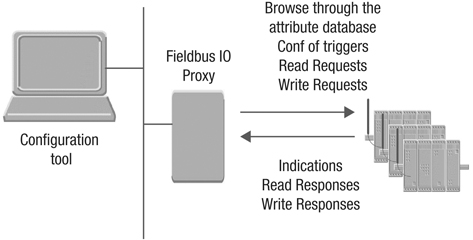 Figure 8: The I/O unit is a generic I/O server and the fieldbus I/O proxy is a generic I/O client. The I/O device is seen as a field bus I/O from the view of the fieldbus configuration PC. The field bus I/O proxy searches the I/O device attributes database to find out about which digital and analog in and outputs that are available for the I/O-unit.

Another interesting application where the very fast and secure connection is needed is the use of Bluetooth Low Energy as a key in order to allow a mobile operator’s panel to get access to the automation cell or machine.

This feature can also be used in combination with the proximity function. This function is based on the SSI (signal strength indication) value and can give a message if the user is within the production cell or not in order to allow interaction or not.

Figure 9: Automation I/O and proximity are used to control the operator’s access to the manufacturing cell.