The wireless technology will be used in more kinds of electronics equipment over the next few years. 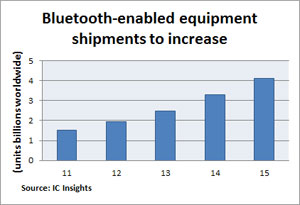 The number of shipments for electronics systems utilizing Bluetooth technology will rise to 4.2 billion units in 2015.Bluetooth wireless technology will move into a broader range of applications, including healthcare, smart energy, and automotive, among others.

These new applications will be enabled by the Bluetooth low-energy (BLE) standard and will fuel increased growth for Bluetooth modules, according to researcher IC Insights. United shipments of Bluetooth-enabled equipment will rise from 1.96 billion in 2012 to 4.2 billion in 2015.

About half of all cell phone calls originate from cars, and many countries are banning the handheld use of cell phones while driving. Hands-free calling in automobiles, which will be enabled by Bluetooth, is expected to become quite common, IC Insights reported. Another application for Bluetooth in automobiles is wireless streaming of stereo audio signals from a portable music player or cellphone to a car’s sound system.

In healthcare applications, interfaces have been established for wirelessly connected thermometers, heart-rate monitors, weight scales, blood glucose meters, and pedometers. New Bluetooth 4.0 BLE links can enable wearable low-energy sensor devices to transmit readings to a patient’s smartphone, which then can send the data to doctors and caregivers. Previously, many of these kinds of devices could not connect to Bluetooth because they required too much power.