A review of Ultra-Low-Power Bluetooth capabilities along with products from Texas Instruments and Panasonic.


There’s hardly a cell phone on the planet that doesn’t have a Bluetooth® transceiver for connecting to a wireless headset. Most new PCs now incorporate Bluetooth chips for the same purpose, letting you type while you talk or listen. Many, if not most new cars, have Bluetooth to let you talk hands free while driving. However, while that’s all well and good, there is a wide range of applications for which Bluetooth isn’t appropriate – or at least it wasn’t until now.

Bluetooth is a connection-oriented protocol designed to handle continuous streaming of data at relatively high speeds, making it well-suited to connecting wireless headsets to cell phones. While attempting to remain low power, most changes to the Bluetooth specification have concentrated on boosting the data rate. The basic rate (BR) enables synchronous and asynchronous connections at up to 720 kbps. Bluetooth Version 2.0 (2004) added an extended data rate (EDR) of 3 Mbps (in practice more like 2.1 Mbps). Bluetooth 3.0 (2009) added a high-speed (HS) data capability of up to 24 Mbps by using an alternative MAC/PHY (AMP) that communicates over a co-located 802.11 link. Despite some clever engineering, the quest for higher speed necessarily resulted in higher power consumption.

Bluetooth Low Energy, in contrast, was designed from the beginning to be an ultra-low-power (ULP) protocol to service short range wireless devices that may need to run for months or even years on a single coin cell battery. Introduced in Bluetooth Version 4.0 (2010), Bluetooth Low Energy uses a simple stack that enables asynchronous communication with low-power devices, such as wireless sensors that send low volumes of data at infrequent intervals. Connections can be established quickly and released as soon as the data exchange is complete, minimizing PA on time and thus power consumption.

It pays to advertise

In the FDMA scheme, LE radios hop between 40 physical channels separated by 2 MHz, three of which are used as advertising channels and 37 for data channels. In the TDMA scheme, one device transmits a packet at a predetermined time and the scanning device responds with another packet after a predetermined interval. Data is transmitted between Bluetooth Low Energy devices during two time units known as events: advertising events (see Figure 1) and connection events (see Figure 2).


When a connection is requested, these same advertising channels serve to connect the devices, which then proceed to use the data channels for communication. In making the connection, the initiating device defines the channel and the timing of the data interchange, having assessed the latency of communications with the advertising or slave device, which can subsequently request a change in these parameters in order to optimize power consumption.


Once a connection is established, the scanner becomes a master device and the advertiser the slave. Frequency hopping is initiated, with data packets being exchanged during so-called connection events on each frequency. The master initiates each connection event, though either the master or the slave can terminate communications at any time.

One of the ways Bluetooth Low Energy manages to minimize power consumption is to switch the radio on for only very brief periods of time. Bluetooth Low Energy radios only need to scan three advertising channels to search for other devices – which they can do in 0.6 to 1.2 ms – while Classic Bluetooth radios must constantly scan 32 channels, which require 22.5 ms each time. This trick alone enables low-energy devices to consume 10 to 20 times less power than Classic Bluetooth ones.

With a data bandwidth of 1 Mbps, a Bluetooth Low Energy transceiver will be on for one-eighth of the time that a ZigBee® node – operating on the same 2.4 GHz band – requires to transmit the same data, resulting in an eight times saving in battery life due to data speed alone.

Bluetooth Low Energy devices can scan for other devices, connect, send data, confirm valid reception, and terminate the link in 3 ms. Classic Bluetooth devices typically require hundreds of milliseconds to accomplish the same series of tasks, requiring a couple of orders of magnitude more energy in the process.

Bluetooth Low Energy packets are also much shorter than those used by Classic Bluetooth, resulting in less on time for the PA and thus longer battery life.

A single-mode Bluetooth Low Energy transceiver, surprisingly, when running flat out isn’t much lower power than a Classic Bluetooth one (20 mA versus 30 mA). The energy savings is enabled largely by the stack architecture, which enables a range of battery-saving techniques.

The Bluetooth Low Energy protocol stack (see Figure 3) consists of a controller and a host. The various parts of the stack consist of: 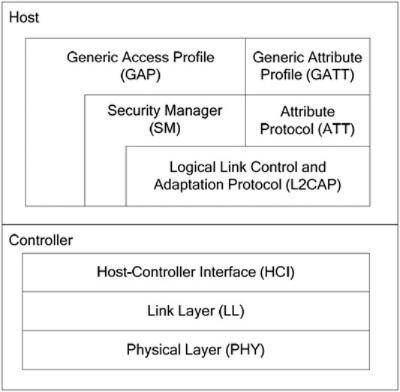 
Bluetooth applications and devices communicate with each other through a highly structured set of procedures called profiles. Profiles can be quite low level – such as profiles for connecting to IrDA devices or setting up secure links – or they can be grouped together to serve high level applications. For example, there are Bluetooth Low Energy protocols to monitor a patient’s blood pressure (BLS), heart rate (HRS), and temperature (HTP); together they form a group of healthcare profiles. The Bluetooth SIG is in the process of defining profiles for consumer, healthcare, and industrial applications, where it predicts rapid proliferation of Bluetooth Low Energy devices.

As of late 2011, Bluetooth Low Energy chips are only now starting to appear on the market. Texas Instruments is one of the first to market with its CC2540 Bluetooth System-on-Chip. The CC2540 is a single-mode chip that integrates an 8051 MCU, 8 KB of RAM, 128-256 KB of flash, and RF transceiver, a single-mode protocol stack, embedded profile software, and a full range of peripherals. The CC2540 can operate in either master or slave mode and consumes as little as 15.8 mA at 3V in receive mode and 18.6 mA in transmit (-6 dBm).

For developers TI offers the CC2540DK-MINI development kit for the CC2540. The kit contains a CC2540 USB dongle, a CC2540 keyfob board and plastic case, a CC debugger with cables, a mini USB cable, a CR2032 battery, and kit documentation. Using the supplied BTool application program and the Simple Keys GATT profile you can form a connection between the dongle and the keyfob and then experiment with different security and other low-level features. TI supplies sample source code for a blood pressure sensor, heart rate sensor, and health thermometer that you can compile; download to the CC2540 using SmartRF Flash Programmer and the CC debugger; and then run it on the dongle.


Also based on the CC2540, BlueRadios, Inc. offers the BR-EVAL-LE4.0-S2A evaluation kit. The kit provides a ready-to-use BLE device with simple AT modem-like commands and embedded Bluetooth stack and profiles (GAP, GATT, ATT, SMP, L2CAP, and BATT). This device can be configured, commanded, and controlled through simple ASCII strings over the RF Link or through the hardware serial connection via UART, SPI or USB. 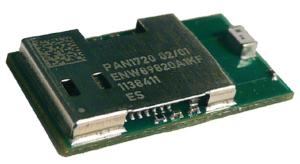 
CSR has a number of Bluetooth Low Energy chips in production, including the CSR1000A04-IQQM-R. The CSR µEnergy™ platform provides everything required to create a Bluetooth low energy product with RF, baseband, microcontroller, qualified Bluetooth v4.0 stack, and customer application running on a single chip. The CSR µEnergy platform is available in two chip variants. The CSR1001 chip is optimized for keyboards and remote controls with dedicated hardware for keypad scanning. The CSR1000 offers a smaller package for fitness products, watches, mice and other sensors.

Is that all there is?

The short-range wireless market is both crowded and fragmented, since there is no “one size fits all” solution to the wide range of requirements out there. Most of these protocols are built on top of the IEEE 802.15.4 standard, which only defines the PHY and MAC layers; each protocol then goes on to define the network layer differently according to their needs. ZigBee is probably the most widely used 802.15.4 variant, but 6LoWPAN and WirelessHART™ also have their place, as do proprietary protocols such as ANT™, Z-Wave®, MiWi™, and SimpliciTI™. Where – and how well – does Bluetooth Low Energy fit in?

Each of the other standardized protocols just mentioned have found a niche where they make the most sense: 6LoWPAN supplying Internet connectivity and WirelessHART for self-healing mesh networks; these aren’t target markets for Bluetooth Low Energy. On the other hand, ZigBee’s RF4CE™ protocol targets many of the same applications as Bluetooth Low Energy, but being a more complex protocol, it’s better at networking on the one hand – Bluetooth Low Energy can only operate in a star configuration – but being considerably higher power, it’s not nearly as well-suited to ultra-low-power applications such as medical sensors and industrial and military applications that require as much battery longevity as possible.

In the consumer space, ANT is widely used in heart rate monitors for joggers and some other body area network (BAN) applications. Like Bluetooth Low Energy, ANT is also an ultra-low energy protocol targeting low data rate applications. ANT would be a serious competitor, but Bluetooth Low Energy has one huge advantage – compatibility with over two billion installed devices and a high level of acceptance in the consumer community. The fact that the major ANT chip vendors – Texas Instruments and Nordic Semiconductor – are so strongly backing Bluetooth Low Energy should remove any doubt that it will soon replace ANT and proprietary solutions to become the dominant protocol found in ultra-low-power wireless devices.