A look at the newest and most comprehensive solutions for Bluetooth 4.0 making it easier and faster to get to market.


After any new standard is approved or a major change is made to an existing collaborative specification, it takes time for the industry to adapt. This is particularly true if the standard has gained widespread acceptance and is entrenched in the marketplace. Nothing is more ingrained in wireless consumer and industrial products than Bluetooth. Since its debut in 1998, Bluetooth has matured into one of the world’s most influential technologies as the standard for wireless communications in portable devices.

However, while the legacy Bluetooth protocols have proven themselves useful and have dominated the Personal Area Network (PAN) space for tasks such as streaming audio at moderate data rates, the latest iteration, Bluetooth 4.0, has changed the game entirely. This was done by including "Classic Bluetooth" along with both “Bluetooth High Speed”, hopping on Wi-Fi to achieve the higher rates, and “Bluetooth Low Energy (LE)”, which allows it to be energy miserly over a range of up to 160 feet (50 meters).

Bluetooth Low Energy technology operates in the same spectrum range (the 2.400 GHz-2.4835 GHz ISM band) as Classic Bluetooth technology, but uses a different set of channels. Instead of Bluetooth’s traditional seventy-nine 1 MHz-wide channels, LE has forty 2 MHz-wide channels. The bit rate is 1 Mbit/s, and the maximum transmit power is 10 mW.

While the Bluetooth 4.0 specification has been out for several years, it has taken that long for parts, stacks, and modules to arrive from competitive sources. Beyond that, and as is often the case with new standards, early offerings were fraught with misinterpretations of the specification (even from companies represented on the standards committee). First-pass silicon was early on the learning curve, and even companies with a lot of RF expertise found several passes were needed to get it right.

Recently, however, several key chip suppliers have implemented Bluetooth 4.0 in new, fully-operative silicon parts, making it more accessible to designers of low-power wireless end products. Industrial users, too, are embracing the low-energy side of the Bluetooth 4.0 specification. The well understood Bluetooth client server topology creates a stable infrastructure in which to operate. Both masters and slaves can advertise, which allows star topologies with masters having multiple link layer connections (while slaves can only have one link layer connection at any one time). As a result, Bluetooth technology is gaining traction in applications such as industrial automation, providing an alternative wireless data communications capability. (For more information see the TechZone article “Using Bluetooth for Data Communications in Industrial Automation”.)

This article looks at some of the newest and most comprehensive solutions for Bluetooth 4.0 including low-energy-only mode devices and modules, high-speed modes, and those also accepting legacy modes. It examines technology offerings that provide canned cut-and-paste support, making it easier and faster to get to market with your new Bluetooth 4.0 hardware. All devices, datasheets, tutorials, reference designs, and development systems referenced here can be found online on Hotenda’s website.

The state of things

With Bluetooth LE, everything has a “state”. All BT LE devices expose their states and serve data. A client can act depending on the states (Figure 1). For example, a temperature sensor can serve up data or receive commands to program alarm limits. In addition, serving devices can inform remote devices when changes occur, saving energy, time, and bandwidth compared to alternative polling techniques. The more efficient discovery and shorter packets (1-byte preamble, 4-byte address, 2 to 39-byte payload, and 3-byte CRC) help assure faster responsiveness. 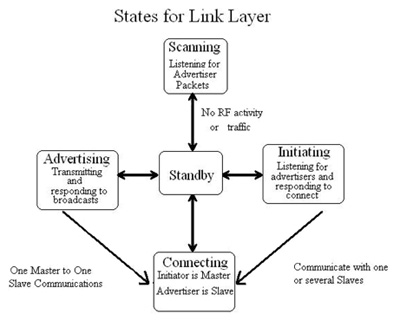 Figure 1: Compared to many other wireless protocols, the Master/Slave Advertiser/Initiator structure of Bluetooth Low Energy is easy to understand and implement, especially given its small packets with low overhead.

Since Bluetooth shares the 2.4 GHz ISM band with ZigBee, Wi-Fi, microwave ovens and cordless phones (to name a few), the use of frequency-hopping spread spectrum helps allow interoperability with these other protocols, as well as with other Bluetooth LE devices in close proximity. Bluetooth LE data channels also have upper and lower guard bands and AGC training features also allow host controllers to throttle back transmit power when strong signals are in close proximity.

The primary concern for most designers is which of the available modes to implement and for which applications. If you want to make a handheld display and control unit for your equipment, you are unlikely to be able to make it for less than the cost of a smartphone or tablet that already has that functionality built in; smartphone manufacturers and mobile operating systems supporting Bluetooth Low Energy include iOS, Android, Windows Phone, and BlackBerry. The Bluetooth SIG predicts more than 90 percent of Bluetooth-enabled smartphones will support the low-energy standard by 2018.

On the other hand, the more specialized (and/or smaller), low-power sensors, actuators, and functional nodes are still anyone’s game. Here is where off-the-shelf chips and modules can let designers get product to market without breaking the bank or the calendar. Let’s look at some of these parts.

Both dual and low-energy-only support is at the ready in module and chip form. Parts such as the CSR CSR8645A04-IBBC-R are dual-mode 4.0 transceivers with an emphasis on improved audio quality as well as 4.0 wireless enhancements. Described by the company as a “stereo audio ROM,” it contains DSP enhancements for multiband EQ and boost, as well as an ADC and DAC, UART, USB, and Smart App connectivity.

As a member of CSR’s Bluecore technology, this part builds on the experience gained from several generations of Bluetooth devices, with full automotive temperature ranges and sensitivities down to –92 dBm and up to 10 dBm output power.

CSR also claims to be the world’s first Bluetooth Low Energy IC ready for the automotive market, integrating the SIRF primaAuto multifunction location platform with its CSR8311 wideband speech IC. This part achieves a 3 Mbit/s data rate using a standard 3.1 to 3.6 V power supply in a small 5 x 5 mm 40-pin package. It focuses on wideband speech with DSP-capable filtrations for the noisy automotive environment and can connect with vehicle processors via USB or UART.

An even more highly-integrated version, the CSR8670 BlueCore5-Multimedia Audio System-On-Chip(SoC), combines Bluetooth 4.0 functionality with a touchscreen interface for capacitive touch sensors and low-power-mode functionality. CSR also combines Bluetooth 4.0 with Wi-Fi (IEEE 802.11) in its CSR8811, which is suitable for use in cell phones, but is also accessible to engineers without having to commit to buying millions of parts a year.

For the world of distributed wireless low-energy sensors, the company’s CSR1000A04-IQQM-R Bluetooth Low Energy-only transceiver is one to be aware of. This part, in either 32- or 56-pin packages, has impressive +8 dBm Tx power output levels, as well as a sensitive –92 dBm input sensitivity and is optimized for very-low-power operations. The strategic use of hardware is the reason it uses less power than a comparable software-based approach (Figure 2). A “qualified” Bluetooth 4.0 stack is also available that allows your design to run on the same processor without the need for a dual core.

Figure 2: While peak power draw is comparable, strategic use of hardware minimizes the power draw duration resulting in lower overall energy use.

Texas Instruments may be a big company, but it is also a leader in RF technology and is surprisingly nimble when it comes to introducing well-engineered new technologies in a rapid time frame.

TI provides a highly-integrated solution for Bluetooth Low Energy with the C2540F128RHAR SoC (Figure 3). It is a single-chip Bluetooth LE solution with an included protocol stack and provides a reference design for its very small 6 x 6 mm 40-pin package. TI also has a Bluetooth Training Module and an instructional video on Bluetooth LE available on Hotenda's website 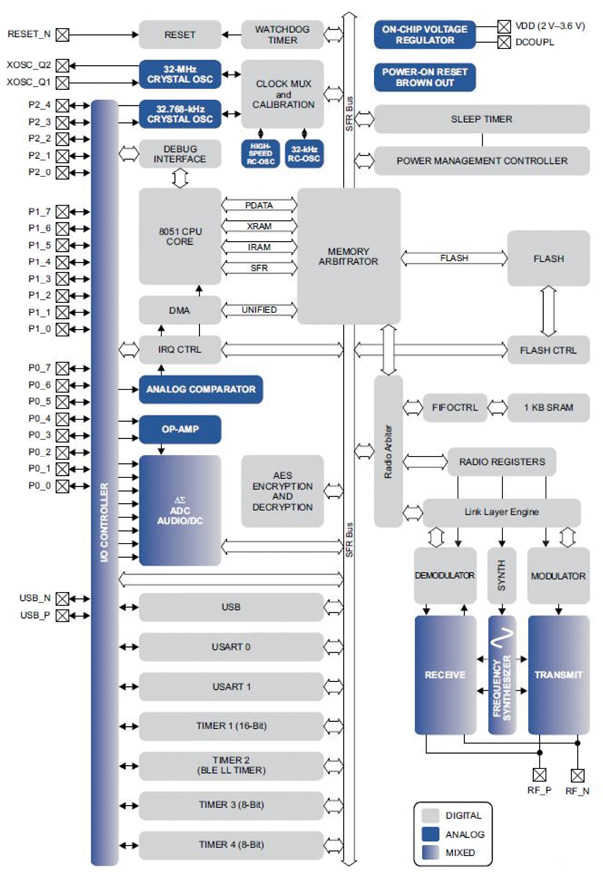 Figure 3: The single-chip Bluetooth Low Energy solution from TI contains an embedded 8051 core processor and a rich set of peripherals and resources including power management and USB.

Modules are often a good way to refine and examine design concepts and feasibility ideas, as well as offer a fast and low-risk path to market. Panasonic provides fully-functional modules for Bluetooth 4.0 including the ENW-89820A1KF, part of its PAN1720 series. These general-purpose, fully-functional modules yield 1 Mbit/s data rates and are surface mountable. This way they can be used for development and test, as well as OEMed as part of a system or end product.

Another modular solution comes from BlueGiga Technologies with its BLE112-A-V1 Bluetooth 4.0 module (Figure 4). Targeting low-energy designs such as sensors and accessories, this part includes a stack and user application space for customized applications. With a fast wakeup (a few hundred microseconds), it draws only 400 nA in sleep mode. Like most modules, it comes pre-certified and compliant with world standards. 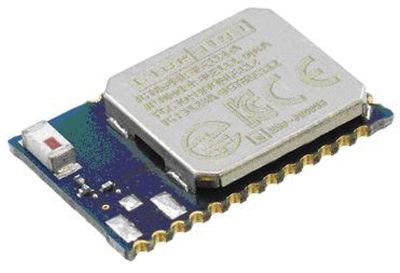 Figure 4: This surface-mountable postage-stamp-sized module houses all the Bluetooth 4.0 functionality and comes with all the certifications to provide the fastest path from concept to product.

Bluetooth has come a long way from simply connecting smartphones to Bluetooth headsets; it now means different things to different people. For designers it can represent comprehensive support of a legacy protocol, but with its high-speed and low-energy modes, Bluetooth now also presents more choices for new designs and it requires more complex hardware and software.

What’s next? The Bluetooth Special Interest Group (SIG) just announced version 4.1, which will be aimed at making Bluetooth a major player in the much-hyped “Internet of Things” (IoT) market, leveraging Bluetooth's broad name recognition, widespread acceptance, and its v.4.0 low-power capabilities to compete with ZigBee, near-field communication (NFC), and other wireless technologies that also want a big piece of the IoT.