Learn about the sensing devices that make it possible to diagnose what went wrong in the event of a plane crash.


Understanding why a plane crash occurs is critical to ensuring the future safety of air travel as well as unearthing any potential flaws in aircraft design, manufacturing processes, materials, and more. Whenever such an event occurs, the first order of business, after taking care of human recovery, is to locate the flight-data recorder (FDR) and cockpit-voice recorder (CVR), that provide an in-depth snapshot of the flight’s last moments—a last glimpse into what happened and why. The data collected in the FDR system can help investigators determine whether an accident was caused by pilot error, by an external event (such as wind shear), or by an airplane-system problem. Over the years, these data have contributed to airplane-system design improvements and the ability to predict potential difficulties as airplanes age.

Used first in the 1950s, today the FAA mandates that all commercial passenger planes be outfitted with this recording equipment—the so-called “black box” (which is actually bright orange for better visibility, see Figure 1). The two recorders are required by international regulation to be capable of surviving the conditions likely to be encountered in a severe aircraft accident; they are designed to withstand high-speed impact and intense heat. FDRs utilize sensors mounted throughout the aircraft structure, picking up data from components and systems that tell the story of how they were configured and being used before and at the time of an accident. There are sensors that detect acceleration, airspeed, altitude, engine performance, cabin temperature and pressure, flap settings, and more. Data acquisition computers centralize and format data coming from these sensors, as well as from onboard computers and other instruments and then transfer it to FDRs via a dedicated digital link.

The FDR is the epitome of ruggedized equipment. They operate between -55°C and +70°C, and can survive extended exposure to 1,110°C fire, 260°C heat for 10 hours, as well as pressurized saltwater and jet fuel. Standards call for a shock force to 3,400 gs for a duration of 6.5 milliseconds, as well as withstanding a static-crushing force at all axis points of an applied-load force of 5,000 lbs. for five minutes on each axis, and more. They are nearly indestructible. The trick, however, is to find them, especially when a crash takes place at sea.

Typically, a crash recorder is located in the back of the aircraft, while in the cockpit the voice recorder, complete with typically four microphones, tracks conversation and ambient noise. Completing the recording/crash system is an underwater- locator beacon with a submergence sensor, which emits a pulse detectable by sonar and acoustical-locating equipment. When water touches the sensor, the beacon activates, sending pulses at 37.5 kilohertz (kHz) through water to a depth of 14,000 feet. 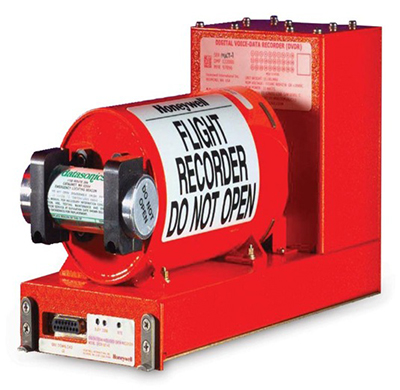 As noted, the FDR collects and records data from a variety of sensors, such as accelerometers. For example, Measurement Specialties has a Model 834M1 Accelerometer with a ±2000 g to ±6000 g dynamic range, and can be used in impact testing and instrumentation. The low-cost, board-mountable tri-axial accelerometer is designed for high-amplitude embedded-shock applications and features a maximum-current consumption of 22 µA and incorporates full power and signal conditioning. The model 834M1 is available in ±2000 g to ±6000 g ranges and provides a flat-frequency response up to greater than 6 kHz. It also features the wide-operating range of -40° to +125°C necessary in harsh environments. The standard model 834 offers the same envelope with a lower-maximum-current consumption of 4 µA.

For engineers developing sensors for black-box applications, Analog Devices’ ADIS16240PCBZ (Figure 2) low-power, programmable impact sensor and recorder evaluation/interface board is available for the supplier’s16240 iMEMS technology digital-shock detection and recorder system, which enables shock measurement in all directions. This sensing system collects data autonomously and makes it available to any processor system that supports a 4-wire serial peripheral interface (SPI). The 2 mm pitch connectors easily interface with 1 mm ribbon cable or can be soldered. The board also features a simple connector translation that enables the user to bypass BGA soldering. 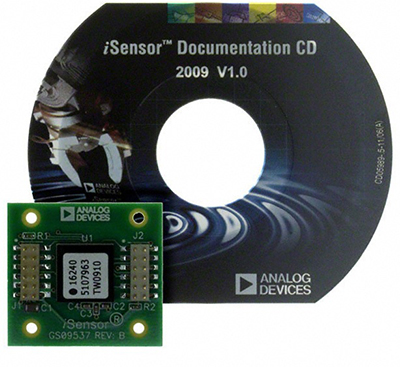 For those who prefer to use a PC interface, the company’s ADISUSBZ is available and provides a USB interface with a simple graphical user interface (GUI) package to evaluate sensor functions and performance. The system supports a 150-200SPS sample rate. Analog Devices points out that since the USB ports are serviced by their PC’s interrupt structure, sampling in this system, while not perfectly coherent, is sufficient for most datasheet parametric verification, including in-run bias stability. It is not, however, a full development kit containing development tools, source code, and software.

In addition to aircraft crash recorders, the market for an automotive counterpart is on a rapid upswing. Crash analysis involving automobiles has typically relied on such physical data as skid marks, tire prints, roadway gouging, vehicle damage, and the imperfect eyewitness recollection of humans. Now, there are black boxes that are finally becoming more intelligent, allowing for data download and analysis.

General Motors began installing sensing diagnostic modules (SDMs) in cars in 1990. Ford followed in 1997. The SDM detects accelerations and makes split-second decisions for deployment of airbags. It tracks acceleration in discrete time packets every 10 msec, and determines whether an airbag deployment is necessary.

In addition to airbag management, the SDM tracks data on braking, engine speed, vehicle speed, percent throttle, seat-belt use, and records crash data. This can be retrieved from the event-data recorder (EDR), which is part of the SDM. As police and insurance agencies continue to demand their use, the devices will evolve to feature greater storage capacity and bandwidth, as well as accuracy in low-speed events to match that of high-speed crashes.

One such device used in automotive-crash detection is the Analog Devices single-axis, high-g, ADXL78 series of iMEMS accelerometers (e.g., the AD22279-A-R2). It is a low-power, complete single-axis accelerometer with signal-conditioned voltage outputs on a single-monolithic IC. The device (Figure 3) measures acceleration with a full-scale range of ±35 g, ±50 g, or ±70 g (minimum) and measures dynamic acceleration (vibration) and static acceleration (gravity). 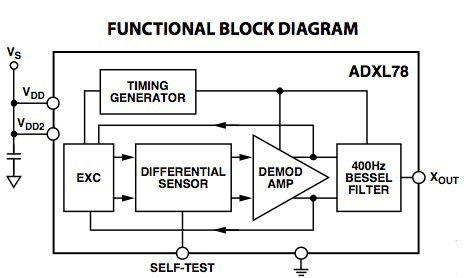 Figure 3: A block diagram of the ADXL78 used in automotive-black-box applications.

The device is designed and qualified for use in front- and side-impact airbag applications, vibration monitoring and control, vehicle-collision sensing, and shock detection. Temperature stable and accurate over a rugged automotive temperature range, it features high resistance to EMI/RFI, performs a complete mechanical and electrical self-test on digital command, and has low-noise and low-power consumption (1.3 mA).

Technology advances continue to be applied to both flight- and automotive-crash recorders. For flight applications, these changes may involve cockpit-video recording facilities and black boxes that eject upon impact so that they can be found easier. As a result of the search for flight MH370, a bill was re-introduced that would make ejectable black boxes mandatory so that they would be able to be found on the surface of the water rather than be buried on the ocean floor still a part of the plane.

Given the number and severity of auto accidents and the trend towards taking the driving out of the hands of the individual, it makes sense that logging more data as to the conditions, environment, and events will make even greater sense, and continued sensor-product development can be expected here, too.