Explore key difference between reliability and failure, and see how CUI is improving reliability via design, component selection, and manufacturing processes.


Although at first glance power supplies may not be as glamorous as microprocessors or DSPs, they are a necessary part of an electronic system because any supply failure can bring that system to a halt. Its poor performance can compromise the quality of a given product. As a result, both outright supply failure and poor performance are of great concern to system designers. In other words, the reliability of a power supply in any system is absolutely critical.

To select or build a reliable power supply requires a full understanding of factors and stresses impacting the reliability of the product. This article will explore the meaning of reliability and the key difference between reliability and failure rate, as put forth in a white paper by CUI titled “Reliability Considerations for Power Supplies.”¹ It will also discuss how a manufacturer like CUI is improving reliability through design, component selection, and manufacturing process. A few examples will demonstrate how the supplier is incorporating and specifying these practices in AC/DC and DC/DC converter modules manufactured by the company.

Before investigating the process involved in boosting the reliability of a power supply, it is important to first understand its definition and the difference between reliability and the failure rate. Per CUI’s white paper, reliability is the probability that the supply, operating under specified conditions, works properly for a given period of time. Failure rate is the percentage of units that fail in a given unit of time. As shown in Figure 1, it follows a “bathtub” curve and has been classified into three key phases by engineers, which include infant mortality, useful life, and wear-out. While infant mortality is the result of poor workmanship and inferior quality components, the second phase, which is useful life, keeps failure rate low and constant to keep the supply in proper operation for a longer time. In the wear-out phase, which is third and final, the supply fails when its components reach the end of their operating life. 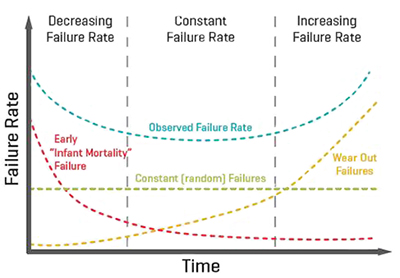 Figure 1: As shown, failure rate is classified in to three key phases: infant mortality, useful life and wear out (Courtesy of CUI).

Although, predicting with certainty how long a specific converter will operate within desired specs or after how many hours it will fail is debatable, CUI recommends using probability techniques to determine a supply’s expected lifetime or failure. According to the white paper, a supply’s reliability depends on many factors. Key among them is a sound design with sufficient margins, quality of components, thermal considerations, burn-in, and manufacturing process. The company uses the following formula to calculate reliability of a component:

where λ is the failure rate. When this formula is extended to a system, it becomes

where λA is the sum total of all components failure rates:

In essence, selection of components is crucial to the overall reliability of the supply. Hence, it is recommended that inherently reliable components must be used to significantly reduce the risk of failure. For instance, as per CUI’s experience, capacitors are common failure points in power supplies, so using longer-life capacitors helps improve the reliability of the product. However, it does add to the overall cost as quality components cost more. Likewise, magnetic components (transformers and inductors) require extra attention as well.

Another factor that can boost reliability is using components at levels below their rated specification. For example, a component rated for reliable operation at 85°C will have a significantly improved performance when used at 55°C. Typically, a component’s life doubles for every 10°C decrease in temperature (Figure 2). 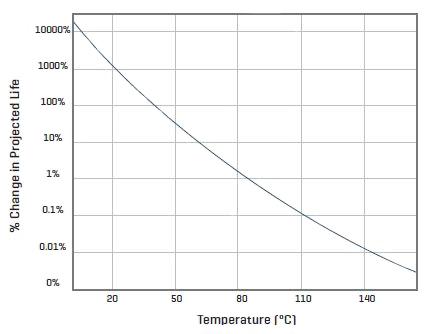 Figure 2: The effect of temperature on a component’s projected life (Courtesy of CUI).

Additionally, CUI suggests three methods to determine the failure rate. These include prediction, assessment, and observation. Each method is discussed in more detail in the referenced white paper. Prediction taps one of the following standard databases of component failure rate and expected life. These are MIL-HDBK-217 (U.S. Navy), HRD5 (British Telecom), and Telcordia (previously Bellcore). Since MIL-HDBK-217 is focused on military and commercial applications, and yields MTBF data, CUI prefers to use it for calculating the MTBF for its AC/DC and DC/DC converter modules.

Interestingly, power supply manufacturers prefer to provide the inverse of the failure rate, which is the mean time between failures (MTBF) and mean time to failure (MTTF). Consequently, MTBF and MTTF are basically the same measure, as they are both the inverse of the failure rate, according to Jeff Schnabel, CUI’s vice president of global marketing. However, adds Schnabel, “MTBF is commonly used for equipment that will be repaired and then returned to service.” “Despite the commonplace assumption,” Schnabel continues, “it does not guarantee a minimum time between failures, only a mean.” According to the CUI marketing executive, MTBF is the standard measure in the industry.

Although it is helpful to know how MTBF performs over a temperature range, power supply manufacturers prefer to specify it at 25°C temperature. According to Schnabel, “CUI typically evaluates MTBF at more than just room temperature during the design and testing process and can share that information upon request.”

A typical and/or good MTBF depends on the application, notes Schnabel. A general-purpose AC/DC wall adapter might typically be rated around 100,000+ hours, whereas a DC/DC intended for a telecom application would be in the million-plus hour range. “Part of the reason for this is that a wall adapter is easily replaced while a DC/DC converter that is soldered down on a motherboard cannot easily be replaced and it may be very expensive to do so,” asserts Schnabel. In addition, some products, such as medical equipment, demand higher MTBF due to patient health and safety rather than cost and ease of replacement, says Schnabel.

Furthermore, the paper highlights three kinds of stresses that play a crucial role in a power supply’s life: thermal, mechanical, and electrical. A good and robust design takes into account each of these stresses and incorporates proper steps to minimize both their occurrence and their impact, explains CUI. While thermal stress is the most challenging and harmful because it shows up in so many different ways, the impact of mechanical stress depends on how and where the supply will be installed and used in the end equipment. Similarly, electrical stress comes into the picture when a component is operated beyond its rated specification. For example, a capacitor may be rated for 100 VDC, but sees a 150 VDC spike in the circuit during operation, and a resistor specified to handle up to 1 A current experiences a higher-current pulse due to a circuit transient or an external ESD event. The result is premature aging and early failure in many cases.

Consequently, the white paper emphasizes a robust design that takes into account the effects of load and line transients, as well as noise. That means a good designer cautiously establishes the required minimum/maximum values of component parameters to ensure reliable operation. In addition, CUI also recommends using simulation programs like Spice to verify both static and dynamic performance of the power supply circuit using realistic models of the components and pc-boards and interconnects.

Lastly, the company highlights the role of layout in realizing a reliable supply. It recommends using short interconnects to minimize voltage drops, as well as extra-thick copper cladding or bus bars depending on the output current. Another tip for improved reliability is using large board lands for components and current and sufficient size and plating for through-holes.

Over and above solid design and proper selection of components, a high-reliability supply must utilize a good assembly and manufacturing process that does not compromise either the design or components, concludes CUI.

In summary, a reliable power supply is a combination of several factors, such as design and analysis, components, manufacturing process, burn-in test, and installation. No single step will ensure a reliable supply.