Learn more about switching regulators and other driver topologies for more demanding applications.


Solid-state lighting dominates the headlines. Yet low-power LEDs still represent the workhorses of the sector, with functions ranging from simple indicator lights to backlights for portable device displays. While such LED devices are well established, developing a marketable product requires a thorough understanding of the technology and the tradeoffs involved.

One important part of the system involves driver circuits. The tradeoffs affect the decision to use a simple resistor-power supply, a linear regulator, or the additional sophistication of a switching regulator (see Figure 1). 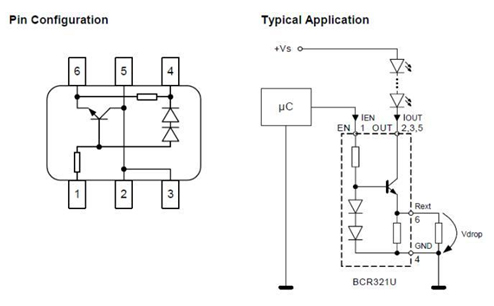 Figure 1: Used with an adjustable power supply, the BCR 320 family of linear regulators can drive 0.5-W LEDs with a power dissipation of just 1 W. (Image courtesy of Infineon).

The optimal driver circuitry choice depends on the requirements—and balancing the design complexity, efficiency, and cost.

By definition, LEDs are light emitting diodes. That is, the current into the LED must be regulated to avoid failure. One popular technique to regulate current is to design a resistor into the driver. The LED driver also controls both LED output quality and luminous flux—and extends the life of the system.

Temperature management is also vital to consistent color and lighting because output wavelength varies with temperature. Also, as with most electronics, elevated temperature reduces life expectancy. Incandescent bulbs radiate heat off of the glass bulb, but LEDs generate most of their heat off the back side of the chip, limiting cooling options to less efficient conductive cooling. As a result, designing drivers for low heat dissipation is important not just for high-efficiency applications, but also for those requiring extreme reliability.

Indicator lights tend to have very simple performance requirements: turn on, turn off. In these types of applications, LEDs function as a support technology within another product. Often cost control becomes the primary design objective, making a simple voltage source/resistor combination an appealing option.

Low-brightness LEDs, with drive currents around 100 mA or less, are also the leading choice for outdoor displays, such as channel letter lighting on the sides of buildings around the globe.

"When you look at a linear light source like a channel letter, you want to have that light distributed," said Robert Pizzuti, marketing manager, industrial lighting products at Infineon Technologies in Milpitas, Calif. "If you use high-current, high-brightness LEDs, you're going to see one real bright spot in the middle of the letter. People would rather have more lower-current sources than just a few high-current sources." For practical purposes, this means driving strings of LEDs, typically wired up in series.

This architecture presents a new challenge: maintaining consistent current levels throughout the strings, which typically run around 50 feet, with a set of LEDs every 2 to 3 feet. "Most people want to keep the LED current within plus or minus 5 percent," says Clinton Jensen, applications engineer for lighting products at National Semiconductor in Santa Clara, Calif. "You start getting out of that range and you can actually see brightness differences."

Variations in LED wavelength and output characteristics still exist, even within a single batch of LEDs, despite fabrication improvements. Manufacturers address this issue by testing and binning the devices, but it still means that driving any two LEDs the same way will not generate exactly the same output. The problem is complicated by the fact that a simple driver circuit can impart as much as 80 percent variation to the drive current.

"LED lighting is basically management of variation," Pizzuti said. "You have LED forward voltage variation that's quite significant. You have power-supply voltage variation that’s significant, you have temperature characteristics that also affect the forward voltage and potentially the power supply, and you have loading and losses that vary." Meanwhile, conductive losses act to change voltage across the length of the LED strand.

Simple circuits with resistors matched to each string of LEDs can produce the same current and same light output throughout. This approach of balancing the strings to get a consistent forward voltage takes time and effort and increases cost. Using shorter strings also help limit voltage drop to levels that will not affect light output.

Linear regulators provide a simpler alternative that is worth a modest increase in cost—five or 10 cents compared to about three for a resistor. Linear regulators provide consistent current for LEDs running on around 150 mA or less by maintaining a set voltage across the sensor resistor of the string. Another advantage is that they don't generate electromagnetic interference (EMI) or switch-mode noise.

Linear regulators are less efficient than simple circuits. A circuit designed to drive ten 3-V LEDs in a series has a total load of 30 V. To maximize efficiency, the input voltage should be as close as possible to the string voltage. Using a 32-V power supply, the system would dissipate 2 V across the regulator as heat. However, if the LEDs were closer to 2.5-V devices, then the system needs to dissipate 7 V, which not only wastes power but heats up the regulator, potentially reducing LED life.

Increasing the system efficiency may be possible. "If you can come up with a linear regulated circuit that can somehow tell the DC voltage to be less, or more, then you can get the best of both worlds," said Alex Craig, principal engineer, Fairchild Semiconductor in Melbourne, Fla. "You can be quite efficient because you're only going to dissipate the power you need and you can still have a lot of feature-rich functions."

This approach is more complex and typically requires a microprocessor, a feedback device, and an adjustable power supply. For the right applications, though, devices like the BCR 320 can provide big benefits. Targeted at 0.5-W LEDs, the chip supplies drive currents ranging from 150 mA to 200 mA while dissipating just 1 W across a broad temperature range (Figure 2). A negative thermal coefficient triggers a current drop of 0.2percent/K in the event of temperature increase. 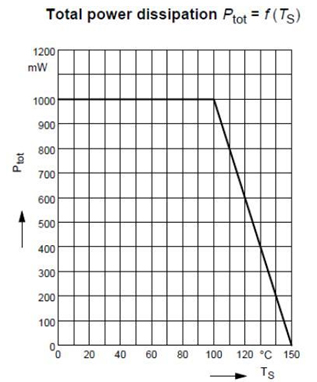 A sister device, the BCR 450, is capable of driving 1-W to 3-W devices, with a variable current adjusted by an external sense resistor (Figure 3). The BCR 450 can drive up to 85 mA and by adding an external power transistor, it can drive at currents as high as 1 A. "The old notion of linear regulators only driving up to 1 W [devices] and being really inefficient isn’t always true," says Pizzuti. "People should at least give linear drivers a look for all of their applications. It may be that they can save money and be equally efficient." 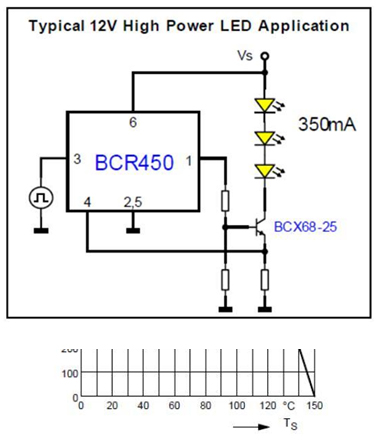 Figure 3: Designed for higher-power LEDs, the compact BCR 450 can produce drive currents as high as 1 A with the aid of an external power transistor. (Image courtesy of Infineon).

Depending on the sophistication of the device, a switching regulator might offer the best balance of performance and efficiency. A variety of switching regulators, including step down (buck) and step up (boost), provide design engineers with options. The FAN5340, a synchronous current-mode boost converter, uses a boost switching regulator to drive from two to four LEDs in series for portable-device backlighting applications (Figure 4). Able to deliver up to 500 mW, it features dimming capabilities controlled by external PWM signal. 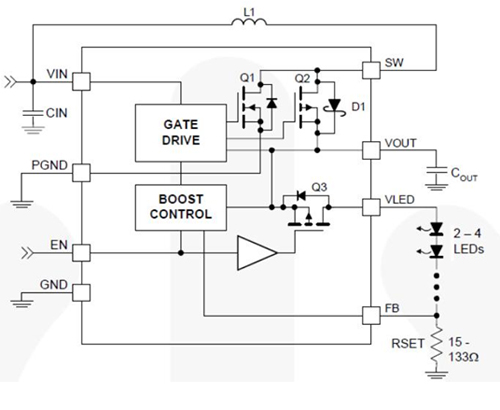 Getting the desired performance out of an LED requires a thoughtful driver design. With a range of options available, design engineers can develop simple, low-cost solutions for their low-brightness devices.

To learn more about switching regulators and other driver topologies for more demanding applications, watch for an article devoted to high-brightness LED drivers in the May issue of DigiKey’s TechZoneSM, focused on lighting.