LED lighting is a mainstream technology. LED flashlights, traffic signals, and vehicle lights are commonplace, and the push is on to replace incandescent and fluorescent lamps in mains-powered residential, commercial, and industrial applications.


LED lighting is a mainstream technology. LED flashlights, traffic signals, and vehicle lights are commonplace, and the push is on to replace incandescent and fluorescent lamps in mains-powered residential, commercial, and industrial applications. The energy savings earned by moving to energy-efficient LED lighting is simply staggering. In China alone, authorities estimate that moving one-third of the country’s lighting market to LEDs will produce a saving of at least 100 million kWh of electricity and reduce carbon dioxide emissions by 29 million tons per year. However, there is a snag – controlling the output without flicker is difficult, especially in applications such as illumination, whether domestic or urban.1

Incandescent lights are relatively easy to dim with a simple, low-cost, leading-edge TRIAC-based dimmer. A TRIAC is an electronic switch that allows small control voltages and currents to switch very high voltages, as in a lighting control system. As a result, these dimmers are everywhere. For solid-state lighting or LED-based retrofit lamps to be truly successful, they must be capable of being dimmed when used with existing controllers and wiring.

Attempts to dim LED lamps have encountered a number of problems, often resulting in flicker and other undesirable behavior. To understand why, it is necessary first to explain how TRIAC controllers work, then to consider the technology of LED lamps and finally to look at how these two interact with each other.

In a typical TRIAC controller (see Figure 1), the potentiometer R2 is used to adjust the phase angle of the TRIAC, which fires on each leading AC voltage edge when VC2 exceeds the breakover voltage of the DIAC. When the TRIAC current falls below its holding current (IH), the TRIAC turns off and must wait until C2 is recharged in the next half cycle to turn on again. The voltage applied across and the current through the lamp filament is a function of the phase angle of the dimming signal, which can vary from almost zero to 180°.

An LED lamp intended to replace a standard incandescent bulb typically contains an LED array arranged to provide an even spread of light. The LEDs are connected in a series string. The brightness of each LED is a function of the current through it, and the LEDs have a forward voltage drop which is typically approximately 3.4 V, but can vary from 2.8 V to 4.2 V. The LED string should be driven by a constant-current supply, which must be tightly controlled to ensure matching between adjacent lamps.

For an LED lamp to be dimmable, the lamp’s power supply must interpret the variable phase angle output from the TRIAC controller to monotonically adjust the constant current drive to the LEDs. The difficulty of achieving this while keeping the dimmer working correctly can result in poor performance. Problems can appear as flickering, slow startup, uneven illumination, or blinking as the light level is adjusted. There are also issues with unit-to-unit inconsistency and unwanted audible noise emanating from the lamp. These effects are generally caused by a combination of false triggering or premature shutdown of the TRIAC and inadequate control of the LED current. The root cause of false triggering is current ringing when the TRIAC fires. Figure 2 illustrates this effect. 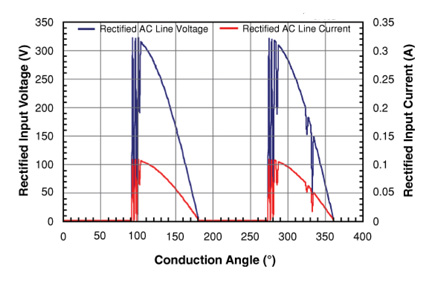 When the TRIAC fires, the AC mains voltage at that moment is applied almost instantaneously to the LC input filter of the LED lamp power supply. The voltage step applied to the inductance results in ringing. If during this ringing the current through the dimmer falls below the TRIAC trigger current, the TRIAC stops conducting. The TRIAC trigger circuit then recharges and re-fires the dimmer. Such errant multiple TRIAC restarts can cause undesirable audible noise and flickering in the LED lamp. Less complex input EMI filters help minimize this undesirable ringing. For successful dimming, it is critical also that the input EMI filter inductors and capacitors be as small as possible.

For reliable dimming down to low levels, the TRIAC must turn on monotonically and stay on almost to the point where the AC voltage falls to zero. For TRIACs, the holding current required to maintain conduction is typically in the range of 8 mA to 40 mA. For incandescent lamps, this current is easy to maintain, but with LED lamps consuming less than 10% of the power of an equivalent incandescent lamp, the current can easily fall below the TRIAC’s holding current causing the device to turn off prematurely. This can also result in flickering and/or limit the dimmable range.

A number of other issues present challenges when designing an LED lighting power supply. Energy Star2 specifications for solid-state luminaires require a minimum power factor of 0.9 for commercial and industrial applications. Tight requirements for efficiency, output current tolerance and EMI must be met, and the power supply must respond safely in the event of a short or open circuit of the LED load.

A recent technical/product development by Power Integrations (PI) presents a good example of how to address the challenges of driving LEDs, and TRIAC compatibility. Figure 3 is the schematic for a TRIAC-dimmable 14 W LED driver developed by PI.

This circuit is based on Power Integrations’ LinkSwitch-PH™ family device LNK406EG (U1). The LinkSwitch-PH family of LED driver ICs incorporates a 725 V power MOSFET and a continuous conduction mode, primary-side PWM controller in a monolithic IC. The controller implements both active power factor correction and constant current output in a single stage. The primary side control technique used by the LinkSwitch-PH family of devices provides highly accurate constant-current control eliminating the need for an optocoupler and supporting circuitry commonly used in isolated flyback power supplies implementing secondary side control circuitry, while the PFC part of the controller eliminates the electrolytic bulk capacitor.

The LinkSwitch-PH family of devices can be set to either dimming or non-dimming mode. For TRIAC phase-dimming applications, a programming resistor (R4) is used on the Reference pin and 4 MΩ (R2+R3) on the Voltage Monitor pin to provide a linear relationship between input voltage and the output current, maximizing the dimming range.

The 14 W LED design achieves the goals of compatibility with standard leading edge TRIAC AC dimmers, very wide dimming range (1000:1, 500 mA:0.5 mA), high efficiency (>85%), and high power factor (>0.9). This demonstrates that the problems associated with TRIAC dimming of LED lamps can be overcome, even to the extent of making straightforward the design of drivers for cost-effective dimmable LED lamps with consistent and reliable performance. 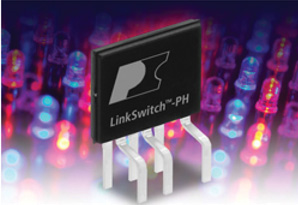 Lights which flicker unintentionally can lead to discomfort. Prolonged exposure can cause headaches, dizziness, other malaise and impaired visual performance. Visible flicker – typically that which occurs between 3 and 70 Hz – has been shown in various studies to have more adverse effect on humans than “invisible” flicker4. For lighting in areas where people remain for a significant period of time, such as offices, schools and hospitals, it is crucial to ensure that all light sources are free of visible flicker.

As well as the frequency, modulation depth is another factor that affects the perceived level of flicker. [Modulation depth is defined as (Lmax – Lmin) / (Lmax + Lmin), where L is the luminance]. The lower the modulation depth is, the lesser the effect is, according to a 1989 study by Wilkins, et al. 4, which showed that the peak-trough modulation depth known to induce headaches from fluorescent lighting at 100 Hz is about 35%.

LED lighting components are current-driven devices which on their own will not flicker, unlike traditional light sources such as metal halide-based lamps, which tend to flicker towards end of life. However, flicker can be introduced by the characteristics of the LED driver or power supply. The output of a switched mode power supply (SMPS) may contain low frequency harmonic currents and high frequency noise/ripple. Large ripples and inconsistent ripple current will result in flickering light.

For the single, active power-factor correction topology that is widely used in the SMPS, in order to maintain low harmonic distortion, the response of the power feedback loop has to be slow. However, this will also lead to light flickering, so a negative feedback circuit is needed to eliminate these signals. The stability of the SMPS depends on the closed loop gain and the phase margin of the negative feedback circuitry design.

A suitable negative feedback circuit can be formed by op-amp feedback via an optocoupler to the power factor correction circuit to control the MOSFET on-time, as shown in Figure 5 below. If the load current increases, the MOSFET on-time will adjust to achieve consistent output voltage throughout the whole operation cycle. As we have already noted, ensuring low modulation depth and higher modulation frequency helps in minimizing the perceived effect of flickering on human eyes. 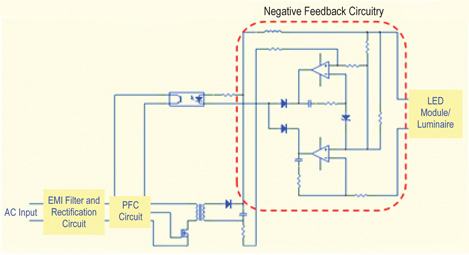 Figure 5: Current smoother - Negative feedback circuit for the SMPS, formed by op-amp feedback via an optocoupler to the power factor correction circuit to control the MOSFET on-time. (Source: Avago Technologies).

In today’s lighting market, the pressure from various sources to eliminate visible flicker is much higher than invisible flicker, due to the comfort and operational reasons mentioned above. As such, a properly designed LED luminaire with minimized flicker is a suitable solution to replace a fluorescent lamp in providing a higher quality lighting experience to consumers.

Fluorescent tubes with magnetic ballasts operate at twice the supply frequency (typically 100 Hz or 120 Hz). However, as such lamps age, the flashes that occur in one direction of current may not equal those that occur in the other direction and consequently the lamps may visibly flicker with the driver components at the frequency of the power supply.

Kee Yean Ng, Worldwide Product Marketing Manager at Avago Technologies, comments, “Our opinion is that flicker is not an issue nowadays with a well-designed luminaire. From our experience with Avago’s luminaires, we have not encountered any customers having this problem.” 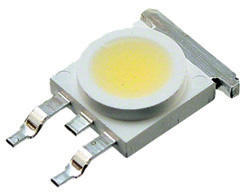 Figure 6: Avago’s Power LED source 1 W Amber, based on AlInGaP, is typical of the sort deployed in no-flicker luminaires.

David Cox, Cree’s Sales Development Manager and Partner Program Leader, based in Durham, NC, considers that many of the issues surrounding flicker and output variability have little to do with the LED design itself; rather the problem may lie in the quality of the current reaching the lamp.

“The problem that people can perceive is rooted in the current quality and power supply and how we convert energy that is delivered to the LED into light,” said Cox. A good lighting class LED, which means a lot more than just high power output, is exemplified by Cree's X-Lamp range, a full portfolio of white (and colored) LEDs that offer proven white-point stability, an L70 lifetime up to 50,000 hours, and crucially, an electrically-isolated thermal path.

This range has been specifically designed to ensure consistent outputs for illumination applications such as outdoor lighting, portable and personal lighting, indoor downlights, retail display lighting, architectural, transportation, and even emergency-vehicle lighting.

Cox cites another example of usage in which the X-Lamp is delivering flicker-free performance for a notoriously demanding customer type in Cree’s home state: “One of our customers has produced a light that is being used for illumination applications in the motion picture industry and in high-speed camera applications with no visible flicker.”

Luminaire developers need to use lighting class or higher power LEDs, which are specifically designed for lighting apps rather than any high brightness LED that is not specifically designed for illumination applications in luminaires. Providing the choice of LED is wise, as any flicker will be unconnected with the LED itself and caused only by the power source and the method of control.

“Cree’s power LEDs are designed for illumination,” according to Cox. “They are a DC-in product, but you can connect then to AC if you connect them to a power conditioner. So in effect you are conditioning the power source to create light. Another good way to reduce flicker is to work with quality LED drivers, or a non-dimming power slide.”