A key characteristic of Internet of Things (IoT) devices is their ability to pass data over a low-energy wireless link. The sensitive nature of the data that needs to be transmitted and received means measures need to be taken to secure the link. As well as using encrypted communications, the risk of eavesdropping can be reduced by restricting the transmit power of nodes on the network and using coding schemes that make the bits difficult to distinguish from random noise.

As a result, RF sensitivity plays a large role in enhancing security as it allows lower power levels to be used and for more advanced coding schemes to be employed. However, the demand for reception sensitivity places stringent demands on the noise levels that can be tolerated within the device. Low-energy radio receivers are typically susceptible to narrowband noise that is focused on specific frequencies, particularly as the protocols will often use narrowband channels, making avoidance of the interferer more difficult.

Although it is possible to tune clock sources so that the main causes of internal interference avoid generating harmonics that interfere with a particular RF transmission band, the demand for flexibility is making this harder to achieve in practice. White-space radio systems such as Weightless demand that the RF subsystem is frequency agile – so that at times, the receiver needs to contend with interference generated locally. As a result, the suppression of electromagnetic interference (EMI) in the circuit design is becoming increasingly important.

A key source of EMI in any electronic system is the power subsystem. Most designs providing stable power rails at the point of load (POL) have moved from the use of analog low-dropout (LDO) regulators to provide stable power rails to switched-mode DC/ DC converters.  Although switched-mode DC/DC converters provide high efficiency, maximizing the energy that can be recovered from a single battery charge, their switching behavior can be a major source of noise. The primary source is the clock used to drive the pulse-width PWM conversion circuitry.

The regular pulse from PWM as the converter switches on or off in each cycle, depending on the direction of the ramp signal, causes input noise on both line and neutral nodes at the input stage. This noise manifests itself across the harmonics of the switching frequency, so it can easily reach up into the RF range used for transmission and reception. One way to reduce the noise that is coupled to downstream circuits is to use EMI filters. However, these add cost and weight to the overall system, which, in the case of small IoT and wearable devices, is often unacceptable.

An increasingly popular alternative to adding components is to make changes to the PWM-based converter itself. Although the pulses need to be generated on a reasonably regular basis, the capacitance on the output used to smooth out the voltages on the power rails means that the pulses of energy do not need to be supplied at a precise time. Instead, the clock signal that drives the PWM circuit can be modulated so that the interference related to that clock is spread over a wider bandwidth.

The technique was first explored as a means of EMI reduction almost 20 years ago, documented by Hewlett-Packard engineer Cornelis Hoekstra in the company’s technical journal, primarily to deal with the impact of high harmonics, which were proving more difficult to shield against and which can adversely affect RF signals and reception quality. Hoekstra’s paper has become the standard reference for what has become known as spread-spectrum clocking.

The first schemes tried by HP were based on very simple square-wave modulation. The result – lag and overshoot in the circuitry mean that the clock frequency would not simply shift between two discrete values but was not a direct shift from one frequency. Despite the simplicity of the scheme, it successfully spread the peaks so that equipment could pass the FCC radiated-emissions tests that HP was concerned about at the time. 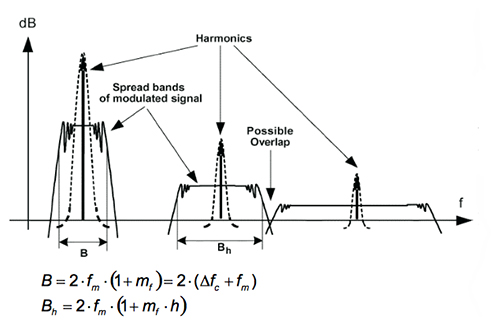 Later attempts at spread-spectrum modulation have focused on more sophisticated clock-control techniques, using sine, triangle wave modulation as well as random modulation. These techniques have now carried over from the main system clock to the DC/DC converters and other power systems used in noise-sensitive applications. 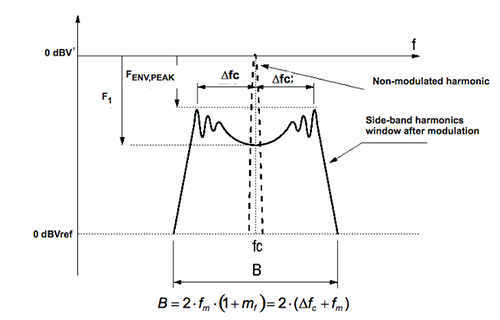 Figure 2: Spectrum of a sine wave modulated by a sine modulator.

The LTC6909 spread-spectrum oscillator from Linear Technology has been designed to work with DC/DC converters such as the LTM4601 to provide improvements in EMI at the peak frequency of up to 10 dB. For systems that need to draw larger amounts of power, the LTC6909 can generate up to eight phase-synchronized outputs to drive multiple DC/DC converters. The phase synchronization ensures that the output ripple is minimized by ensuring that each converter switches during a different part of an overall clock cycle.

With the LTC6909, when spread-spectrum mode is enabled, filtered pseudorandom noise is used to modulate the master clock signal. The modulation produces an approximately flat frequency spectrum, centered about the set frequency with a bandwidth equal to approximately twenty percent of the center frequency. The state of the MOD pin used to select the spread-spectrum mode determines the modulation rate, from fout/16 to fout/64. The oscillator is optimized for output frequencies between 500 kHz and 10 MHz. 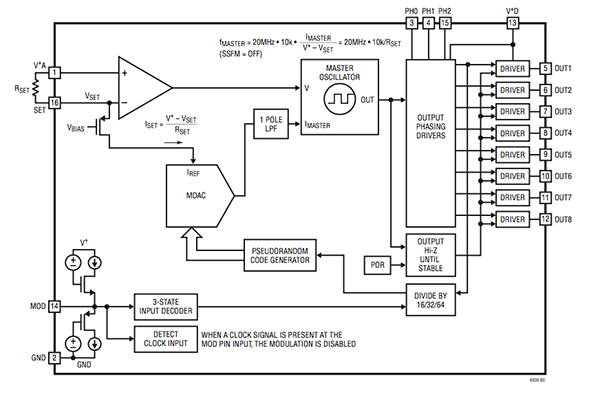 Texas Instruments’ TPS8267x is a complete 600 mA DC/DC step-down converter intended for low-power applications that integrates a spread-spectrum frequency modulator. Also included in the package are the switching regulator, inductor and both input and output capacitors, suiting the micro-SIP device to space-sensitive IoT applications.

Spread-spectrum techniques can be extended beyond DC/DC converters to IoT instruments that require isolated power rails. The Maxim Integrated MAX13253 is a 1 A, push-pull, transformer driver that has its own internal oscillator that operates from a single +3 V to +5.5 V supply. The transformer’s secondary-to-primary winding ratio defines the output voltage, allowing selection of virtually any isolated output voltage with galvanic isolation.

The integrated oscillator drives a pair of n-channel power switches using pin-selectable spread-spectrum oscillation. Further reductions to EMI are obtained through the use of slew-rate control.

As IoT applications become more common and the focus on energy efficiency together with RF sensitivity becomes more important, we can expect techniques such as spread-spectrum power control to be explored further.