Like it or loath it, the automotive industry is moving inexorably closer to the autonomous vehicle and the reason is not to make the driver’s life simpler but an attempt to eradicate collisions on the road. With trials already taking place, the speed bumps in the road to autonomy are less likely to be technical and more likely to be litigious. However, the industry as a whole is committed to enabling a new era in transport.

In response to the emerging but growing demand for the various and increasingly more sophisticated Advanced Driver Assistance Systems (ADAS) now being offered by car manufacturers, there is an equally sophisticated range of integrated solutions now available and/or being developed. These devices will be crucial in supporting this step-change and, in particular, in offering the combination of safety, security and support that will be needed to enable truly autonomous vehicles. Many of these elements are now being integrated in a single device, partly to meet commercial requirements and partly to comply with internationally recognized safety standards.

The road to full autonomy is long, winding and laden with unsigned forks in the road; it’s going to take a while to get there. However, that doesn’t mean it won’t happen, in fact it’s almost a certainty because the momentum behind it is equaled by the anticipation of its benefits. Autonomous cars ‘could’ reduce road traffic incidents to zero, and give an aging population continued independence long after the ability to control a vehicle has left the driver. Many, if not all, insurance companies are already conducting extensive research into how this will impact the insurance industry. Currently, the driver is deemed liable when in control of a car whether they are using an ADAS feature (such as adaptive cruise control or automatic emergency braking) or not. If an insurer wants to prove otherwise they must pursue that claim with the car manufacturer. However, once full autonomy arrives it is likely that the driver will, under certain conditions, be legally allowed to be distracted while driving (to use a phone, or browse the internet, for example). This has raised many questions in the insurance industry.

The technology is already here but it needs to be tested, and retested, before it makes it to the everyday driver. Tests are underway, of course, which implicitly means that the technology is available and, interestingly, it’s largely production-ready. The standards in place to ensure complete safety may not be available but the ones that are — the likes of ISO 26262 ASIL-D — and research projects both past and present — such as EVITA (E-safety Vehicle Intrusion Protected Applications) have helped shape the direction semiconductor manufacturers are taking when developing integrated solutions.

Some of these features are safety-specific as opposed to automotive-specific, making it more commercially viable for Integrated Device Manufacturers (IDMs) to implement them. As a result, many features are now commonplace in a number of safety- and/or security-related applications.

Software plays a prime role in most applications today, but in a safety-critical scenario the reliable execution of code that controls mechanical systems becomes even more critical. For this reason, most devices intended for use in safety-critical applications implement dual processors that operate in lockstep; code executes on both processors at the same time but often one or two instructions out of phase. This protects the system from a single fault on the main processor from causing system-wide failure. It’s a feature supported by ARM’s Cortex-R range of processors and is exemplified by Texas Instruments’ automotive-grade TMS570LS1227, which features dual Cortex-R4F cores running in lockstep. A functional block diagram is shown in Figure 1. 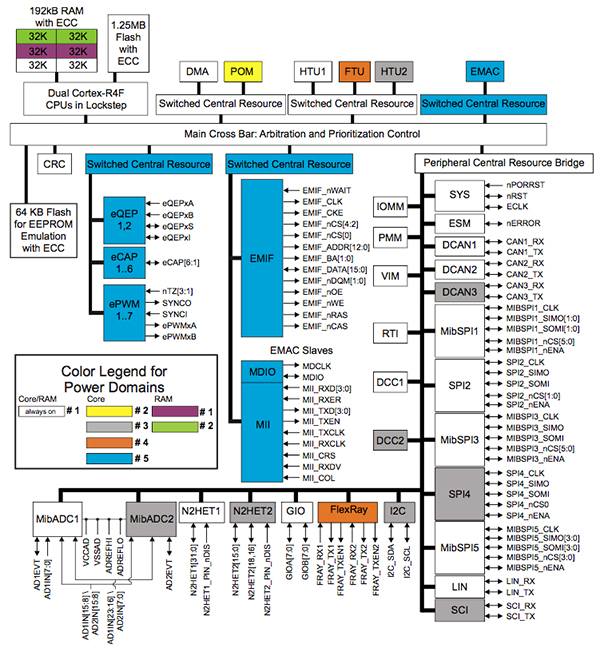 Processors running in lockstep normally execute code from the same protected ECC (error correcting code) memory. The TMS570LS1227 features 1.25 Mbyte of Flash and 192 kbyte of RAM with single-bit error correction and double-bit error detection. CPU and memory BIST (built-in self-test) logic is also integrated. The R nomenclature for the Cortex core denotes ‘Real Time’, which is essential in a safety-critical application such as an ADAS. The TI device builds on this by integrating peripherals targeting real-time control-based applications, which includes two Next Generation High-End Timer (N2HET) timing co-processors. N2HET is a software-controlled timer implemented using a RISC architecture with dedicated timer micromachine and I/O port. It can be used for PWM output, capture or compare, or as GPIO. TI says it is particularly well suited for applications that require multiple sensor information and the need to drive actuators with complex and accurate time pulses. A High-End Timer Transfer (HTU) with a built-in Memory Protection Unit (MPU) can perform DMA-type transactions to transfer N2HET data to or from main memory.

The use of dual-core devices dates back to before the Cortex-R family, of course, and one of the most widely deployed cores in automotive applications (as well as others) is the power core. Now less widely adopted for new designs, it is still supported by a number of manufacturers targeting automotive applications (most of which offer ARM-based solutions too).

One example is the SPC56XL60/54 from STMicroelectronics, which also supports lockstep execution, but it goes further in duplicating hardware features to create what it calls the ‘Sphere of Replication’ (SoR) and comprises key components including the e200z4d cores, the eDMA and crossbar switch (Figure 2). Together with a number of BIST and MPU features, power management, cyclic redundancy check and replicated safety enhanced watchdog features allow the SPC56XL60/54 to meet SIL3/ASIL-D standards. 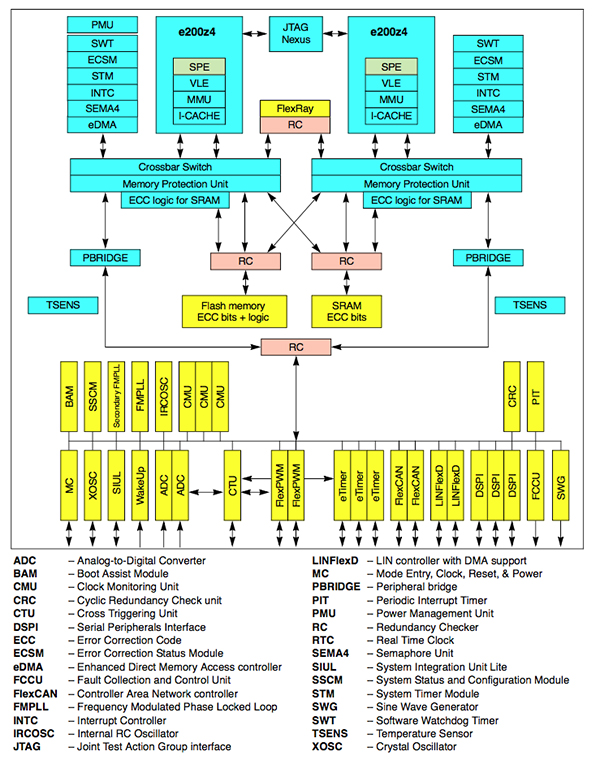 Figure 2: Block Diagram of the SPC56XL60/54 from STMicroelectronics, which features the Sphere of Replication for key components, including the CPU cores, eDMA and crossbar switch.

One of the most rapidly adopted ADAS features in use today is the so-called Birds’ Eye View parking assist system, which uses multiple cameras to create a virtual real-time video stream of what a bird might see if it were looking down on a vehicle. Such systems employ up to five wide-angle lenses whose streams must be corrected and combined to create the virtual point-of-view. The requirements for the processing element in such a system are not perhaps as safety-critical as some of the more autonomous applications, but there is no less demand for safety in operation. An example of a device used in this kind of application is the MPC5604E from Freescale, which is related to the MPC5604P family that was designed for automotive chassis and safety applications. As such, the MPC5604E shares most of the core platform and basic infrastructure but with different functional IP blocks to allow it to target gateway systems. A gateway system in this kind of ADAS is used to rapidly move data from different sources via Ethernet. As Figure 3 shows, the architecture has been designed specifically for this class of application. 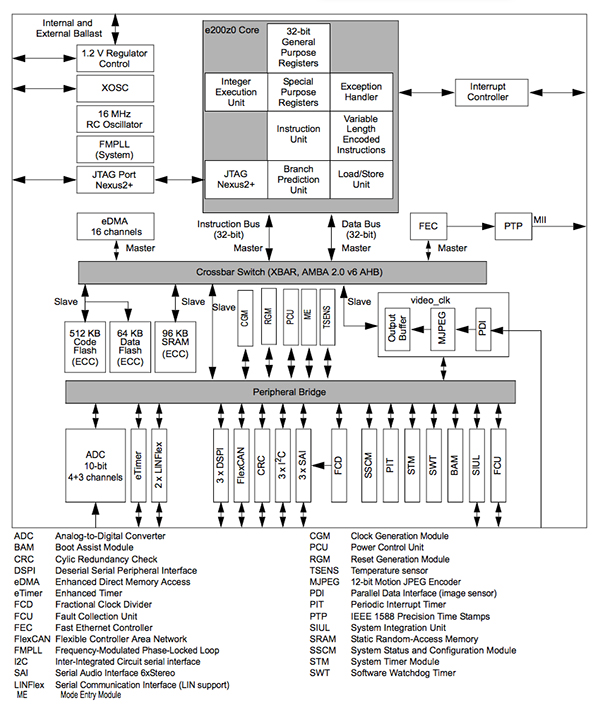 While the car has been refined over the last 100 years or so to improve efficiency, safety and comfort — both inside and out — it has never faced change on the scale that autonomy will bring. Varying from simple assistance to full driverless, the systems available now and being developed will result in a massive leap for the industry and consumers.

The prospect of zero accidents, reduced congestion and virtually unlimited capacity for mobility means that in the future we will all likely crave autonomous vehicles. It is and will continue to be met with resistance from across society, for various reasons, but it seems highly unlikely that this will halt and reverse the direction in which this particular moveable object is travelling. The technology is here, today. Trials are taking place and some regions of the world have already passed autonomous cars in to law, all of which is converging to create a huge opportunity for the entire industry.