Unit shipments of power transistors will grow 11 percent in 2011, driving revenue to a record $13.1 billion. 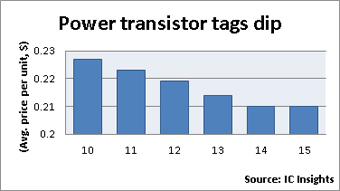 The average price of a power transistor will drop slightly 2014, despite robust demand.The power transistor market will grow 9 percent to $13.1 billion in 2011, according to a new report by market researcher IC Insights.

Sales of modules built with insulated gate bipolar transistors (IGBTs) will rise 10 percent to $2.5 billion in 2011, while IGBT transistor products and power field-effect transistors (FETs) are forecast to grow 9 percent this year to $960 million and $6.9 billion, respectively.

IGBT modules, IGBT transistors, and power FETs for low- and high-voltage applications will achieve sales records in 2011, according to IC Insights.

Between 2010 and 2015, total power transistor revenue is expected to grow at a compound annual growth rate (CAGR) of 6.4 percent, reaching $16.3 billion.