The USB 3.0 standard (or SuperSpeed as it is commonly referred to) incorporates full-duplex communications allowing for greatly improved data transfer speeds. Previous USB versions have used half-duplex communication. There are many other advantages to SuperSpeed USB. For one, Universal Serial Bus is the most successful interface in the history of personal computing, with an estimated installed base of 10+ billion units and growing at an estimated 3+ billion units a year. One advantage of this newer SuperSpeed version is the substantial performance increase, enabling a signaling rate of up to 4.8 gigabits per second; which equates to a ten times performance increase over the previous USB 2.0 version. An example of fast Sync-N-Go technology is downloading a 25 GB HD movie from your home server to your notebook computer. With USB 2.0, this would take approximately 14 minutes. With USB 3.0 this same task would take a little over one minute. In addition, USB 3.0 uses less power than previous USB versions and is backward compatible with USB 2.0. However, users will not get the higher speeds of USB 3.0 unless the complete bus is USB 3.0. For example, plugging in a USB 3.0 printer to a USB 2.0 computer port will result in the slower data transfer rates of USB 2.0.

Due to the advent of high definition video, terabyte storage devices, high megapixel digital cameras, and portable media players, to name a few, the need for faster data transfer rates is certainly upon us (see Figure 8 near the end of this article). Other than transferring data quickly and efficiently, SuperSpeed USB also acts as a charging medium to charge all of your USB devices twice as fast as previous USB versions. SuperSpeed USB also utilizes one-third of the power of the previous USB version to transfer the same amount of data.

The latest version of the USB Charging specification – version 1.2, provides the infrastructure to allow USB to charge devices at up to 5 amps (25 watts) per port; previous versions of the specification only allowed up to 500 mA per port. Speculatively, this will lead to the standardization of device charging, which points to the consumer being able to purchase a single device charger to charge multiple devices. Currently, one often needs several different chargers due to the varying electrical requirements of the device. For example, many smartphones utilize a charger that is rated at 1 A at 5 V, while iPads require a charger that is rated at 2.1 A at 5 V. In addition, this new specification allows the USB host and device to communicate with one another in order to determine the device’s optimal charging capability; USB can then choose from three different ports:

This makes it possible for a computer to reconfigure the USB port to “Dedicated charging”, which would charge a device over USB even when the computer is powered off. Because of these new capabilities you would not need to carry around an independent charger for each of your devices.

Some of the applications for USB SuperSpeed range from personal computer related peripherals such as external storage devices, adapter cards, hubs, Flash drives - to cameras and video recorders. Additionally, products such as handheld data collection devices, electronic medical instruments, security and surveillance products, and industrial automation devices can also benefit from SuperSpeed USB’s improvements. Really, any product that needs the capability of transferring data from Point A to Point B. ASSMANN WSW Components offers cable assemblies up to 5 meters (16.4 ft.) in length.

ASSMANN WSW Components offers the SuperSpeed USB Standard-A connector in four different types that can be seen in Figure 2. The plug is available in right-angle surface PCB mount, and in a solder-type mount that can be used for cable assemblies. The receptacles are available in a PCB-mount right-angle orientation in either surface-mount or through-hole technology. 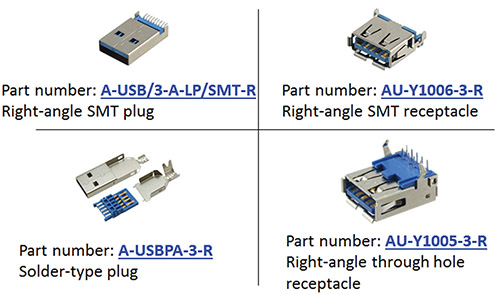 ASSMANN WSW Components offers the SuperSpeed USB Standard-B connector in two different types (as seen in Figure 4). The receptacle is available in a right-angle orientation for PCB through-hole mounting. The plug is available in a solder-type style for cable-mount applications. 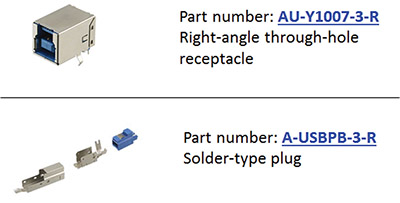 Currently, ASSMANN WSW Components offers both the Micro-AB and Micro-B connectors in a right-angle orientation. As seen in Figure 6 below, both are PCB surface-mount versions, and are on tape-and-reel packaging.

The ASSMANN WSW Components standard SuperSpeed cable offering, shown in Figure 7 - consists of the most popular cables required for quality SuperSpeed connections. Most are available in 1, 2, 3, and 5 meter lengths. The new 3.0 cables and connectors (Standard-A and Standard-B) now utilize nine contacts as opposed to four in USB 2.0. The speed increase is made in the addition of these new contacts, of which, two pair are new for SuperSpeed and the last contact is the ground shield. These cables support Bi-directional (full-duplex) data transfers. 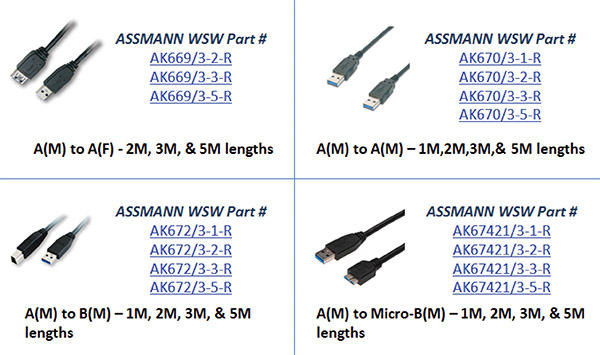 As one can see from the chart in Figure 8, data transfer times are greatly improved with USB 3.0. Considering emerging data-intensive technologies such as HD Video, terabyte-sized external storage, and audio/video streaming, USB 3.0 is a significant time-saver when transferring data from Point A to Point B. Not to mention that it also uses two-thirds less power, while at the same time delivering twice the charging power of USB 2.0; thus charging devices faster and more efficiently.

With these advantages in mind, USB 3.0 is an excellent solution to working with today’s data intensive applications.

In summary, ASSMANN WSW Components offers a full line of USB 3.0 products, to include standard board and cable-mount connectors along with quality cable assemblies, which are all RoHS compliant. Their products are constructed of high quality materials and they conform to the USB 3.0 specification.