LED manufacturers continue to innovate by delivering new devices that offer smaller packaging, higher performance, and lower system cost. They also are starting to focus more on developing new LED families for specific applications, which should help with part selections. These new designs target a wide range of applications from stadium and other outdoor lighting to retail and architectural lighting. Many of them are based on proprietary technology advances such as Cree’s SC5 Technology Platform and Lumileds’ CrispWhite technology.

For example, two big areas of improvement for Cree Inc. continue to center on next-generation LEDs that deliver higher light output and system cost reductions. One of the most recent advances is the SC5 Technology Platform, which offers higher lumen density as well as improvements in reliability and color consistency.

We’ll look at several newer examples of Cree’s LED families based on the SC5 Technology Platform, starting with the LMH2+ LED module. The LMH2+ is an extension of Cree’s LMH2 LED family. This device delivers 30 percent better performance than the previous generation in the same form factor, providing “an unprecedented” efficacy of 125 lumens per watt with color-quality greater than 90 CRI. This means that lighting designers can achieve a system efficacy of 100 lumens-per-watt with high light quality, while enabling smaller luminaire designs and lowering system cost.

These LMH2+ LED modules can be used in a variety of applications, including directional and non-directional lighting, downlights, and low- and high-bay lights such as those found in manufacturing, warehouse, and distribution centers.

The technology foundation of the LMH2 is Cree’s SC5 Technology Platform. The LMH2+ LED module is available at 1250, 2000, and 3000 lumens and in color temperatures of 2700 K, 3000 K, 3500 K, and 4000 K at 90+ CRI. The product delivers the same efficacy across all color temperatures. The platform is designed for 50,000 hours of operation and is dimmable to five percent. It’s also supported by Cree’s five-year warranty.

The LED module targets lighting manufacturers that face more challenging installations such as those with space constraints or higher ambient temperatures. Another advantage for existing LMH2 customers is that the LMH2+ is a drop-in upgrade for LMH2-based designs, and customers can take advantage of existing ecosystems, tooling, and optic-design elements, says Cree, to lower design cost and bring product to market faster. If luminaire manufacturers are applying for Energy Star qualification, they have access to performance data including LM-80 reports. 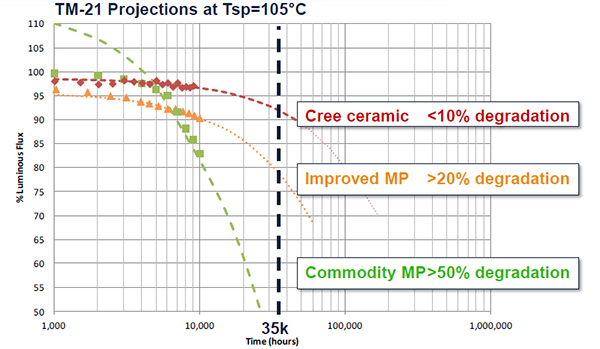 Also using Cree SC5 Technology, the ceramic LEDs are said to improve manufacturing efficiency compared to mid-power LEDs. The devices are housed in a 7 mm x 7 mm package, which enables a smaller board size, tighter beam angle, and an appearance more like mid-power LEDs, according to Cree. Another advantage over mid-power LEDs is that it eliminates color-kitting issues, says Cree. Designers get one SKU per CCT/CRI and consistency from batch-to-batch without mixing reels.

The big improvement of Cree’s CXB family over their CXA LED arrays is that it delivers up to 33 percent higher efficacy than the CXA family in the same form factors. The advantage of the same physical size as the CXA product is that lighting designers can use existing optical, mechanical, and electrical design elements, which reduces costs and simplifies design. Like the other LEDs previously discussed, it also uses Cree’s SC5 Technology Platform.

Cree also touts a big cost savings of up to 60 percent with the CXB LED arrays, thanks in part to the improvement in lumen density. Key target applications for the CoB LEDs include track, downlight, and outdoor lighting.

For lighting designers, the CXB LED arrays allows them to achieve the same or better performance with a smaller light-emitting surface (LES) compared to earlier products. An example provided by Cree shows that a 19 mm LES LED with a 3800 lumen output can be replaced by a 12 mm LES LED. LM-80 data is available for Energy Star qualification.

Cree’s Extreme-High-Power (XHP) family is touted as the first commercially available LEDs to take full advantage of Cree’s SC5 Technology Platform. Cree says the XLamp XPH50 and XHP70 LEDs “shatter the industry’s perceived limit of LED lumen density by delivering up to 2546 lumens at 19 watts in a 5.0 mm x 5.0 mm package and up to 4022 lumens at 32 watts from a 7.0 mm x 7.0 mm package, respectively.” These XHP LEDs can reduce system costs by up to 40 percent in most lighting applications, according to Cree.

Compared to previous-generation LEDs with the same amount of light output, Cree improved the lifetime of the XHP by almost double under the same conditions, which translates to 50,000 hours of lifetime to L90, which is only a 10 percent degradation from initial condition, notes Cree.

Another LED manufacturer that continues to innovate is Philips Lumileds. The company also introduced several advances over the past year led by the LUXEON CoB with its proprietary CrispWhite technology, which was developed for retail lighting applications. The new technology makes whites appear more vivid and delivers good saturation of all colors, including red.

All CrispWhite versions are available within 3-step MacAdam Ellipse below the Black Body Line (BBL), which makes them suitable as replacements for ceramic-discharge metal-halide (CDM) lamps that are traditionally used in retail-lighting applications. To ensure uniform optical performance, all LUXEON CoB LEDs are available in 3-step (80 and 90 CRI) as well as 5-step (70 CRI) MacAdam Ellipse.

This technology is available for the complete line of LUXEON CoB arrays. The key features: a high combination of efficacy and lumen density, with a lumen range of 1,000 to 10,000 lm and typical efficacy of 100 lm/W. The lumen values in the CoB range represent traditional lighting lumen packages.

The CoB line also offers a wide range of color temperatures to help meet demand for very-low CCT/CRI combinations, especially in hospitality, that use halogen or incandescent lamps that are typically dimmed in these applications, according to Lumileds.

Lumileds recently launched the LUXEON CoB Compact Range (Figure 2) for retrofit lamps and spotlights of 1000 lm. The same optic for the arrays can be used for both a 35 W equivalent and a 50 W equivalent GU10 or MR16 lamp, which helps reduce system cost and development time. Applications for Compact Range include retrofit and directional lamps for retail, home, and hospitality. 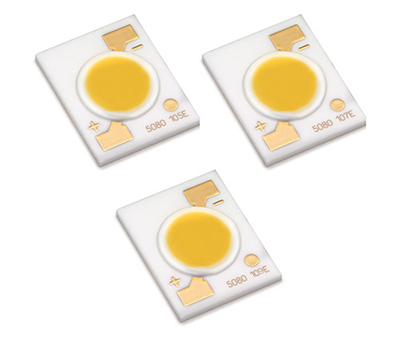 Figure 2: The LUXEON CoB Compact Range from Lumileds delivers a combination of high efficacy, high flux, and small LES of 6.5 mm for retrofit lamps and spotlights of 1000 lumens. These devices also can be used with Lumileds’ CrispWhite technology. (Courtesy of Lumileds)

The CoB Compact Range arrays offer high efficacy, high flux, and a small LES of 6.5 mm. One example is the LUXEON CoB 109 that achieves 70,000 candelas and 1,500 lumens with a 10˚ beam angle. The Compact Range 109 also will be available with CrispWhite Technology. An ecosystem of compatible drivers, optics, and holders are available to help speed up time to market, said Lumileds.

In a highly competitive pricing environment, LED manufacturers have to compete on product performance. As a result, they need to continually deliver on improvements in efficacy, light quality, lumens output, and of course, reliability and lifetimes. This is good news for lighting manufacturers that will get more choices in terms of lighting performance and packaging that enable not only lower-cost savings but better LED options for their applications. The reason is that LED manufacturers need to develop differentiated products, and one of the trends that we’re likely to see are more technologies developed specifically for targeted applications.

For more information on the LEDs discussed in this article, use the links provided to access product pages on the Hotenda website.