According to the Semiconductor Industry Association, the consumer electronics market segment became the largest user and primary driver of semiconductors in 2004 and continues to grow ever larger than the corporate segment. In consumer electronics, portable products are the fastest growing area. Cell phones alone are projected to increase from over a billion units in 2007 to almost 1.5 billion in 2010, according to market research firm Gartner Dataquest.

While providing high-volume opportunities for suppliers of the right components, consumer electronics and especially the portable portion place high demand on suppliers, requiring small size, high functionality, low-power consumption, and low cost as the major criteria for acceptance. In this highly competitive arena, the Hall effect is proving to be the right solution for adding functionality to cellular phones, portable computers, digital cameras, navigation systems, electronic toys, and more. The Hall effect is a magnetic technology popularized in the latter part of the 20th century through its implementation using LSI (large-scale integration) IC technology and advanced packaging.

Portable computers, flip or jack-knife style phones, and other portable devices with a rotating hinge and clam-shell design (see Figure 1) have historically used mechanical switches to indicate an open or closed position. Knowing whether the device is open or closed is essential for applying power to the sleeping circuitry and for returning the device to the sleep mode to conserve power. 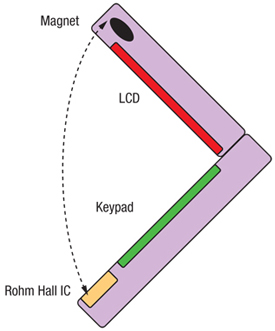 Some newer cell phones, digital cameras, and other portable instruments use a sliding mechanism (see Figure 2) that reveals the display or keyboard, which are normally covered when the unit is in standby mode. In these applications, a Hall effect IC switch/magnet combination is commonly used. The IC is often a unipolar Hall effect IC. Unipolar Hall effect IC switches only operate when a magnetic field of sufficient strength and polarity is detected. S-pole detecting devices are most common, but N-pole detecting devices are also available. 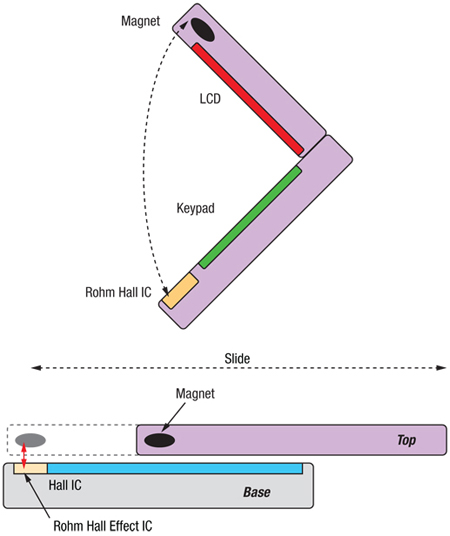 Omnipolar Hall effect IC switches capable of detecting a magnetic field of either polarity can also be used in this application. Unipolar devices typically require less power to operate but the magnet must be properly oriented, while omnipolar devices operate without regard to magnet orientation.

In another variation, the screen pivots to allow the front or back face of the display to be viewed. The system must discern which side of the display is facing the viewer. This application is commonly found on PDAs, digital cameras, and tablet-style PCs. Some flat-panel displays for desktop computers can rotate between portrait and landscape modes.

In these applications, it is necessary to use a Hall effect IC sensor that is not only capable of detecting the magnetic field but also of discriminating between the field’s polarities (see Figure 3).

Figure 3: Polarity discriminating omnipolar Hall effect IC switches can be used to control the operation and orientation of multiple displays.

An increasingly important function in multi-function cell phones is the jog wheel or trackball (see Figure 4), a human interface that allows the user to scroll through a list, increase or decrease the volume, or implement another function. Some lower-cost MP3 players use a jog wheel that moves clockwise or counterclockwise to select MP3 songs or scroll through a list of menu items.

Capacitive and even resistive touch sensing are also used for these applications, but the Hall effect sensor provides a lower-cost solution.

This application requires the use of two bipolar latching Hall effect ICs. The jog wheel has a series of alternating N- and S-pole magnets. The two Hall effect ICs operating in combination are used to detect either clockwise or counterclockwise rotation of the wheel.

More advanced applications in phones, computers, and game handsets use a trackball that moves up and down and right and left. These designs use four Hall effect switches to determine the direction and how fast the ball is moving.

While mobile phones use Hall effect sensors for a variety of functions, some of these same functions are found in portable computers, digital still cameras, digital video cameras, video game controllers, navigation systems, and electronic toys.

Current flowing in a conductor perpendicular to a magnet field causes a voltage, known as the Hall voltage, on opposite sides of the conductor. While this has been known since Edwin Hall discovered the phenomenon in 1879, semiconductor technology has reduced the size of Hall effect devices and added several key features that make Hall effect switches, sensors, and other products extremely useful in many applications. As shown in Figure 5, a magnetic field perpendicular to the plane of the semiconductor package and the chip inside it causes a low-level Hall voltage. The Hall element is configured as a Wheatstone bridge, requiring additional circuitry including amplification and offset voltage compensation.

Design considerations for Hall effect sensing applications include magnetic strength and proximity of the magnet. For the smallest sensing system, neodymium magnets are recommended over ferrite magnets. A 4 mm x 4 mm neodymium magnet with a thickness of 1 mm or 3 mm operates with a separation of 7.66 mm to 10.4 mm between the magnet and the Hall effect IC. Increasing the detection distance requires increasing the thickness, the sectional area, or both.

For some cell phones, MR (magnetoresistive), GMR (giant magnetoresistive), or AMR (anisotropic magnetoresistive) sensing techniques have also been used. In these techniques, the field direction is opposite to the Hall effect field direction, which requires an orthogonal magnetic field. In general, the magnet strength needs to be about twice as large as in a Hall effect device. However, before the introduction of chip-scale packaging for Hall effect sensors, MR packaging was smaller. With newer, smaller Hall effect ICs such as ROHM’s products in a 1.1 mm x 1.1 mm x 0.5 mm CSP (chip-scale package), the MR package size advantage has essentially disappeared, especially since designers can save space and cost by using a smaller magnet. 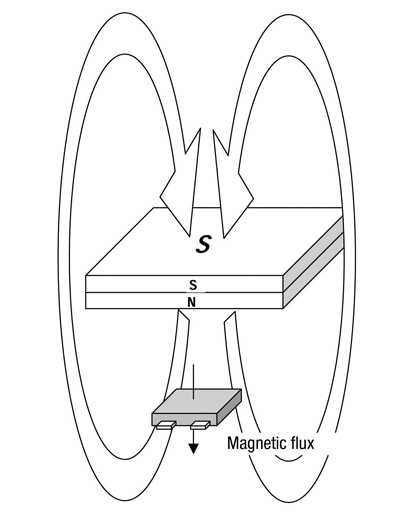 Figure 5: A Hall voltage results from current flow in the semiconductor material when a magnet is located perpendicular to the flow.

ROHM’s Hall effect ICs use a single, monolithic silicon chip with built-in circuitry to provide additional functions and ease of interfacing. Also, instead of an analog output that is always on, ROHM pioneered the use of CMOS logic at the output to provide low power consumption. Today, all ROHM Hall effect switches use CMOS push-pull logic to provide a digital output that eliminates the need for an external pull-up resistor required for the single FET output common in other Hall effect switches. The CMOS output interfaces directly to microcontrollers. Figure 6 shows the Hall effect element with the additional circuitry common to all ROHM Hall effect ICs that includes timing logic (SW), dynamic offset cancellation, amplification, sample and hold, comparator, oscillator (OSC), latch, and the push-pull output. Some of ROHM’s Hall effect sensors have two push-pull outputs for even greater functionality.

Sample and hold circuitry reduces power consumption for battery-powered applications. ROHM’s Hall effect ICs typically have a sampling period of 50 milliseconds. As shown in Figure 7, the device wakes up for a 48-µs sample of the magnetic field and then returns to sleep. As a result, the typical operating current is only 8 µA for 2.7 V applications and an even lower 5 µA for 1.8 V operation. Since ROHM Hall effect ICs were designed for battery-powered applications, they can operate from voltages as low as 1.65 V to 3.3 V. The bipolar Hall effect ICs designed for jog wheel or trackball applications have a much faster sampling period of 0.5 ms. 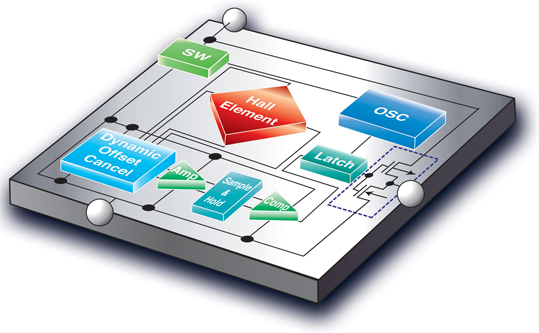 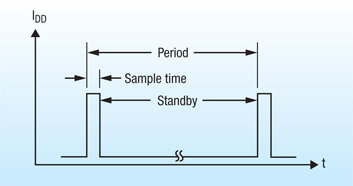 Figure 7: The typical sample time of 48 µs for each 50 ms period reduces the average current draw to 8 µA or even 5 µA.

The design of the sensing element and circuitry in ROHM Hall effect ICs ensures high ESD (electrostatic discharge) tolerance with ratings of up to 8 kV as measured in the human body model. Operating over a temperature range of -40°C to 85°C, the monolithic silicon Hall effect sensor has a high level of magnetic flux density detection stability versus temperature. In addition, many models have a high sensitivity with a typical operating point of 3.7 mT (3.0 mT on ICs designed for 1.8 V operation). Dynamic offset cancellation eliminates the differential in the Hall element Wheatstone bridge for improved accuracy, and a hysteresis comparator increases noise resistance. 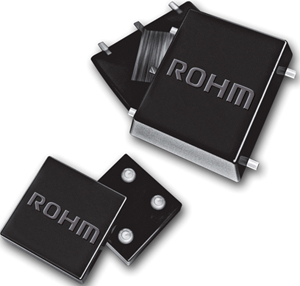 Figure 8: ROHM's Hall effect ICs in the surface-mount HVSOF5 package with a footprint of just 1.6 mm x 1.6 mm and in the even smaller VCSP5OL1 1.1-mm square chip-scale package.

To provide the right sensor for a variety of applications, ROHM Hall effect ICs are available in four different designs as shown in Figures 9a through 9d. 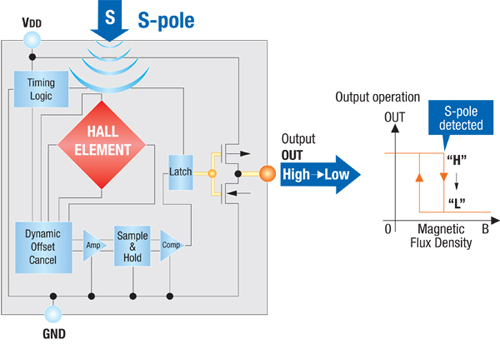 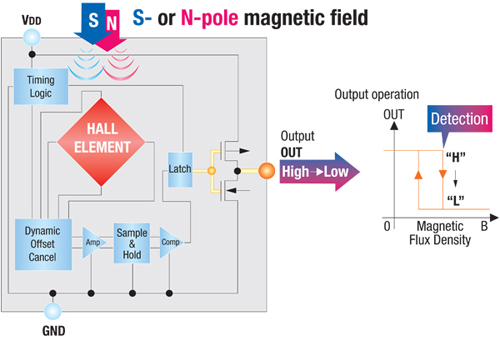 Polarity discriminating omnipolar Hall effect sensors have dual outputs and discern N- and S-poles so position and orientation can be detected. 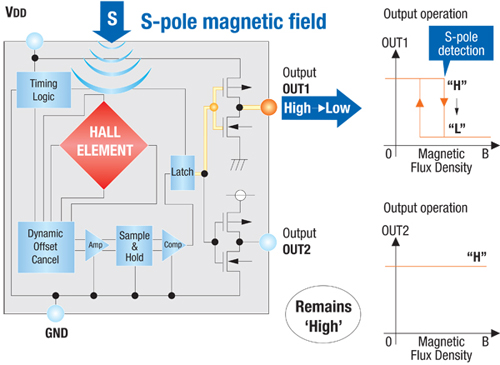 Bipolar (latching) operation Hall effect devices detect alternating poles but do not change state if a pole is not detected. The newest bipolar design, the BU52040HFV, has a 0.5 ms response time, about 100 times faster than other ROHM Hall effect sensors, to meet the requirements of jog wheel applications on digital cameras, mobile phones, PDAs, or MP3 players. 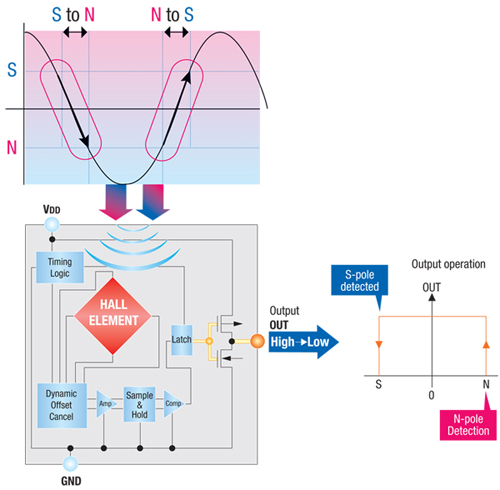 While portable consumer electronic products represent a rapidly growing market for Hall effect switches, it is just one segment which can benefit from the technology. Similar functions are frequently required in the white goods industry, especially for a door open/shut indication. Even automobiles can take advantage of the non-contacting sensing in applications such as steering wheel position/rotation. While products for these applications must meet different specifications, including higher voltage operation than consumer products, they are among the planned additions to ROHM’s product portfolio. Ultimately, several industries will benefit from the use of small but sensitive Hall effect ICs.