Apple buys more semiconductors than any other company, purchasing almost $28 billion of chips this year. 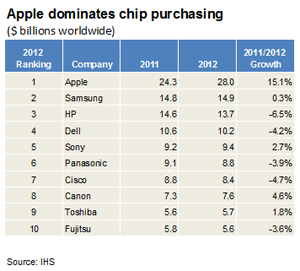 Apple buys the most semiconductors among OEMs, purchasing nearly twice as much as Samsung.Apple’s Inc.’s semiconductor purchases will grow from $24 billion in 2011 to nearly $28 billion in 2012 as the company again will be the leader in chip buying, according to researcher IHS.

Apple’s chip purchases will surpass Samsung, which will buy $19 billion of semiconductors in 2012, IHS reported. Apple will maintain its lead in semiconductor purchases because of continuing strong demand for its products.

With its growth, Apple is gaining more clout in the electronics supply chain and is able to increasingly “dictate semiconductor pricing, control product roadmaps and obtain guaranteed supply and delivery,” said Myson Robles-Bruce, senior analyst for semiconductor spending and design activity at HIS.

Besides buying the most semiconductors, Apple is expected to achieve the strongest growth rate in chip spending among the top semiconductor buying OEMs.

Apple is set to increase its chip buying at a rate nearly three times faster than the next-fastest-rising purchaser, Canon, the eighth largest semiconductor buying company.

Ranking among the top 10 semiconductor purchases in three out of the four major global regions, Apple is positioned at No.1 among all chip buyers in the Asia-Pacific region, No. 2 in the Americas, and No. 6 in EMEA.

Apple is expected to be second to Cisco Systems in semiconductor purchases in the Americas in 2012. Cisco will buy more than $1 billion of semiconductors in the U.S. than Apple because Cisco has more design centers in the U.S.

Cisco also has higher spending on consumer electronics-related chips for set-top boxes, and it makes large semiconductor purchases in support of its business in wired communications equipment in the Americas.

Apple is expected to lead in semiconductor buying in 2013 as well with the projected chip buying growth rate of 12.3 percent, according to IHS.

“Apple will continue to outgrow the other major OEMs in chip purchasing because of its clear vision of the future,” said Robles-Bruce. “The vision includes a strategy to update currently popular products, but also achieve success in other areas of interest such as the television segment.”