DC/DC isolated power converters adhering to a 1/8, 1/16, and 1/32 standardized brick formats offer a number of advantages to design engineers looking for a modular isolated power supply for board mounting.


DC/DC isolated power converters adhering to a 1/8, 1/16, and 1/32 standardized brick formats offer a number of advantages to design engineers looking for a commercial-off-the-shelf (COTS), modular isolated power supply for board mounting.

Key among these benefits are the dozens of established manufacturers who can readily supply proven voltage conversion and regulation modules, in which the thermal management, isolation, power control, sequencing, failure protection and in some cases operational monitoring are balanced to provide a total power solution.

A designer can add a high-power compact brick to his or her board without requiring in-depth knowledge of power supply design. And because the Distributed-power Open Systems Alliance (DOSA) – an industry body comprising 15 power component manufacturers – defines characteristics such as footprints and pinouts, the designer knows in advance how much space to allocate and how to connect the brick to the rest of the circuit.

This article provides an introduction to these compact power supplies, describing their advantages. In addition, since as impressive as these miniature bricks are they do come with some compromises, the article also highlights some design factors that require particular attention.

A DC/DC isolated converter in a fractional brick format is a self-contained, isolated supply module suitable for on-board use. The brick typically comprises all the components (apart from filter circuits) required for a switching power supply including MOSFET switches, energy storage components, and switching controller.

By selecting a brick, an engineer does not have to worry about the intricacies of switching power supply design. The supplier has done all the work to ensure the unit operates optimally. (As detailed later, there is some work to be done though, as these power supplies tend to generate a lot of heat that must be dissipated. And switching power supplies – while relatively efficient – can be noisy and prone to upsetting sensitive silicon unless appropriate filtering is added.)

But perhaps the biggest advantage of the brick and its smaller derivatives is that the module is contained within a pre-defined footprint and adheres to a prescribed form factor. That means that once the engineer has determined his or her input voltage, output voltage(s), and power requirements, the engineer can select the device that meets his or her needs, knowing exactly how big and what its pinout configuration will be. Better yet, if a better or cheaper product from another manufacturer is unearthed late in the design cycle, it can be substituted with absolutely no requirement to change the circuit or board.

The standardization of the brick format comes courtesy of DOSA. The alliance was formed “to ensure future DC/DC product compatibility and standardization within the increasingly fragmented power converter market.” The group has defined interface standards, which include form factors, footprints, pinouts, feature sets, and other parameters permitting alternative sourcing (Figure 1). 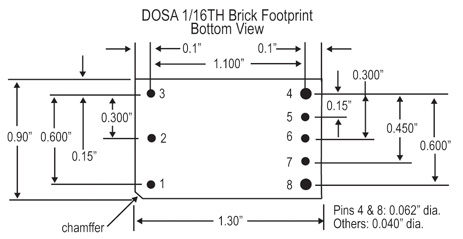 Figure 1: DOSA dimensions for 1/16 brick. Similar specifications are available for other brick sizes.


Members of the alliance include GE, CUI, Delta, Emerson Network Power, FDK, Murata, Power-One, and TDK-Lambda; membership is open to any qualified DC/DC converter manufacturer. Alliance standards information is shared with the market and non-members through early product announcements and the DOSA web site. Pin-for-pin compatibility and independent alternate sources are the primary tenets of the group and member products must meet the alliance standards to carry the DOSA mark.

Improvements in power supply technology, particularly in the efficiency of MOSFET switches, have allowed suppliers to improve the “power density” (power/volume) of the brick. Early full bricks could supply perhaps 50 W, but rapid improvements allowed half-brick designs to meet this requirement soon after. Today, 1/8 bricks can produce in excess of 200 W, 1/16 bricks up to 100 W, and even 1/32 devices can approach 30 W output. 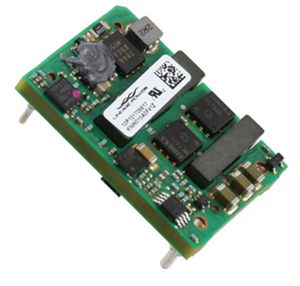 Engineers are typically tempted to fit the highest power density converter available (i.e. the smallest device that meets their power requirements); but that often means specifying the latest (and hence most expensive) device available and running it near to its maximum rating. That can stress the power supply and intensify any temperature hot spots.

It can be worthwhile fitting the next size up (i.e., a 1/8 brick instead of a more compact 1/16 brick) and using a non-leading-edge product to cut expense. Moreover, the larger device will have plenty of headroom to meet the power demand, will operate under less stress, and run cooler. During the product lifecycle the power density of the 1/16 brick will inevitably increase, allowing the engineer to retrofit the smaller device later safe in the knowledge it will then have the additional overhead to run under lower stress.

There are some drawbacks to using a brick converter. The key challenges the engineers must consider are designing input and output filter circuits to limit the voltage and current ripple from a brick that has no room to carry such sophisticated circuits of its own; ensuring that the brick is positioned such that the rapidly switching components don’t create electromagnetic interference (EMI) problems for other sensitive components on the board; and managing the heat generated by a densely-packed device generating so much power.

Switching power supplies typically produce significant voltage ripple at the output and the engineer will need to consider additional passive components on the board on both input and output sides. Further information on filter circuits for switching supplies and positioning considerations for EMI can be found in the TechZone articles “Proper PCB Layout Minimizes Noise Coupling for Point-of-Load Converter Modules,” and “Conducted and Radiated Emissions Reduction Techniques for Power Modules.”

One minor benefit of brick converters compared to other board-mounted switching power supplies is that the operating frequency is typically low (200 to 400 kHz) compared with other types (up to several MHz), so the ripple and EMI challenges are slightly easier to resolve.

When considering thermal management, the key elements are maximum operating temperature and airflow across the converter, which can be either natural convection or forced convection airflow from a cooling fan (Figure 3). For applications constrained to natural convection cooling, brick-type converters must typically be derated from their maximum capabilities, depending upon the maximum ambient air temperature. This can be another incentive to use a larger fractional brick in particular applications.

Figure 3: Simulation of the thermal performance of a 1/16 brick. (Courtesy of Emerson Network Power.)


Many of the brick type converters incorporate a baseplate for conduction cooling, or are offered with a baseplate option. The baseplate improves thermal performance when used in both natural convection and forced convection environments.

Fortunately, most isolated brick converters include thermal shutdown circuitry to protect the converter from damage by overheating. These protective circuits result in shutdown of the converter with automatic recovery upon restoration of normal temperatures.¹ (Emerson Network Power has produced an informative white paper on thermal management of 1/16 brick converters.²)