The advent of digital control in DC/DC converters and point-of-load (POL) regulators was initially driven by telecom and datacom companies who were experiencing an incredible rise in IP traffic. Now, digital control is proliferating into other industries and as a result, there is a need for multi-sourcing of leading-edge power-conversion products. While the distributed-power open-standards alliance (DOSA), which was established in 2004 by leading DC/DC converter manufacturers, has done an adequate job of standardizing a variety of analog-based isolated and non-isolated converters, it is becoming a challenge to standardize those incorporating digital control, which requires a level of software compatibility – such as compatibility of PMBus commands, proprietary controller commands, and configuration files. To address these challenges, last October three leading power supply manufacturers, CUI, Ericsson Power Modules, and Murata Power Solutions came together to form a new power consortium, the Architects of Modern Power, or AMP.

According to AMP members, the goal of the alliance is to realize the most technically advanced end-to-end solutions and provide a complete ecosystem of hardware, software, and support. In essence, AMP is going beyond mechanical and electrical specifications. It is also standardizing the functions of monitoring, control, and communications, as well as creating common configuration files for plug-and-play interoperability to ensure compatibility between each manufacturer’s products. The goal is to create a true multi-source business environment for digital power supplies.

Late last year, the AMP consortium defined two standards for isolated-digital DC/DC bus converters. While the “ABC-ebAMP” standard covered eighth bricks (58.42 x 22.66 mm) ranging from 264 to 300 W output power, the “ABC-qbAMP” standard defined specs for quarter-brick (58.42 x 36.83 mm) supplies ranging from 420 to 468 W. In addition, AMP also created two standards for non-isolated digital POL converters. These include a “microAMP” specification for POL supplies rated at 20 to 25 A in vertical and horizontal configurations, and “megaAMP” for 40 to 50 A vertical and horizontal units. 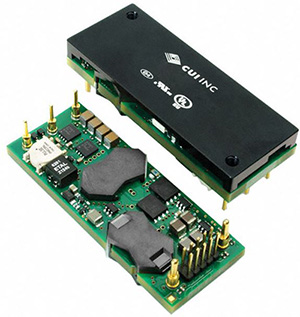 Similarly, CUI’s NEB-264NWA-AN is complaint with the ABC-ebAMP standard, but comes without the digital interface. That means it does not include a PMBus interface for digital communications and commands. A second source for NEB-264DWB-AN is Ericsson Power Modules’ BMR457 series or vice versa.

Meeting ABC-qbAMP specifications is CUI’s NQB-420DWA-AN with an output power of 420 W at 35 A (max) 12 VDC output from a 15-pin DIP module (Figure 2). Offering five digital pins for intermediate bus-converter architecture, the unit includes a digital PMBus interface (revision 1.2) and handles a DC-input voltage range of 36 V to 75 V. Typical conversion efficiency is over 96 percent at half-load, while power density is about 141 W/in2. Plus, it offers an input-to-output isolation of 2250 VDC, optional baseplate for high-temperature applications, droop-load sharing with 10 percent current-share accuracy and 2.9 million hours of MTBF. Additionally, the part is configurable and features voltage/current/temperature monitoring and power-good signal. A version without the digital PMBus interface is the CUI NQB-420NWA-AN. 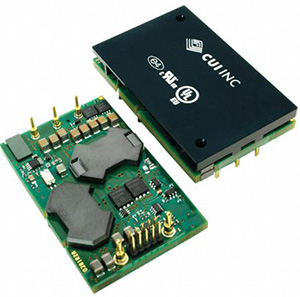 Other sources in this category include Murata and Ericsson. Murata’s 420 W digital quarter brick meeting the ABC-qbAMP specs is designated DBQ0135V2NBC. It is a true second source to the NQB-D series from CUI. The equivalent Ericsson part is BMR456.

In the non-isolated POL arena, all three members have released megaAMP-50-compliant digital POL modules. Murata, for example, is offering its OKDY-T/50-W12-001-C, which is capable of delivering 50 A/165 W from three different package formats, through-hole, single-in-line (SIP), and surface-mount (Figure 3). Typical conversion efficiency is better than 97 percent. PMBus compatibility allows monitoring and configuration of critical system-level parameters. The unit’s DC input voltage range is 4.5 V to 14 V, while the DC output range is 0.6 V to 3.3 V.  Similar compatible products from CUI include its NDM2Z-50, while Ericsson offers the BMR464. A 40 A version from Murata is the OKDY-T/40-W12-001-C. 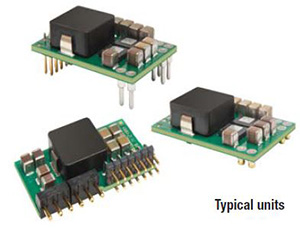 The microAMP specifications have been crafted for non-isolated digital POL modules rated at 25 A and below. In fact, output current range for this standard is 20-25 A. Two suppliers offering microAMP-25-compliant products include CUI and Ericsson. CUI offer its NDM2Z-25, while Ericsson supplies the BMR463.

Although, the AMP Group was founded by CUI, Ericsson Power Modules, and Murata, the group is open to others joining the alliance. However, it requires a full commitment on behalf of any supplier that wants to join the AMP consortium. According to the AMP Group, new members must be willing to work in collaboration with one another to ensure product compatibility while influencing the development roadmap.