The growth in energy supply from renewable sources: solar, wind, and wave or tidal power, is also prompting an increased demand for more accurate high-current measurement solutions. This isn’t simply to enable utility companies to better measure the power contributed to the grid for billing purposes, or to achieve more precise control of the generating plant. Rather, the need for improved accuracy over more conventional electricity metering devices is to ensure the warranted performance of the various elements of a distributed power system. A return to the principles of traditional ammeters that employ shunt resistors for high-current handling appears to be the answer. 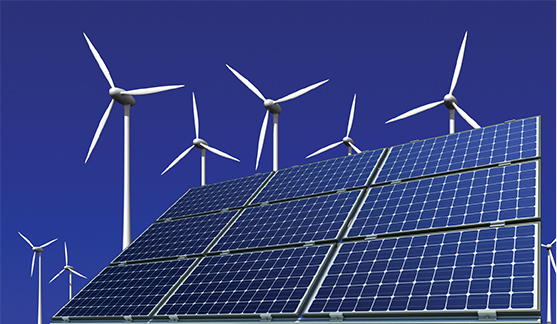 The nature of the renewable power

While some forms of renewable energy, such as hydroelectricity, have been around for many years it is the more recent development of solar and wind generation that have been the focus of attention for governments around the globe as they seek to deliver on their “green energy” policies and commitments.

Unlike established coal, gas and nuclear generating plants which use turbines to directly generate AC (alternating current) power that can be fed into the grid via sub-station transformers, the nature of solar and wind power either generates DC (direct current) power or involves some conversion to and from DC. Solar power from photovoltaic panels is inherently DC generation and needs some form of inverter device to convert it to AC for connection to the grid.  Many wind turbines, especially smaller units deployed in generating electricity for domestic, agricultural and industrial premises, also generate DC.

Even the larger wind turbines found on commercial wind farms, using generators that produce AC, can’t necessarily be directly connected to the grid. This is because not only does the voltage need to be compatible, but also so does the frequency, which is determined by the rotational speed of the turbine that in turn is dependent on wind speed. Gearboxes have been used to increase the rotational speed to overcome this problem, but they are heavy and expensive.  So the trend is towards “direct drive” generators, even though this requires AC outputs to first be converted to DC and then back to AC via an inverter that ensures the correct frequency and voltage for the grid.

Consequently, the DC nature of renewable sources, particularly in distributed systems, demands the means to measure DC as well as AC power. Unfortunately, this rules out current transformers, which are extensively used for AC power measurement and also provide the benefit of galvanic isolation from the circuit being measured. Instruments based on Hall-Effect current transducers can measure DC as well as AC, and provide galvanic isolation, but do not typically provide the required measurement accuracy down to 0.1% or less - this is where ammeters using precision shunt resistors come into play even if they require a separate means of isolation.

The basics of ammeter shunts

Almost anyone who has studied electrical engineering will have come across ammeter shunt resistors. They enable higher currents to be measured than are possible with a normal ammeter because they “shunt” the majority of the current around the meter. The principle involves the insertion of a very low resistance in series with the load, resulting in a small voltage drop across this shunt resistor, which can then be measured with a suitable voltmeter. This allows the current reading to be determined by the simple application of Ohm’s Law so that the meter’s scale can be directly calibrated in Amps. 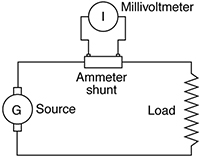 Naturally there is a bit more to ammeter shunts than this. Firstly, shunt resistors are designed to work with voltmeters to provide a full-scale deflection at the shunt’s maximum rated current, usually with standardized voltage drops of 50, 75 or 100 mV. This means that a shunt designed for 100 A operation and a 100 mV drop will have a resistance of just 1 mΩ, with even lower values for higher currents and lower voltage drops. To achieve the necessary accuracy, not only does the resistance need to be precisely defined, but also potential measurement errors need to be eliminated. This is why a four-terminal construction is the norm for high-current shunt resistors, separating the load-current connections from the measurement terminals.

Temperature is a key factor in determining the performance of shunt-based ammeter systems that aim to achieve 0.5, 0.25, and even 0.1% accuracy. Resistance elements made from Manganin® alloy combine precision with a very low temperature coefficient of resistance (TCR), allowing operation over a typical temperature range from -40°C to +60°C. Also, despite their low resistance, because shunt resistors carry the full load current the resulting power dissipation can be significant. A suitable construction is required to aid heat dissipation (by conduction and convection) and, for continuous operation current, the device may require derating to comply with IEEE standards for DC instrument shunts.

Considerations when selecting a shunt resistor

There are a number of important considerations when selecting an off-the-shelf shunt or specifying a custom-designed one for a shunt-based resistance measuring system. It is essential that resistance is constant with the variations in temperature experienced in the system. Designs usually aim to ensure that the maximum temperature of the resistance element is 80°C, with a normal operating range of 40-60°C. Temperatures above 80°C will cause the resistance of the element to drift, with a resulting loss of current-measuring accuracy. The temperature of the element must not exceed 140°C, as this will cause an annealing process which results in a permanent change in its resistance. Care must be taken with the positioning and orientation of shunts to ensure these conditions are met. For example, resistance elements should always be mounted vertically to ensure the maximum free air convection. Heatsinks, and/or forced-air- or water-cooling may be necessary, depending on the application. 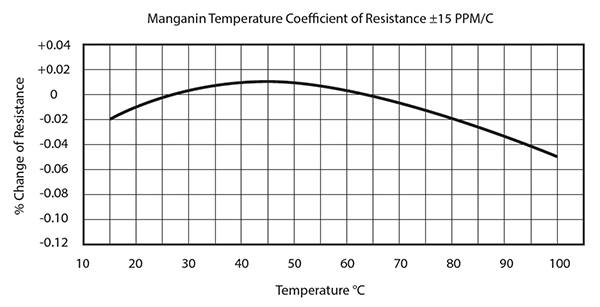 Care must also be taken if the current being measured is at a high voltage, as this voltage will be present in the connecting leads and the reading instrument. Wherever possible, the shunt should be located in the grounded leg. This is essential in systems operating at 750 V and above.

Usually, shunts are selected or designed to operate at a maximum continuous current of 2/3 of their rated current. However, a system for measuring intermittent or surge currents can tolerate a higher current without exceeding the above temperature constraints, so the duty cycle of the shunt will be a very important factor in the selection process. Taken in combination with the ambient temperature in which the shunt will be operating and the maximum temperature to be tolerated, this will determine what cooling techniques will be needed.

Finally, depending on the precision and repeatability needed in the application, ammeter shunt resistors may need to be traceable to standards and need to have a schedule of recalibration and recertification. This is commonly carried out annually.

Riedon offers competitively priced, standard precision current DC ammeter shunts rated from 5 A through to 1200 A, which provide 50 mV and 100 mV outputs. Its RS series provides a standard voltage tolerance of ±0.25% and a TCR of ±15 ppm/˚C; but the company can provide ±0.1% devices, alternative output voltages and other customizations within short lead-times.

Whether the application is in the traditional industrial or newer, emerging, renewable energy sectors, care should be taken when selecting an ammeter shunt resistor or specifying a tailored standard product or a fully-customized part. By selecting a well-established and experienced designer and manufacturer of shunt resistors, the process can be considerably simplified.