In portable electronic products, reducing power consumption to provide users with increased battery life is one of today's critical design considerations. The LCD (liquid crystal display) and its associated backlighting are among the more (and frequently the most) power-hungry loads in portable products. As a result, the use of an ALS (ambient light sensor) to optimize backlight LED operation under a variety of environmental lighting situations is increasing. At the same time, the preferred technology choices available to designers for sensing have shifted toward more integrated solutions.

How are ambient light sensors used?

Ambient light sensors are also called illuminance or illumination sensors, optical sensors, brightness sensors, or simply light sensors. One very important application for ALS technology is cell phones. Here, the ALS enables automatic control of display backlight brightness over a wide range of illumination conditions, from dark environments to direct sunlight. With ALS input, an MCU or baseband processor increases or decreases the display's brightness depending on the environment. This control dramatically improves visibility and reduces power consumption, since LCD backlighting can draw as much as 51 percent of the power in the input standby power mode. In addition, the ALS signal can be used to instruct the keypad LED driver to minimize keypad backlighting, reducing up to 30 percent of power consumed in the input standby power mode. In a bright environment, LED keypad brightness is reduced for minimal power consumption.

In addition to cell phones, ambient light sensors can be used in a variety of LCD-equipped portable products including PDAs, notebook PCs, digital cameras, video players, and GPS-based navigation systems. Any portable product with an LCD is a candidate for ALS technology to reduce power consumption. In automobiles, the use of LCDs is increasing for navigation, entertainment, and comfort systems, as well as control monitoring and dimming mirrors. Any product with an LCD that requires supplemental light for proper viewing can benefit from using an ALS to reduce power consumption and improve visibility under varying lighting conditions. This includes televisions and home appliances, especially those with increased electronic control and user-driven menus that require larger LCD panels.

The market research firm Databeans, Inc. estimates the current total available market for ambient light sensors to be seven percent of LED revenue, or roughly $327 million worldwide. According to Susie Inouye, research director and principal analyst at Databeans, "Due to the large number of feature-rich phone products that will drive demand, we expect this revenue to grow at a compound annual growth rate of 21 percent each year over the next five years to reach close to $860 million by 2014."

While CdS (cadmium sulfide) photoelectric cells have the advantage of a response similar to that of the human eye, they contain cadmium, a prohibited RoHS (Restriction of Hazardous Substances) material which makes them unusable in the consumer market. In order to reduce the environmental impact of electronic equipment waste, as of July 2006, any product containing RoHS-restricted materials cannot be sold into certain markets. 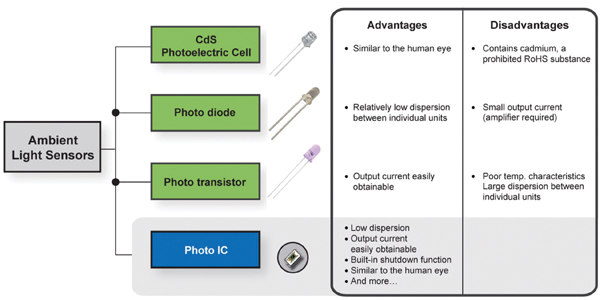 Photodiodes have a relatively low dispersion between individual units, but a low output requires an external amplification circuit.

Photo ICs, also referred to as ALS ICs, are the newest technology, developed to address the shortcomings of other ALS approaches. In addition to the increased functions that are possible with integration (including amplification, logic control, and shutdown capability), the photodiode sensing has a relatively low dispersion. Both analog and digital photo ICs are available. Each has advantages depending on the application. The photo IC has integrated functionality that eliminates the need for additional circuitry, which takes up more board space and adds cost. As a result, many designers are making the transition to photo ICs from discrete devices.

Both analog and digital ALS devices are silicon monolithic circuits with an integrated, light-sensitive, semiconductor photodiode (a PN junction that converts light into an electrical signal). Both technologies are available in small, surface-mount technology packages. Understanding the difference between analog and digital photo ICs is essential for selecting the proper ALS solution. 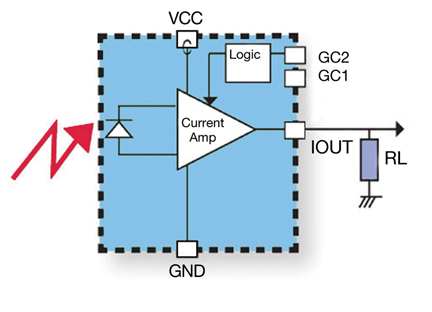 Figure 2: The typical analog ALS IC combines a photodiode with a current amplifier and control circuitry.

The analog ALS IC has an analog current output proportional to the incident light level. As shown in Figure 2, the IC combines the photodiode, signal amplification, and control logic. The current source output is typically converted to a voltage by means of a simple load resistor. This voltage output is typically applied to either the input of an ADC interface on an MCU (see Figure 3), or directly as an input to an LED driver IC equipped with auto-luminous control (see Figure 4). 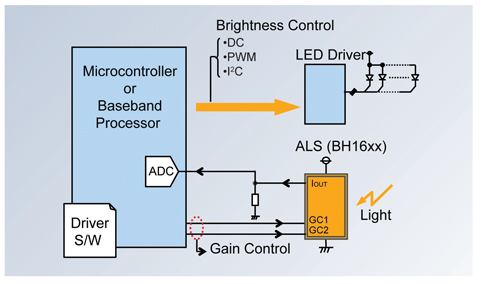 Figure 3: The output of the analog ALS provides the control input to the system MCU.

Fundamental design advantages of the analog ALS include an output current proportional to the brightness of the environment, and spectrum sensitivity similar to that of the human eye.

The typical digital output ALS (see Figure 5) has a 16-bit digital I²C output. In addition to amplification for the photodiode, the IC's integrated ADC converts the photosensor's output to an I²C signal for direct connection to the I²C communication bus of an MCU or baseband processor. Figure 6 shows how the I²C interface simplifies the circuitry in an application by removing the need for an external ADC.

The digital ALS includes more integration than an analog ALS and can result in an overall cost savings, as well as space savings, on the PCB (printed circuit board). 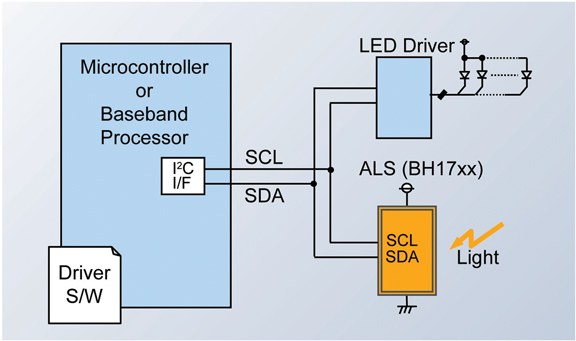 Figure 6: In the digital ALS application, the controller communicates directly with both the ALS and the LED driver using an I2C interface.

Selecting the right topology for the application

Deciding whether an analog or digital ALS is the most appropriate solution requires answering a few simple questions about the application.

In terms of power consumption, a digital ALS will likely draw more power in both the active mode (for example, 190 µA for the ROHM Semiconductor BH1750FVI) and power down mode (1.0 µA for the same digital ALS) due to the integration of the ADC when compared just to an analog ALS (97 µA and 0.4 µA, respectively for the ROHM Semiconductor BH1620FVC). However, the total power consumption may be comparable when a separate ADC + MCU or broadband controller is taken into account. In either case these values are quite low when compared to the power savings achieved by their ability to control the LED power consumption.

All ROHM ambient light sensors operate over a temperature range of -40 to 85°C to ensure stable operation under extreme conditions. Figure 7(b) shows that ROHM's photodiode output is very stable regardless of light source, providing both reduced power consumption and an improved user experience.

ROHM Semiconductor ALS ICs have an output current proportional to light (current sourcing) with a measurement range of 0 to 100,000+ lux (lx). These ICs feature light sensing accuracy of ±15 percent based on ROHM's unique laser trimming technology that also ensures high output sensitivity. Each of these devices features an input voltage supply range from 2.4 to ~5.5 V. A resistor connected to the output current (Iout) pin converts the current output to a linear voltage from 0 V up to the supply voltage level for highly efficient component operation. 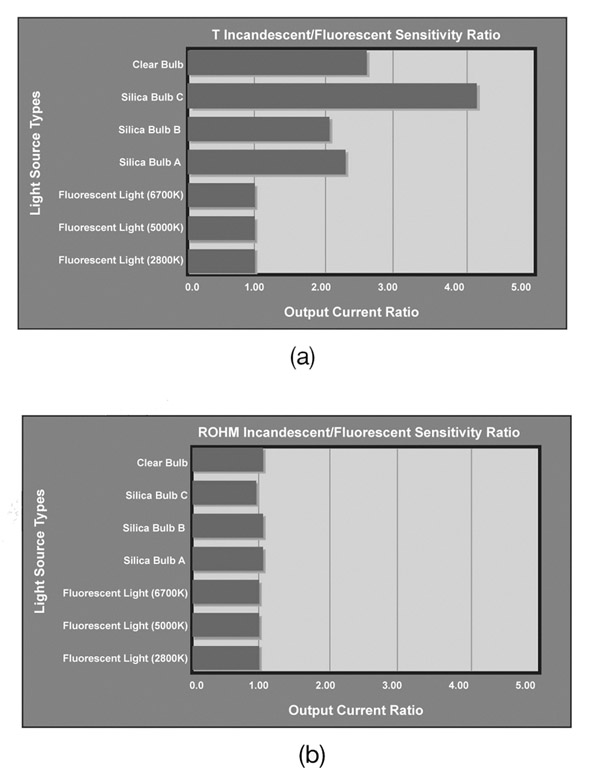 Figure 7: A competitor's sensor output (a) produces different values depending on the light source but ROHM's ALS ICs (b) deliver stable output regardless of light source.

Figure 8 shows the relative spectral response of the ROHM Semiconductor analog ALS and luminosity versus output current. Multiple photodiodes with different junction depths provide a stable output with little variation between various light sources. Since wavelengths outside of the range of human vision, such as ultraviolet and infrared, may cause inaccurate light sensor readings, it is important to choose a light sensor that has spectral sensitivity similar to that of the human eye. While the data in Figure 8(a) is specifically for an analog ALS, this same performance is inherent in the digital designs, as well. In addition to an Iout proportional to the luminosity in lux, ROHM's analog ALS products have selectable high-gain, medium-gain, and low-gain modes, a proprietary function. These gain control modes allow for direct control of the internal amplifier gain via the GC1 and GC2 input pins. As shown in Figure 9, these three gain modes provide designers even greater design options for trading off performance versus power consumption.

Figure 8: Spectral sensitivity (a) and luminosity versus IOUT (b) for the BH1603FVC demonstrate performance advantages that design engineers should consider when selecting an ALS.

A number of other features, described below, distinguish these digital photosensor ICs.

In the operating environment, it is important for a light sensor to generate a consistent output regardless of the light source. As shown in Figure 7(a), a competing solution outputs different values depending on the light source, which could cause the system to turn on the backlighting when it is not needed. This reduces battery life and potentially interferes with the end user's experience. 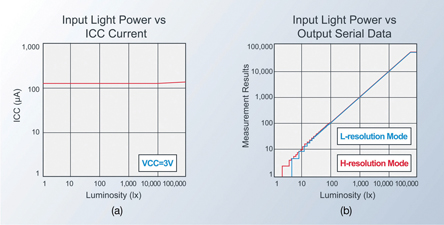 Figure 10: ICC current is independent of luminosity (a) for ROHM Semiconductor's digital ALS solutions as demonstrated by the performance of the BH1715FVC. At the same time, these units are compatible with a wide range of intensities (0 to ~65,535 lux) (b).

A comparison of the two resolution modes for improved lighting control is shown in Figure 11. The H-resolution mode has the highest resolution (1 lux increments) and is suitable for measuring very low lux levels, but it takes the longest time to measure a light sample. The advantage of operation in this mode is a higher accuracy light sample and superior optical noise rejection, since this capability improves with increased measurement time. Operation in H-Resolution mode eliminates optical noise at 50/60 Hz. An example of optical noise reduction with a fluctuating fluorescent light source output, demonstrating values stable within ±1 percent, is shown in Figure 12.

The L-Resolution mode samples in 4 lux increments and takes the shortest time to measure a light sample. Note that, in contrast to the analog ALS, different operating modes do not impact the power consumption in digital units.

Ambient light sensors are an important tool for enhancing performance in LED-backlighted LCD displays. ROHM offers both analog and digital units. In addition, ROHM offers design assistance in the form of ALS IC Evaluation Kits and optical simulation design support for all its ALS technologies.