An analysis of circuit board air flow measurement techniques and the considerations required to obtain an accurate reading in this complex environment.

Electronic circuit boards create some of the most complex and highly three dimensional fluid flows in both air and liquid. The combination of open channel (clearance to the next card above the components) and large protrusions (components, e.g., BGAs, PQFBs, etc.) creates varied pressure distributions that contribute to such flow complexities. These distributions include highly three-dimensional flows with all modes of fluid flow structures (laminar, turbulent, pulsating, unsteady, etc.) and significant flow reversals (Figure 1).

Figure 1: Visualization of water flow over an electronic board. The first component is twice the size of the others down-stream.

Figure 2 shows a Direct Numerical Simulation (DNS) of a PCB with straight and disked fin heatsinks. Note the complex flow structure with premature egress of the flow from the fin field in both types of heatsinks. 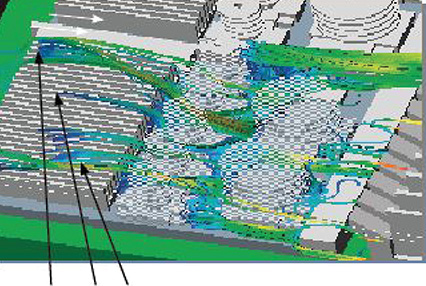 The complexity and unpredictability of these flows present problems when one needs to determine the temperature rise in a channel or a device’s junction temperature. Because most analysis tools fail to accurately predict such complex flows, direct measurements are often needed.

The role of fluid velocity

Fluid velocity has a significant role in maintaining or determining a component’s junction temperature.

Figure 3 shows the value of Rja as a function of the air velocity for a typical component.

Figure 3: Junction-to-ambient thermal resistance as a function of air velocity.

where Ta is the approach air temperature obtained from the change of enthalpy across the board, upstream of the component.

Where Q is the power dissipated on the board, upstream of the component of interest, Tamb is the temperature of free ambient, and ṁ is the mass flow rate defined by the following:

Where ρ is the air density, V is air velocity, and A is the cross-sectional area of the channel. CP is the specific heat at constant pressure.
Substituting equations 2 and 3 into 1 and solving for Tj,

Considering that the junction temperature, Tj, is the most important parameter in electronics cooling, Equation 4 clearly shows the role that fluid velocity plays in the magnitude of Tj.

There are numerous techniques for measuring fluid flow (liquid or gas).¹ The following methods are the most suitable for use in electronic systems:

LDV and PIV, though accurate, require line of sight to the measurement area and do not measure air temperature. They are not commonly used in electronics systems, although they are effective tools in a wind tunnel setting.

From the methods listed above, hot-wire anemometry (HWA) is by far the most suitable method for electronics cooling applications. Hot-wire anemometers are heat transfer elements. By maintaining the wire or bead temperature at a constant level (150-250ºC), one can correlate the rate of heat required to maintain the wire temperature constant to that of the air velocity passing across the sensor. Thus, to accurately measure the velocity, one must know the temperature of the air approaching the sensor, where the velocity sensor is, and the sensor temperature itself.

The governing equation for HWA is given by Equation 5,

Where Q is the power to the sensor supplied by the HWA electronics, Asensor is the surface area of the sensor, Tsensor and Tapproach are the Sensor and the Approach air temperatures, respectively, and, α and ß are deduced from the calibration of the HWA. Two points are noteworthy:

These technologies have some unique advantages. Yet, both also have design disadvantages that may affect measurement results. In single-sensor technology, there is a brief lag time between the temperature and velocity measurements during which the temperature might slightly change. While this difference, if any, is typically miniscule, the results are not based on perfectly simultaneous measurements.

There are four key possible sources of error in dual-sensor technology:

Dual sensors measure temperature and velocity at two different points. This can cause significant errors if the air flow is non-isothermal – which is the case with the air flow over most PCBs. Using Equation 5, the table below shows the magnitude of such errors:

Dual sensors feature the hot (velocity) and cold (temperature) elements working in close proximity. Radiation coupling between them causes the temperature sensor to report a Tapproach that is substantially larger than the actual. As a result, the measurement system will produce significant errors in air velocity magnitude.

By referring to Table 1, one can see what the error in velocity measurement will be as the result of radiation heat transfer to the temperature sensor.

3 – Lack of calibration at elevated temperature 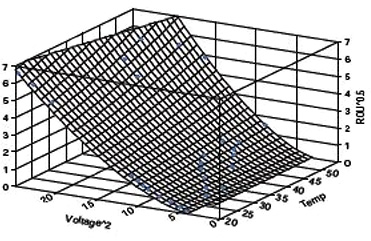 Figure 6: Required calibration surface including the effects of elevated temperatures.

4 – Size of sensor, and its support body

Good measurement practices mandate that the best sensor is the one that introduces the least disturbance in the flow field. As seen in Figure 7, large blocks alter the flow dramatically and cause errors in measurement. 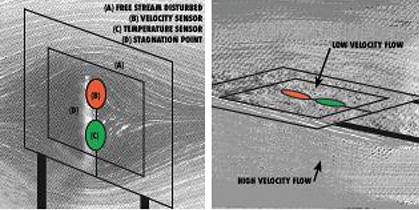 The following example shows the magnitude and impact that such sensors have on the final design or operation of a system.

Extreme temperature gradients are commonly observed in typical electronic cabinets. An improperly designed HWA can give false readings when used in these environments. Figures 8a and 8b show temperature and velocity distribution in a telecom cabinet, where: 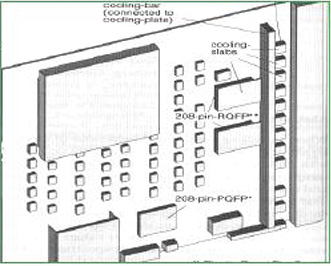 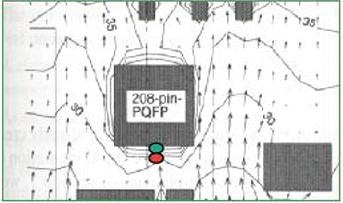 By using Equation 5 and the data from Figure 8b, had we used a dual sensor, the resulting velocity would have been 1.35 m/s versus 1 m/s. Subsequently, the device junction temperature would have been:

Examples like these show that accurate air flow measurement is an essential component of successful product design. Since device temperature impacts system life and is a direct function of air velocity, choosing a properly designed flow sensor will be instrumental in the success of the product in the market place.

This article first appeared in the Qpedia Thermal eNewsletter in September, 2010.