Wireless technology has permeated almost every product area in consumer electronics, with many developments in appliances, audio/video systems, health and fitness systems, and automotive electronics showcased at the 2012 International CES show.


Wireless technology has permeated almost every product area in consumer electronics, with many developments in appliances, audio/video systems, health and fitness systems, and automotive electronics showcased at the 2012 International CES show held this past January in Las Vegas. The popular wireless interfaces such as Wi-Fi, Bluetooth, ZigBee, Z-Wave, and NFC, were all well represented, but many new wireless developments were also demonstrated.

For example, the latest addition to the Wi-Fi collection of standards made its debut from Broadcom, which released a chip family that implements the high-speed 802.11ac specification that can deliver data at rates of over 1 Gbit/s. Multi-gigabit data rates using a Wi-Fi Direct connection were demonstrated by Wilocity using its WiGig chipset that implements the 60-GHz WiGig standard (802.11ad). There were also multiple low-power Bluetooth demonstrations of RF4CE, such as the µBlue series of Bluetooth low-energy ICs from Nordic Semiconductor.

The IEEE 802.11ac standard, also referred to as the fifth-generation of Wi-Fi (5G), includes the following features: Together, these features allow the chips to transfer data three times faster than the best 802.11n solutions (about 1.3 Gbits/s vs. 433 Mbits/s), and operate at power levels that are six times more efficient than 802.11n solutions. Although chip power consumption is higher than 802.11n solutions when the chips are active, the higher data throughput allows the chips to transfer data in a much shorter time period and then go into a standby mode. Thus the average power is much lower than an 802.11n solution. The beamforming feature helps steer content in the direction of the intended receiver, thus increasing reliability and extending the transmit range.

Broadcom has developed four versions of the chip to accommodate various system design needs (Figure 1). The BCM4360 supports a PCIe interface to the host and implements a three-stream wireless transfer for a maximum data rate of 1.3 Gbits/s. The BCM4352 and BCM43526 implement two wireless data streams for a maximum data transfer rate of 867 Mbits/s (the BCM4352 supports a PCIe interface, while the BCM43526 includes a USB interface). Lastly, the BCM43516 handles a single wireless stream for a data transfer rate of 433 Mbits/s and incorporates a USB interface. Chips with the PCIe interface are a good fit for applications such as access points, routers, DSL/cable gateways, and PC product. The USB versions are a better fit for applications such as consumer products (TVs, set-top boxes, and Blu-Ray players). 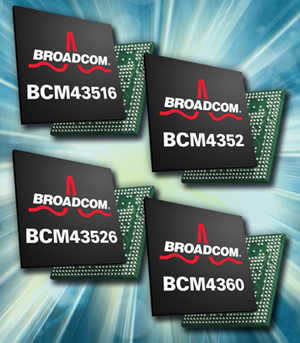 Products based on IEEE 802.11ac will be fully backward compatible with current Wi-Fi devices. Older devices, however, will not be able to take advantage of the improved speeds offered by IEEE 802.11ac. Home-networking products containing IEEE 802.11ac adapters are expected in the third quarter of 2012. However, at CES Buffalo Technology demonstrated a wireless router — the AirStation WZR-1750H — based on the Broadcom chip. Accompanying the 802.11ac technology within AirStation WZR-1750H is a 2.4-GHz 3 x 3 802.11n radio. The combination of the two delivers complete backward compatibility with 802.11a, 11b, 11g, and 11n, in addition to offering 2.4-GHz transmission speeds up to 450 Mbits/s and exceptional coverage.

The multi-gigabit chip developed by Wilocity for the WiGig 60-GHz standard, was demonstrated in a wireless link that drastically reduces the time needed for file transfers. The Wilocity solution incorporates a tri-band radio technology that delivers multi-gigabit data rates at 60 GHz, but also maintains compatibility with existing Wi-Fi products in the 2.4- and 5-GHz bands. The tri-band AR9004TB is a half-mini card that combines the Wilocity Chip (WIL6100) and the Atheros AR9462 to deliver multi-gigabit data for a wide range of applications from I/O to networking to video. Wilocity has also developed a bus extension technology that leverages the 60-GHz connectivity and can eliminate all cables (including video) from a mobile device to a remote platform called a DockingZone.

In addition to such updated products for existing standards, several new wireless communication standards were unveiled at CES. For example, a consortium of companies established several years ago demonstrated a wireless link called TransferJet, which is a close-proximity wireless technology that creates a simple link between two devices and has a physical layer transmission rate of 560 Mbits/s and a data throughput of 375 Mbits/s. Data transfers or media streaming can take place between two portable devices or between a portable device and a stationary PC, peripheral or TV that incorporates the TransferJet technology (Figure 2). 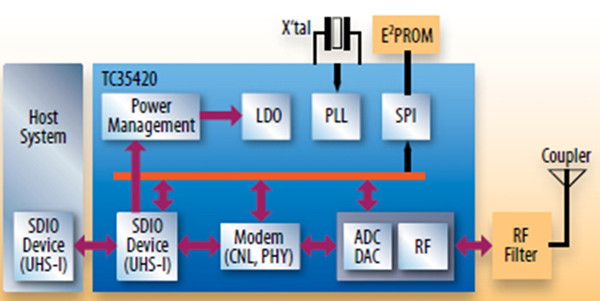 Figure 2: A complete system on a chip, the TC35420 from Toshiba combines the RF subsystem and the digital circuits to implement the TransferJet wireless data interface.

Bluetooth wireless technology is starting to make its way into many different computer and consumer products thanks to the development of the Bluetooth low energy standard and the RF4CE standards. The industry has already seen portable keyboards, mice, and speaker systems using Bluetooth, and now home TV remote controls and portable medical and fitness devices are starting to appear.

At the heart of these systems are ultra-low power Bluetooth chips such as the nRF24L family and the µBlue low-energy chip family developed by Nordic Semiconductor. The nRF24AP2 ANT chips employ the ANT RF software protocol developed by ANT Wireless. This protocol is the de facto standard for ultra-low-power wireless connectivity in sports and fitness equipment. Additionally, for Bluetooth low-energy applications, Nordic offers the nRF8001, which implements the Bluetooth V4.0+ wireless protocol. With peak currents as low as 12.5 mA and average currents down to 9 μA (for a 1-s connection interval), the nRF8001 enables battery lifetimes of months to years from a single coin cell. The nRF8001 is a fully qualified Bluetooth V4.0 low-energy design and combines the Radio, Link Layer, and Host into a single package (Figure 3). 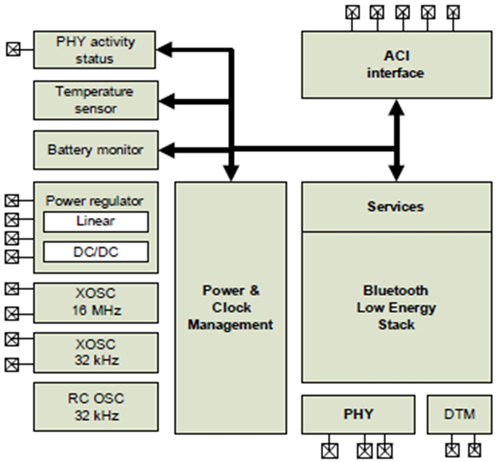 Figure 3: Able to stand by on just 9 µA and consume just 12.5 mA when active, the µBlue transceiver (nRF8001) from Nordic Semiconductor can run off a single coin cell for months to years, depending on the active duty cycle.

One emerging standard for wireless audio is being sponsored by the Wireless Speaker and Audio Association – an industry group dedicated to promoting the adoption of WiSA-enabled compliant products by fostering interoperability compliance testing between CE devices and high-performance wireless speakers. The association is focusing on the wireless transmission of high-definition (HD) surround-sound audio in the home theater environment by establishing the industry’s first interoperability specification and compliance testing programs for manufacturers of high-performance wireless speakers, DTVs, Blu-ray Disc players, and other consumer electronics (CE) devices.

WiSA audio avoids the popular digital audio frequencies used by Wi-Fi, Bluetooth, baby monitors, and microwave ovens. A set of frequencies have been opened up within the international unlicensed (U-NII) 5-GHz radio band that require dynamic frequency selection (DFS) procedures. These frequencies were historically reserved for weather and military radar applications, but have recently become available as long as conflicts with these important functions are avoided. A WiSA-compliant transmitter goes one step further and does its best to find a totally unoccupied channel. Further, it also looks ahead for another unoccupied channel, so in case of interference, it can jump directly to that channel without losing a single bit of audio information.