LED manufacturers Philips Lumileds, Osram, and Samsung have created a cost friendly mid-power LED that can be used for a variety of lighting applications.


Cost is one of the biggest drivers in the retrofit lighting market today. This is one of the many reasons why mid-power LED manufacturers are focused on helping designers simplify their designs and lower their total bill of materials (BOM). Many of the latest advances focus on getting the highest efficacy and quality of light in the smallest package possible. In some cases, LED manufacturers offer high-voltage versions that help save space, combine two LED chips in a single package to reduce LED count and cost, or supply different chip surfaces so designers can select the best LED for the application.

Engineers are always looking for ways to simplify their product designs, while reducing the overall system cost. This is what some of the latest mid-power LED designs address from Philips Lumileds, Osram Opto Semiconductors, and Samsung Electronics.

One of latest innovations in mid-power LED technology is the Philips Lumileds LUXEON 3535 2D (Figure 1). This LED offers up to 140 lumens per watt (lm/W) efficacy for cool white light at 4000K with a minimum coloring-rendering index (CRI) of 80. It also reduces LED count in retrofit lamps by 50 percent. The device combines two LED chips in the package to achieve the count reduction, reducing the cost of designing retrofit lights, as well as consumer downlights and diffuse industrial lamps. This means, for example, a 50 W PAR20 lamp can be designed with only four LEDs and a 40 W A19 lamp can be designed with only six LEDs, down from 14 LEDs, according to the company.

Figure 1: The Philips Lumileds LUXEON 3535 2D LEDs are available across the full CCT spectrum from 2700K to 6500K with a minimum CRI of 80. (Courtesy of Philips Lumileds)

The key benefit of using the high-voltage LEDs is that they use drivers containing fewer than 20 components on average compared to standard LED drivers that contain up to 50 components, according to Philips Lumileds. This translates into a lower total BOM cost while reducing the amount of inventory needed. 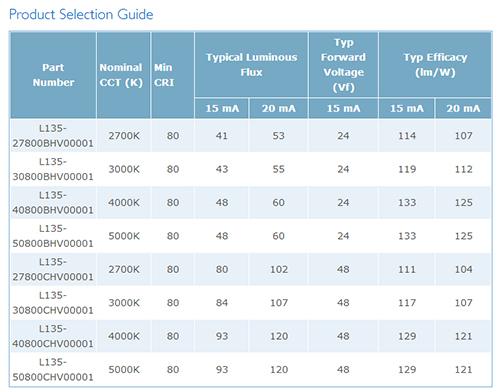 Also addressing cost and design issues in retrofits and downlight applications, the Duris S 5 compact, mid-power LED from Osram Opto Semiconductors delivers three different luminous flux and efficacy levels using one package and solder pad for linear and area indoor lighting. In addition, the LEDs offer a lifetime of more than 35,000 hours and can withstand higher temperature applications up to 105°C, which can translate into lower luminaire manufacturing costs. In addition to retrofits and downlights, these LEDs can be used in panel luminaires.

The Duris S 5 LEDs (Figure 3) feature a square 3 mm x 3 mm footprint and a small, round, light-emitting surface for a compact design, which means the light can be easily combined into secondary optics, such as lenses and reflectors. The LEDs are available across the CCT range from 2700K to 6500 (white) with a minimum 90 CRI (typical 97).

Initially launched in three versions with different chip surfaces and three different brightness levels, each Duris S 5 device addresses a different application. The first version addresses applications such as downlights and LED retrofits that call for a large amount of light that has to be emitted from a small area space. At 3000K and an 80 CRI, the LED offers a very high brightness of 97 lm and an efficacy of more than 100 lm/W at an operating current of 150 mA.

The second Duris S 5 version is designed for high efficacy, achieving 125 lm/W at 65 mA with 24 lm at 3000K. Target applications include panel luminaires and linear retrofits that call for low energy consumption and individual light points that should not be visible. A third version addresses all of these applications but at a slightly lower efficacy for optimal system costs. The device achieves an efficacy of 113 lm/W with a brightness of 28 lm at 3000K.

Delivering higher efficiency compared to its previous mid-power LED package, the new device offers reduced energy consumption and improved heat management, which translates into the use of smaller heatsinks and a more compact device, all contributing to a lower-cost design.

The LM561B family offers a wide range of color temperatures and is available in three brightness levels, while providing quarter binning for consistent color quality or brightness.

The LM561B also has completed 6,000 hours of LM-80 testing. Test results include TM-21 data that demonstrates an L70 of 93,000 hours under a 150 mA driving current at an operating temperature of 85°C. This means that the LM561B will maintain at least 70 percent of the initial light output for a minimum of 93,000 hours. This makes the LED light suitable for applications that require a high level of lumen maintenance.

In summary, to help drive further adoption of LEDs in luminaires and light fixtures, LED manufacturers are helping improve the cost structure by developing new mid-power LEDs that offer higher efficiency, advanced features, and more options. These improvements translate into lower cost by providing simpler designs, improved manufacturing processes, and a reduction in bill of materials.