In PMSMs, magnetic fields generated in succession in multiple stator windings spin a permanent-magnet rotor. By maintaining a 90° phase between the magnet field generated from each stator winding and the permanent magnet in the rotor, electronic-commutation control logic can achieve maximum torque in the motor. FOC, also known as vector control, provides a means to maintain this optimum phase relationship between stator and rotor by providing high torque even at low speeds and while responding quickly to dynamically changing loads, such as those in washing machines.

FOC continuously commutates the PMSM with sine waves to deliver high torque with little torque ripple. As a result, FOC-driven PMSMs run with reduced mechanical oscillations, outperforming trapezoidal or even sine-wave-driven brushless DC (BLDC) motors — resulting in quieter appliances. Furthermore, FOC-driven PMSMs are highly efficient, thanks to their use of permanent magnets, making them increasingly attractive as energy costs continue to climb — according to the U.S. Department of Energy, kitchen and laundry appliances account for about one-third of household electricity consumption. At the same time, the availability of sensorless methods for ascertaining rotor position further reduces component and lifecycle costs. This opens door to PMSM applications in more demanding compressor and pump designs, such as household, commercial, and automotive applications where sensors cannot easily be used.

The FOC algorithm delivers PMSM advantages by taking three-phase motor signals through a series of transforms designed to translate the three-phase, time-varying motor current measured at the stator into a much simpler two-phase, time-invariant, rotor-centric reference that can be more easily manipulated (see Figure 2). 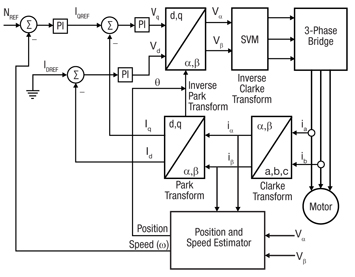 
In the initial input stage of the FOC algorithm, the MCU uses the Clarke transform to project the three-phase (IA, IB, IC) current vector to a two-phase (Iα,Iβ) vector space, which is still referenced to the stator. The MCU then applies the Park transform to rotate the stator-referenced Iα,Iβ vector by angle Φ to a new two-axes coordinate system with separate flux (Id) and torque (Iq) components aligned with the rotator. Since this new coordinate system remains fixed, with respect to the rotor, it is time-invariant in that reference plane.

The rotation angle Φ needed to align the stator field vector to the rotor coordinate system depends, of course, on the rotor position, which has traditionally been measured through sensors attached to the motor shaft. As mentioned above additional sensors increase BOM costs and degrade motor-system life span, motivating increased interest in sensorless approaches which calculate rotor position by leveraging its known relationship with back EMF. Unlike trapezoidal motors, however, back EMF in FOC designs must be estimated using virtual motor models because all phases are engaged in commutation. Consequently, sensorless FOC designs place additional processing load and require MCUs capable of rapidly returning results of trigonometric functions calculated through table lookup, floating-point arithmetic, or integer methods such as the CORDIC algorithm using barrel shifters.

By moving the three-phase, time-varying vector space to a two-axes time-invariant vector space, the FOC algorithm allows engineers to apply conventional proportional-integral-derivative (PID) controllers, used in dc motors, to calculate new target voltages Vd and Vq. In practice, the slow response time of motor speed changes means that D terms are often not needed in these controllers. Note that the use of a permanent magnet in the rotor means that there is no slip because the rotor flux produced by the rotor rotates at the same speed as the rotor field. Consequently, the reference flux IDREF illustrated in Figure 2 is zero; the torque reference Iqref is set through calibration to meet desired performance targets.

The MCU passes the output from the PI controllers through an Inverse Park Transform to translate the rotor-referenced Vd,Vq values to stator-referenced values. The MCU then passes these results through an Inverse Clarke Transform to produce the required three-phase voltage vector, which is then converted to pulse-width modulation (PWM) signals and delivered to a three-phase power stage that directly drives the PMSM.

This series of transforms and control functions presents a substantial processing load which is further exacerbated in sensorless designs. Sensorless FOC logic needs to include special initialization and start-up routines to account for lack of observable current measurement in a motor at rest (see Figure 3). FOC startup routines typically apply preset sine-wave patterns that run the motor up to sufficient speed needed for the MCU-based control system to switch to dynamic sensorless measurements. 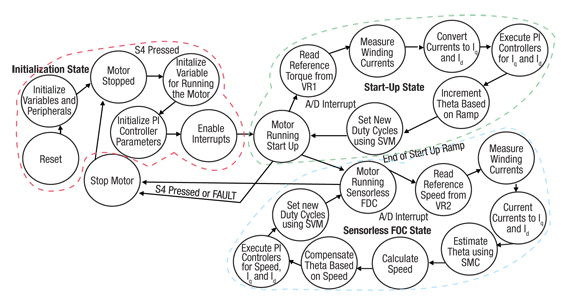