Sensor technologies from Freescale and Texas Instruments can be used in aircrafts to detect early failures by monitoring flight load, strain, temperature, and pressure data.


Active sensor systems are becoming an increasingly important element in aircraft design. Collating load, strain, temperature and pressure data can give a more detailed history of the state of different components in the aircraft and give early indications of problems. This article looks at the way different sensor technologies can be used in an aircraft for monitoring using sensor and conversion technology from Analog Devices, Freescale Semiconductor, Texas Instruments, TE Connectivity and Omron.

Sensor fusion is an increasingly important element is system design. Integrating multiple sensors with a microcontroller or microprocessor to handle more aspects of the system control at the sensor interface is improving reliability and accuracy while reducing power consumption. All of this is a positive move for the design of avionic sensor systems. This is already happening with sensor fusion of MEMS accelerometers and pressure sensors for inertial navigation, and can also be used to integrate more data from around the airframe. This provides more data for maintenance and control, reducing the overall costs of running the aircraft and allowing components to be replaced before they degrade.

A sensor fusion system can be built using devices such as the AD7476/AD7477/AD7478 from Analog Devices coupled with a microcontroller. These are 12-, 10-, and 8-bit, high speed, low power, successive approximation ADCs in six lead SOT23 packages for minimal weight and size. The parts operate from a single 2.35 V to 5.25 V power supply and feature throughput rates up to 1 MSPS. Each part contains a low noise, wide bandwidth track-and-hold amplifier that can handle input frequencies in excess of 6 MHz, making them suitable for sensors such as temperature and strain.

The conversion process and data acquisition are controlled using the serial clock, allowing the devices to interface with microprocessors or DSPs. The input signal is sampled on the falling edge of the clock and the conversion is initiated at this point. There are no pipeline delays associated with these parts.

The AD7476/AD7477/AD7478 (Figure 1) use advanced design techniques to achieve very-low power dissipation at high throughput rates, helping reduce weight for an avionics design. The reference for the parts is taken internally from VDD which allows the widest dynamic input range to the ADC so the analog input range for the parts is 0 V to VDD.

The conversion rate is determined by the serial clock, allowing the conversion time to be reduced through the serial clock speed increase. This allows the average power consumption to be reduced while not converting and reducing power and weight. The parts also feature a shutdown mode to maximize power efficiency at lower throughput rates. Current consumption is 1 μA maximum when in shutdown mode.

The parts use a standard successive-approximation ADC with accurate control of the sampling instant via an input and once-off conversion control. An external reference is not required for the ADC, nor is there a reference on-chip as this is derived from the power supply and thus provides the widest dynamic input range.

The AD7476/AD7477/AD7478 devices also feature a power-down option to save power between conversions. The power-down feature is implemented across the standard serial interface and helps reduce the weight of the system.

The ADC can be used to interface to a temperature sensor such as the LT73 that can be placed around the airframe to determine the temperature profile affecting individual systems. Similarly, strain gauges such as the 125UT can be placed at strategic points on the airframe. With sensor fusion, the data acquisition system can generate a profile of the strain on the airframe and monitor when the data falls outside the profile. This provides valuable information on the health of the aircraft. 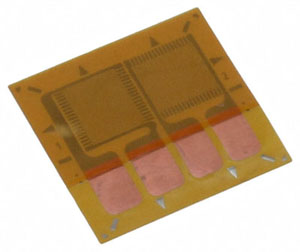 Figure 2: The 125UT strain gauge can be used as part of a sensor fusion monitoring system.

Combining this data with data from a vibration sensor such as the D7E gives even more information on the health of the aircraft and allows the sensor fusion algorithms to combine all the data for more accurate monitoring and prediction. These are implemented by a microcontroller or digital signal processor that can be linked directly to the ADC. Algorithms such as linear quadratic estimation (LQE), also known as the Kalman filter (see below), can be used to track measurements over time and provide useful feedback on the condition of the equipment.

The controller can also be used to monitor the condition of the sensor itself, avoiding false readings. The time-based algorithms such as Kalman filtering also allow the system to identify failing sensors rather than the system components being monitored.

The serial interface on the AD7476/AD7477/AD7478 allows the part to be directly connected to a range of different microprocessors that can then control the interface to the aircraft network and implement sensor fusion algorithms.

The serial interface on the TMS320C5x uses a continuous serial clock and frame synchronization signals to synchronize the data transfer operations with peripheral devices such as the AD7476/ AD7477/AD7478. The input allows easy interfacing between the TMS320C5x/C54x and the AD7476/AD7477/AD7478 without any glue logic required. In addition, the serial port of the TMS320C5x/C54x is set up to operate in burst mode with internal CLKX (Tx serial clock) and FSX (Tx frame sync).

The serial port control register (SPC) must have the following setup: FO = 0, FSM = 1, MCM = 1, and TXM = 1. The format bit, FO, can be set to 1 to set the word length to eight bits in order to implement the power-down mode on the ADC. For signal processing applications, it is imperative that the frame synchronization signal from the TMS320C5x/C54x provides equidistant sampling.

The ADSP-21xx family of DSPs is interfaced directly to the AD7476/AD7477/AD7478 without any glue logic required. To implement the power-down mode, SLEN is set to 0111 to issue an 8-bit SCLK burst. The ADSP-21xx has the TFS and RFS of the SPORT tied together, with TFS set as an output and RFS set as an input. The DSP operates in alternate framing mode and the SPORT control register is set up as described.

The timer registers are loaded with a value that provides an interrupt at the required sample interval. When an interrupt is received, a value is transmitted with TFS/DT (ADC control word). The TFS controls the RFS and, therefore, the reading of data. The frequency of the serial clock is set in the SCLKDIV register. When the instruction to transmit with TFS is given, such as, TX0 = AX0, the state of the SCLK is checked. The DSP waits until the SCLK has gone high, low, and high before transmission starts. If the timer and SCLK values are chosen such that the instruction to transmit occurs on or near the rising edge of SCLK, the data could be transmitted, or it could wait until the next clock edge.

The ADSP-2111 has a master clock frequency of 16 MHz. If the SCLKDIV register is loaded with the value 3, a SCLK of 2 MHz is obtained, and eight master clock periods elapse for every one SCLK period. If the timer registers are loaded with the value 803, 100.5 SCLKs occur between interrupts and, subsequently, between transmit instructions. This situation results in non-equidistant sampling as the transmit instruction is occurring on an SCLK edge. If the number of SCLKs between interrupts is a whole integer figure of N, equidistant sampling is implemented by the DSP.

The ADC can also be connected to the synchronous serial interface (SSI) of the DSP56xxx family of DSPs from Freescale Semiconductor. The SSI is operated in synchronous mode (SYN bit in CRB =1) with internally-generated word frame sync for both Tx and Rx (Bits FSL1 = 0 and FSL0 = 0 in CRB). Set the word length to sixteen by setting bits WL1 = 1 and WL0 = 0 in CRA.

To implement the power-down mode on the data converters, the word length can be changed to eight bits by setting bits WL1 = 0 and WL0 = 0 in CRA. Similarly for signal processing applications, the frame synchronization signal from the DSP56xxx has to provide equidistant sampling.

The controllers can then be used to implement the fusion algorithms and interface to a network. This can either be within the aircraft using a protocol such as ARINC or an external interface for maintenance. An ARINC429 transceiver interface, coupled with a companion ARINC Bus Interface Circuit, provides the data formatting and processor interface function. All logic inputs are TTL and CMOS compatible and three power supplies are necessary: V = +15 V ±10%, -V = -15 V ±10%, and V1 = 5 V ±5%. VREF is used to program the differential output voltage swing such that VOUT (DIFF) = ±2 VREF. Typically, VREF = V1 = 5 V ±5%, but a separate power supply may be used for VREF which should not exceed 6 V.

All of these factors are brought together in a MEMS inertial measurement unit (IMU) with 10-degrees-of-freedom (DoF). This implements an embedded sensor fusion algorithm that delivers extremely accurate orientation sensing in platform stabilization, navigation and instrumentation. The ADIS16480 (Figure 2) integrates a tri-axis gyroscope, tri-axis accelerometer, tri-axis magnetometer, a pressure sensor, and Analog Devices’ ADSP-BF512 Blackfin processor in a single package. 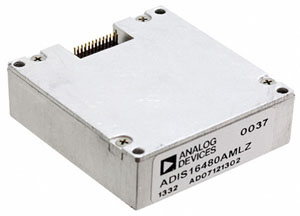 The ADIS16480 incorporates an extended Kalman filter (EKF) that fuses the sensor inputs over time to render exceptionally precise positioning while reducing design time and cost. This is particularly useful in systems that require real-time positioning, yet where movement is constant, complex and dynamic such as military and commercial aircraft navigation.

Kalman filtering is a mathematical algorithm that estimates the given state of a noisy, variable process by taking multiple measurements over time, and merging these with a predictive state estimator. The filter intelligently combines the MEMS IMU’s motion sensor inputs to deliver exceptionally precise positioning data, even under complex operating conditions characterized by constant, unpredictable movement. By embedding the filter in the Blackfin processor’s core, ADI also saves designers the time and cost associated with the intensive code development, testing and external processing required by other MEMS IMUs.

Figure 4: The block diagram of the ADIS16480 sensor fusion system.

When determining exact position or orientation, avionics electronics systems are dependent not only on the accuracy of individual sensors, but also on the sophistication of accurately and dynamically combining multiple inputs. The extended Kalman filter helps the system discern which sensors to ‘trust’ based on contextual awareness. This allows system-level designers to achieve positional accuracy under a variety of demanding environmental conditions by either letting the filter autonomously adjust, or by tuning the filter via its programmable interface.

The 330 MHz bandwidth supports closely aligned (0.05 degree) and phase-matched axes, and has an industry leading non-linearity of 0.01%. Every MEMS IMU is uniquely factory calibrated, which significantly reduces the time and risk associated with development and integration, as well as providing extremely-low sensitivity to thermal drift.

Using multiple sensors with a small, low-power data conversion device can provide the foundation of a data fusion system for avionics. This can be used to monitor the status of equipment and even the airframe using modern algorithms that can track performance over time. Using this data to predict maintenance schedules helps reduce the risk to degradation and improve performance, reducing overall costs. Modern low power, small data converters and sensors can provide this capability without significantly adding to the weight of the aircraft. The move to MEMS technologies for pressure sensing also helps improve reliability.