The Schottky bypass diodes used in most cell-based solar panels serve as a protection mechanism that allows the panel to continue producing power when one of its cell strings is shaded or damaged.


The Schottky bypass diodes used in most cell-based solar panels serve as a protection mechanism that allows the panel to continue producing power when one of its cell strings is shaded or damaged. However, the characteristics of traditional diodes create energy losses that reduce the overall efficiency of a solar power system and, in some situations, may actually cause costly damage. To solve this problem, several manufacturers have introduced a new class of “active diodes” that use transistors to produce diode-like behavior, while allowing the solar panels they protect to operate with higher efficiency and better reliability. This article will explore the technology that underlies active diodes, look at the products currently on the market, and look at how they are changing the way solar panels are being designed and manufactured. 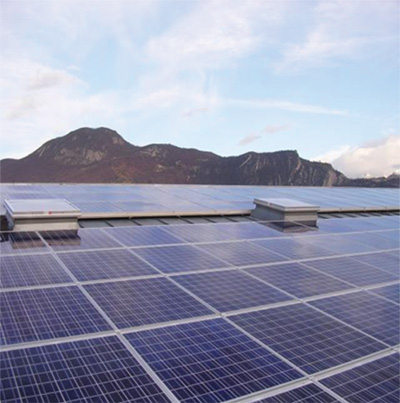 Figure 1: Solar arrays rely on bypass diodes to protect them from damage and minimize output power losses when a section of an individual panel or a larger part of the array experiences shading due to obstructions, clouds, snow, or other phenomena. (Courtesy of STMicroelectronics.)

To understand why bypass diodes are needed, let’s look at a typical solar power system. Each string in the system is typically comprised of 10 to 20 series-connected solar modules, each with 60 to 100+ (typically 72) cells that are, similarly, all connected in series. The result is a 1,000-odd cell string, with each cell attempting to produce current in direct proportion to the amount of sunlight it sees. If any of these cells become shaded, soiled or damaged, the entire string current is limited to that which the weakest link can support. Besides being susceptible to temporary performance losses when even a single cell is shaded, an array constructed using long-series strings can introduce other, more subtle problems into a solar-electric system.

A typical silicon cell has a forward voltage of 0.5 volts when optimally loaded, while thin-film processes such as CdTe or CIGS vary from 0.3 V to over 1 V. If, for some reason (such as shading), a cell cannot produce as much current as other nearby cells, then this same cell will now be forced into a reverse mode of operation where it is subjected to a negative voltage, which, depending on its position in the string, can be from 5 to 30 V. Although the cells are somewhat forgiving, if enough mismatch is present, the under-performing cell will be driven into the region of reverse breakdown. With 10 to 20 solar modules connected in series, the DC output of a modern solar system can easily be 400 V. Under these conditions, the shaded cell with 30 V applied across it may begin operating in reverse breakdown, with the functional cells in the rest of the string accounting for the remaining 370 V. In a typical system where string currents approach 10 A, a shaded cell is quickly transformed into a 300 W heating element, creating a hot spot that can easily damage the panel.

To prevent panel damage (and the occasional rooftop fire), solar manufacturers have traditionally arranged their panels into substrings of 12 to 24 cells, each with its own bypass path (Figure 2). The decision to use 12- to 24-cell groups is based on a comparison of the summation of the forward voltages versus the expected breakdown voltage of the weakest cell in the string. For example, in a group of 24 cells, each with a forward voltage of 0.5 V, an overall voltage of 12 V will be produced. To prevent a breakdown-induced “meltdown”, the bypass diode must be inserted at points that prevent the total number of diode drops that comprise the local loop’s voltage from exceeding an individual solar cell’s reverse breakdown threshold (usually 25 to 30 V). 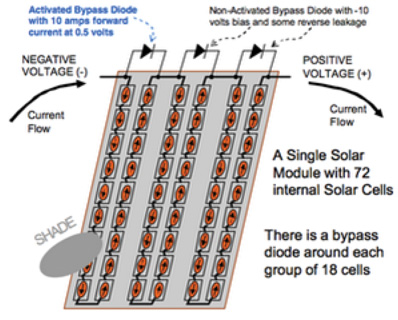 Figure 2: When one or more of a solar panel’s substrings of PV cells experiences shading, its bypass diodes protect prevent damage from over-voltage conditions and electrically-induced overheating while allowing the remainder of the string to operate normally. (Courtesy of Microsemi Corp.)

Bypass diodes also provide some protection against DC arcing, which, unlike the arcs produced by the AC voltages found in most wiring, will not self-extinguish. Arcing in AC systems often self-clears at the “zero-crossing” of the 50/60-Hz waveform, while a DC-generated arc must be interrupted by a protection device or physically moving the discharge points further apart. Bypass diodes can provide limited protection against “series” arcs within the module itself, because they limit the local arcing voltage to 10 to 20 V – a very important secondary feature.

The bypass devices on early solar panels were silicon P/N diodes. They had forward junction voltages of 0.7 to 1.0 V and breakdown voltages of 500 to 600 V. The heat produced by the P/N diode’s junction losses was acceptable at low amperages but, as cell efficiencies improved and larger wafers raised typical string currents, the industry was forced to adopt Schottky diodes. Their lower forward junction voltages (0.4 to 0.5 V) cut power dissipation in half, which helped solve the heating problems but introduced several other difficulties. For example, Schottky diodes have much higher leakage currents than an equivalent P/N device, a problem that gets worse as the device’s temperature increases.

Schottky diodes also have much lower reverse breakdown voltages, typically 40 to 60 V less than the 600 V ratings of comparable P/N devices. The diodes’ junctions are also more susceptible to permanent damage by relatively low levels of transient energy. A diode that fails “open” can leave the substring it protects vulnerable to a destructive “hot spot” event during the next occurrence of shading or soiling. If the diode fails in a “shorted” mode, it will (at a minimum) dramatically reduce the panel’s output power.

Several companies have recently introduced an alternative to Schottky diodes in the form of a new category of so-called “lossless”, or “active” diodes. In truth, they are actually two-terminal FET-based switching circuits, designed as pin-compatible replacements for conventional diodes. Several manufacturers offer active bypass diodes for solar applications including Microsemi, STMicroelectronics, and Texas Instruments. Regardless of who makes it, the main components of an active diode (Figure 3) include: 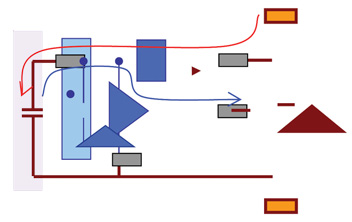 When the solar array is shaded, the active bypass device operates as follows:

Each manufacturer offers some combination of active diode elements in a multi-chip package, with the remainder as discrete external components. Microsemi's LX2400 IDEALSolar Bypass devices come in an LGA package that houses all the components required for an active bypass diode, as well as a lightning survivability circuit that provides a bi-directional, low-impedance path that lowers its power dissipation during a lightning strike.

As with nearly any new technology, active bypass diodes have a price disadvantage against the mature technology they are displacing. The first generation of active diodes cost roughly 2X to 3X what manufacturers pay for high-quality Schottky diodes. However, the prices of some active devices has declined by 10 to 20 percent over the past year, and smart designers are beginning to understand that the devices can offer significant dividends in terms of overall solution cost and added capabilities that repay their higher cost several times over.

The most obvious advantage active bypass diodes offer is dramatically lower losses in both their bypass and “off” modes. A typical device has a 40 to 50 mV forward voltage versus the Schottky’s 0.4 V, which translates into roughly a 10X reduction in power dissipation when running in bypass mode. This improves an array’s ability to operate efficiently when one or more panels in its string are subject to shading conditions (caused by neighboring buildings, trees, chimneys, etc.).

When the active bypass diodes of the strings in the affected modules operate in forward (bypass) mode, they produce roughly 80 percent less than an equivalent Schottky diode (Figure 5). When a PV array using active bypass devices experiences 10 percent shading (not uncommon in residential/commercial systems), it will produce up to 0.5 percent more energy than a system using conventional devices. Their low-leakage characteristics also provide a small, but measurable improvement in energy production during normal operations. Their reverse leakage current is roughly 0.3 µA (versus up to 100 µA for Schottky diodes), which adds roughly 0.01 percent to a typical system’s overall energy gain.

Figure 5: Power dissipation of a Schottky diode and an active diode in a junction box at 85°C ambient (per diode). (Courtesy of Texas Instruments.)

Active diodes’ reduced heat dissipation pays much bigger dividends by allowing the use of simpler, smaller heatsinks which can be housed in simpler, more compact junction boxes that cost less to manufacture. Their compact form factor and reduced cooling demands may even allow designers to mount the diodes directly on the solar panel’s bus bar, eliminating the need for a junction box and its associated wiring. This configuration could cut as much as $10 to $15 from a panel’s total system cost, savings that would repay the active diodes’ added price several times over. Similar savings can be realized by integrating the cool-running devices directly into the per-panel micro-inverters and optimizer boxes that are being offered by some manufacturers.

These devices may also be essential for new bypass architectures that support the emerging requirements for incorporating monitoring and safety shutdown capabilities into the solar panel itself. The genesis of these requirements is in part a report from Underwriters Laboratories Inc., titled “Firefighter Safety and Photovoltaic Installations Research Project,“2 which, among other issues, documented how water on a damaged solar array creates a potential danger zone with a radius of up to 20 ft. (and up to 1,000 ft. if the water contains salt). This research also concluded that turning off an array is not as simple as opening a disconnect switch. As long as the array is illuminated, parts of the array will always be energized, therefore generating lethal DC voltages. This and other studies are driving a new safety standard that will require solar panels used in some applications, such as utility-scale solar farms, to provide an electronic interlock that can be used to “kill” each panel’s output remotely. Since the bypass diode is already located within the solar string, the addition of a control input that could use the device’s power FET to disable the panel would provide the required safety mechanism at a minimal increase in cost.

The same low power and compact form factors have also aroused manufacturers’ interest in integrating them into the panel itself. At present, no commercial products are available that laminate the diodes onto the same backing that holds their PV cells. However, STMicro has experimented with on-panel diodes for some time, and has developed a PQFN package option for some members of the SPV100x family which boast a 0.75 mm thickness with the goal of making the lamination process easier and smoother (Figure 6). Integrated diodes also eliminate the added cost and failure points created by external wiring, making it increasingly feasible to use more diodes per panel, allowing the remaining substrings to continue producing power in partial shading conditions. 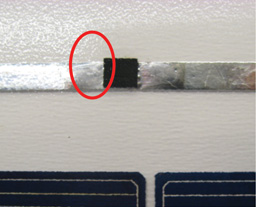 Figure 6: Active diodes’ low power dissipation and compact form factor makes it possible to mount them directly onto the solar panel substrate, eliminating the need for a junction box. (Courtesy of STMicroelectronics.)