Sensing devices for real-time impact monitoring make it possible to see what is really happening when collisions occur on the football field.

In a typical football game, whether it is a Junior Varsity or an NFL game, we get to see bodies crashing into each other on the field at high velocities. Because of this, medical studies are finding that silent injuries—brain trauma in particular—may occur, resulting in long-term cognitive problems and other debilitating conditions affecting players later in life. The number of concussions received in the high-impact game is increasingly the fodder of news headlines. And, given the outcry of parents and of former players, developments are under way to mitigate injuries by identifying when a serious event has occurred.

Somewhat similar to shaken-baby syndrome, when football helmets collide in play a player’s brain continues to crash into the skull’s interior, accounting for untold potential damage. The NFL has acknowledged this situation to some degree and has already settled lawsuits with more than 4,000 former players for negligence in addressing head injuries accumulated during the course of their careers.

Amazingly, the protective helmet industry has, until recently, been slower than one would expect in implementing greater protection, often citing flawed test results that indicate only whether the helmet prevents skull fractures as opposed to scrambled brains. This attitude, however, is finally changing as a number of sensor manufacturers and sports companies begin to tackle the issue head on.

Impact sensors to the rescue

Impact sensors, or accelerometers, are small, highly sophisticated sensors that measure in real time the force and even the number of impacts that players sustain. Data collected is sent wirelessly via Bluetooth to a dedicated monitor on the sidelines, while the impact prompts a visual light or audio alert to signal players, coaches, officials, and the training or medical staff of the team.

These sensors are finding their way onto the field for real-time impact monitoring. The number of high schools and colleges that rely on impact-sensor data is growing and more are expected to join their ranks, especially since the recent showing of a TV documentary, “The Smartest Team: Making High School Football Safer.”1

One such sensor example is the ADXL377 from Analog Devices (Figure 1), a small, thin and low-power 3-axis accelerometer that measures acceleration from motion, shock, or vibration. It features a full-scale range of ±200 g, which would encompass the full range of impact acceleration in sports, which typically does not exceed 150 g’s.  Specifically designed for concussion and head-trauma detection, at 3 mm × 3 mm × 1.45 mm, the device is small enough to be designed into a helmet. Sensitivity, listed at 6.5 mV/g with -3 dB bandwidth at 1.6 kHz, is sufficiently high for the application.

When a post-impact player is removed from a game and not allowed to return until cleared by a concussion-savvy healthcare professional, most will recover quickly. If the injury is undetected, however, and an athlete continues playing, concussion recovery often takes much longer. In addition, the industry is finding that long-term problems from delayed or unidentified injury can include:

Impact sensors do not diagnose concussion, nor are they designed to make any type of recommendation about whether a player could or should return to play. They merely identify an event that demands a further look by qualified personnel as well as continued monitoring.

The Measurement Specialties Model 3038 accelerometer (Figure 2) is also designed for high-performance applications, including impact testing, vibration, and shock monitoring, and it is suitable for harsh environments. The device features a dynamic range of ±50 g to ±6000 g, low-power consumption, and 5000 Hz bandwidth. 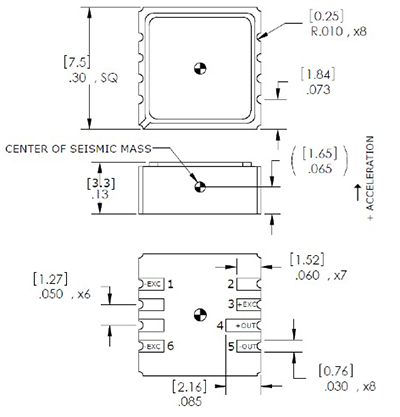 Similarly, the STMicroelectronics H3LIS331 (Figure 3) is a MEMS motion sensor, a low-power, high-g, 3-axis digital accelerometer that measures very high accelerations along all three axes with ultra-low current consumption. It provides for precise shock detection, up to 400 g² in space- and power-constrained applications including sports equipment. The accelerometer delivers three-dimensional precision and is optimized for battery-operated applications, expanding the possibilities for concussion monitoring in high-impact sports.

It has dynamically user-selectable full scales of ±100 g/±200 g/±400 g and is capable of measuring accelerations with output data rates from 0.5 Hz to 1 kHz. It is available in a small, thin, plastic, land-grid array package (LGA).

The sensors’ most important role is to alert to dangerous concussions. Yet, the act of real-time monitoring brings these players to the attention of their coaches not only to monitor serious impacts but, based on the data provided by the sensors, also help to modify a player’s technique so that they are not, for example, keeping their head low where they can sustain injury to the front and top of the skull. In the NFL there also has been an aggressive crackdown against hits to the head and neck—a response to the ongoing concussion crisis—resulting in immediate penalty to players using their helmets as a “weapon”.

Not only are the sensors finding their way into helmets, but customized mouthguards also are helping  A customized mouthguard has tested to be 99 percent accurate in predicting serious brain injury after near-concussive force, according to an Academy of General Dentistry study2. Teeth absorb and scatter infrared light, which shows how much force is taking place at the moment of impact.

Sports equipment companies are getting in on the research and development as well. Reebok and MC10 jointly created the Checklight—a sensor-laden skullcap that relies on an accelerometer and a gyroscope to detect and measure the force of an impact. Suitable for ice hockey as well as football, the device is a black skullcap with an electronic strip and three lights on the back. It blinks green when a player has not sustained a head impact on the ice or field, yellow after a moderate impact, and red after a severe one.

Published tear downs of the Reebok Checklight found that it contains an STMicroelectronics 3G4200D three-axis MEMS gyroscope. The part includes a sensing element and an IC interface capable of providing the measured angular rate to the external world through a digital interface (I2C/SPI).

Tested with junior high school players during a playing season, the Checklight lit up after a hit to one player that did not seem that hard. After he was pulled from the game because of the light alarm, he exhibited concussion symptoms. This is a kid that would not have ordinarily been taken out of the game when the injury first occurred as it did not seem that severe.  That’s part of the problem—research suggests that sports-related head impacts can cause changes in the brain even when there are no signs of a concussion. Indications also show that there are measurable brain changes after just one season of play—even if no concussion has occurred.

Ultimately, the outcry for better protection for our young people as well as for professional athletes is being heard. Improved helmets, sensors, studies, and ongoing research is yielding the ability to recognize when injuries have occurred. While concussions cannot be prevented, active fine-tuned monitoring is already going a long way toward keeping players safe—and sensors are a big part of the solution.