This article explains how IMC current sensors are designed, how they perform, and how they are applied in these applications.


Integrated Magnetic Concentrator (IMC) Hall effect sensors are particularly appropriate for battery current monitoring, solar power inverters, and power inverters that drive traction motors in hybrid electric and electric vehicles. This article explains how IMC current sensors are designed, how they perform, and how they are applied in these applications.

Unlike coils in CTs (current transformers), which measure the time-derivative of the magnetic flux, Hall effect sensors yield a signal proportional to the flux density itself. This makes the measurement of both DC and AC current practical.

These novel, contactless current sensors consist of an integrated CMOS Hall effect sensor covered by an additional thin, ferromagnetic layer on its surface. This IMC layer acts as a magnetic flux concentrator, providing a high magnetic gain that increases the sensor's signal-to-noise ratio. The sensor is particularly appropriate for DC and AC current measurement. Such measurements are characterized by the need for ohmic isolation, very low insertion loss, fast response, small package size, and low assembly costs. Typically, current sensors are found in applications such as battery current monitoring, solar power inverters, and power inverters that drive traction motors in EVs (electric vehicles), and HEVs (hybrid electric vehicles). There is no upper limit to the level of measurable current of IMC sensors, since their output level depends only on the conductor's size and its distance from the sensor.

Some key features of this current sensor include sensitivity to magnetic fields parallel to the chip's surface, linear output voltage proportional to the magnetic field, zero power loss in primary circuits, very high sensitivity, excellent nonlinearity, wide band (DC to 100 kHz), low offset and offset drift, very low noise, and isolation from the current conductor. All this is housed in a compact, surface mount SOIC-8 package. In essence, it produces an analog, linear, ratiometric output voltage that is proportional to the applied magnetic field parallel to the chip's surface.

Practically, the current sensor IC is fabricated using a standard CMOS process. The ferromagnetic layer (the IMC) is added in a simple post-processing step. This layer amplifies the magnetic field and concentrates it on the Hall elements. Consequently, the IMC Hall effect sensor features very high magnetic sensitivity, low offset, and low noise in a compact, cost-efficient package.

Figure 1: Left: The IMC Hall effect ASIC with integrated magnetic concentrators is sensitive to a magnetic field parallel to its surface. Right: Top view photograph of the current sensor ASIC with the two integrated magnetic concentrators, each about 800 µm long. The Hall elements are positioned underneath the gap in the center. The total size of the die is about 1.8 mm x 1.8 mm.

The IMC Hall effect sensor is packaged in a standard plastic SOIC-8 package so it can be mounted onto a PCB (printed circuit board) using standard pick-and-place machines and soldered using conventional soldering techniques. The measured current is sent either directly through a current track of the PCB located under the sensor (see Figure 2, left), or the sensor is mounted at a given distance from a larger current conductor (see Figure 2, right).

Figure 2: The current sensor is packaged in a standard SOIC-8 plastic package. Current range is defined by the geometry of the current conductor.

In both configurations, the magnetic flux around the current conductor enters the sensor on the outside of one octagonal IMC element, passes through the Hall elements under the gap and exits through the other octagon on the opposite side. Since the material used for the IMCs has a very high permeability, the concentrator collects all of the flux lines in its vicinity and focuses them on the Hall elements where the flux density is increased by a factor of about six.

To demonstrate its usefulness in a variety of applications, a few examples are illustrated. Figure 3 shows a current sensor constructed for an HEV inverter application with a current range of 200 A. The sensor was placed in an inverter driving a three-phase traction motor of an HEV (see Figure 4). 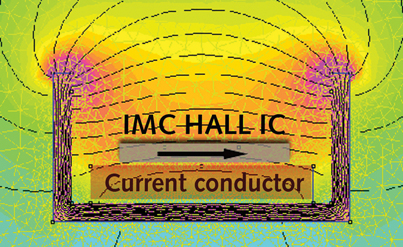 Figure 3: Current sensor based on an IMC Hall effect IC, a copper conductor and a ferromagnetic shield. Conductor cross-section is 12 mm x 2 mm including a soft magnetic shield based on Si-Fe or Ni-Fe.

The current sensor module's sensitivity measures 10 mV/A, and yields an output voltage of +/-2 V for +/-200 A. It also exhibits a response time of "8µ seconds", and <0.3 percent linearity over the full current range (see Figure 5). 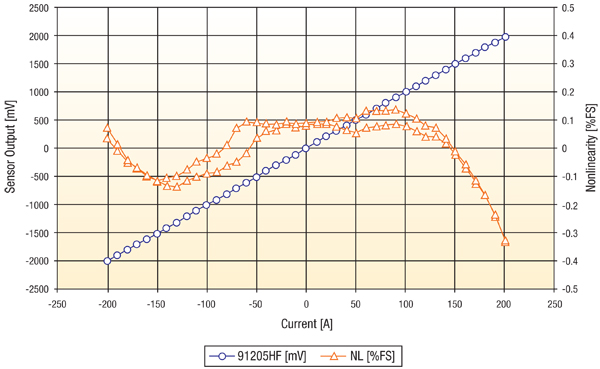 The IMC Hall effect current sensor ICs typically operate in ranges from a few amps to 1000 A. They also have very high bandwidths (see Figure 6) ranging from DC to 100 kHz, fast response times, and a resolution of >0.1 percent of the full-scale range. 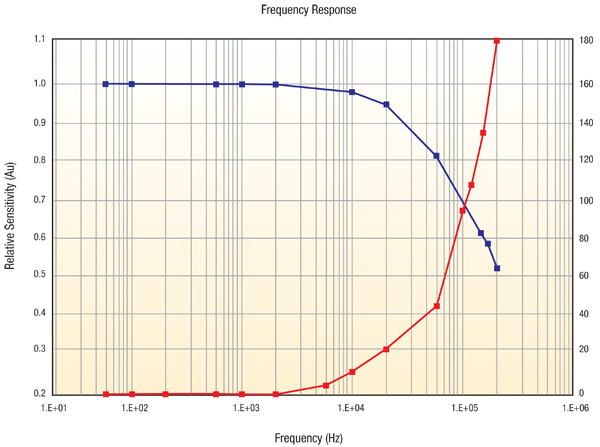 The sensor's current range is only limited by the geometry of the conductor and the shield. The current range may be easily amplified by increasing either the cross-section of the bus bar, or the distance between the sensor and the current conductor. In essence, it is designed to monitor currents from 5 A to 100 A on PCBs, or currents of up to 1000 A on bus bars.

Concurrently, demand for clean energy sources is growing rapidly worldwide. As a result, production of photovoltaic solar cells has expanded dramatically. For these applications, the efficiency of each and every photovoltaic cell in the array is important in order to compete with the cost of electricity generated by fossil fuels. Hence, the current and voltage of every panel used in this application is precisely monitored to optimize energy transfer. By precisely measuring the current in these applications, the current sensor ensures that efficiency of the solar power converters is optimal at all times and under all conditions. The focus here is on improving photovoltaic cell efficiency, which makes a significant difference in the product's success in the marketplace. In solar power converters, which require smaller currents, the sensor directly monitors the current flowing within a PCB track, as shown in Figure 7.

Similarly, current sensors are used in motor control systems to adjust the torque and improve reliability by detecting fault conditions, protecting the motor. Motor current control applications include cooling fans and water pump motors. Some intelligence may also be included with current monitoring to help protect against trapping.

Likewise, current monitoring can also be used to optimize the efficiency in power supplies. Once the power information is available inside the power supply unit, it can be used for real-time control of output voltages and currents. For instance, in systems like data storage, servers, and telecommunication equipment, current sensors can be used to control power consumption and optimize performance by adapting the load behavior to minimize power dissipation and maximize efficiency.

Such techniques are becoming attractive for DC-DC and AC-DC power converters used in data centers, where power consumption has become the most critical cost factor in the data center's budget. As energy prices continue to climb upward worldwide, and the pressure to cut energy wastage mounts, there is increasing pressure on these facilities to use electrical power more efficiently. Major sources of inefficiency in these applications are DC power supplies, which are typically only about 70 percent efficient. Google requires 90 percent efficiency from its data centers. The extra cost of this higher efficiency is easily compensated for by the reduced power consumption over the power supply's lifetime. As a result, IMC current sensors are becoming attractive in these applications to monitor current and reduce wastage.

Another application that can benefit from the IMC Hall effect current sensor is the smart grid. By monitoring the current and power usage inside homes via smart meters, homeowners can significantly cut energy wastage and save money, in addition to fighting global warming by reducing power consumption. Studies show that access to information about a household's energy usage is likely to result in savings of between 5 and 15 percent per month.

Google, in fact, is committed to the cause of giving people access to personal energy information so that they can make smart energy choices. For this purpose, the search engine giant is developing a meter called the Google PowerMeter, which will show consumers their electricity consumption in near real-time via a secure iGoogle Gadget. The Google PowerMeter receives information from utility smart meters and energy management devices, providing customers with access to their home electricity consumption right on their personal iGoogle homepage. Today, CTs are usually used in this application. However, the IMC Hall effect current sensor is an attractive alternative because of its small SOIC-8 package, wide current sensing ranges, very high bandwidths, rapid response times, and resolution of >0.1 percent of the full-scale range.

The newest member of the Triaxis sensor family, the MLX91206, is fully user-programmable. As a result, this IMC Hall effect sensor offers an additional benefit: it can be calibrated in situ after the sensor is fixed with respect to the current conductor. This way, the user can set a pre-determined, custom calibrated current sensitivity to meet the specifications required by a particular application.

In summary, contactless current sensors are constructed in a manner which imparts unique and useful performance characteristics. These sensors provide a compact, robust, flexible, and economical solution for applications such as battery current monitoring, renewable power conversion, motor control inverters for HEVs, load management, and over-current fault protection. They are designed to offer current monitoring from 5 to 100 A on PCBs, and up to 1000 A on bus bars.