It is estimated by the International Energy Agency that more than 19 percent of electrical energy demand globally is used for lighting. As a result, there has been significant effort around the globe in replacing inefficient incandescent light sources with higher efficiency solutions.

Much of the focus in curbing the electrical energy demand at the consumer level has been in programs to drive adoption of compact fluorescent lamps (CFL). The choice of using CFLs is not without consequence; each bulb contains mercury which, when not disposed of properly, ends up in landfills. Moreover, the form factor is not ideal for all lighting applications. An alternative, which has been gaining significant attention, is phosphor converted “white” LEDs. LED lumen output and efficacy — the measure of lumen output versus input power — continues to make significant progress year over year while, at the same time, the cost in terms of lumen/$ is falling. Beyond energy savings, high brightness LEDs can have lifetimes of greater than 50,000 hours when properly designed and operated, which eliminates the cost of replacing bulbs.

An off-the-shelf halogen desk lamp was used as the basis for a demonstration of the real world performance of today’s latest production LED light sources. A Cree XLAMP® MC-E LED was used as the light source. This product incorporates four LEDs in a single compact package, which is ideal for directed light applications such as MR-16 and portable task lamps. The original lamp was characterized before and after modification to highlight the real world performance differences. 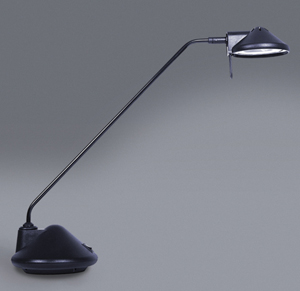 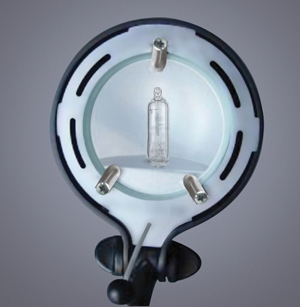 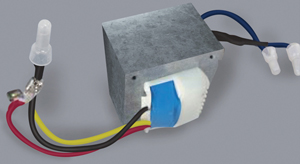 
The DoE ENERGY STAR Standard for Solid State Lighting Luminaires (Version 1.1 — 12/19/08) includes requirements for a minimum power factor (PF) of 0.7 for portable residential desk lamps. Typical LED drivers at this power level normally have a PF of 0.5-0.6 that falls below the requirements. The solution presented here has been specifically designed to exceed the residential ENERGY STAR® PF requirements without the addition of extra circuitry.

Halogen incandescent bulbs typically operate at temperatures in excess of 250-350ºC, and consequently, luminaries must provide safeguards for users. In this case, a glass cover plate restricts access to the bulb to protect the user, and a plastic shell provides a thermal shield above the bulb. Even with these safeguards, this halogen luminaire includes a handle on the end of a rod, allowing the user to safely aim the light. The glass is special, as it incorporates a filter to reduce unwanted UV light generated by the halogen bulb. A typical 12-volt halogen bulb used in these desk lamps can have efficacies ranging from 14 to 18 lm/W. Note as illustrated in Figure 3, this is only the rated efficacy of the bulb and does not include fixture losses or the losses from the transformer that is located at the base of the lamp.

High brightness LEDs display significantly higher light conversion efficiency and therefore produce less waste heat for a given light output. Less waste heat means the lamp assembly operates much cooler and does not expose the user to dangerous high temperatures. The bulb assembly was redesigned with a heat sink (Figure 4) that fits within the existing plastic housing of the bulb fixture. The cast aluminum insert shown below was installed in the lamp shell. A neutral white Cree MCE (code — 000-KE5 — 4000 K) was mounted on a metal core PCB sub-mount to aid in assembly. LED performance was evaluated with and without secondary optics. This LED was selected to meet the ENERGY STAR correlated color temperature (CCT) requirement and had ample flux to far exceed the minimum requirement of 200 lumens out of the luminaire for the SSL Residential Desk Lamp requirement. The LED is rated for 370 to 430 lumens at a test current of 350 mA and at 25°C. Taking into account the actual drive current (630mA) and the steady state operating temperature, the estimated lumen output from the LED is in the range of 450 to 600 lumens dependent on the heat sink design. The secondary optic is an off-the-shelf 32 degree reflector (FRC-M1-MCE-0R) from FRAEN that is specifically designed for the MC-E. 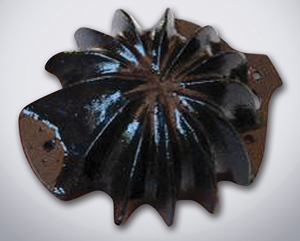 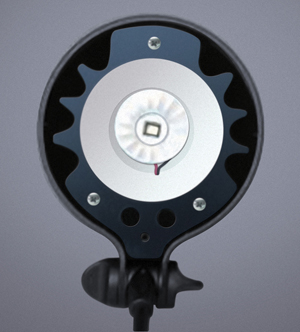 Figure 5: Cree MC-E mounted on sub-mount and connected to heatsink. 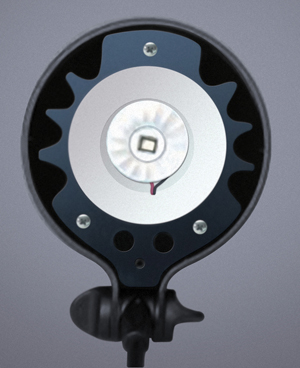 
The LED assembly is powered with an ON Semiconductor NCP1014LEDGTGEVB LED driver evaluation board. This high efficiency driver provides the required galvanic isolation and regulated drive current to power the LED array. It features a universal input power range from 90 to 265 VAC, which allows one design to be used in multiple regions with only a cabling change for the wall plug. This is not the case with the existing halogen iron-core transformer, as it is designed specifically for one range of line voltage. 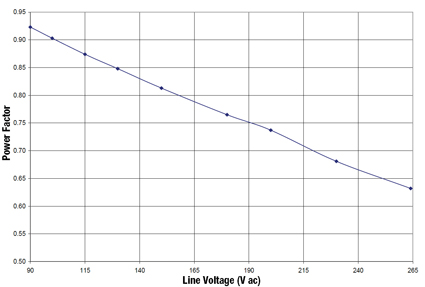 
The evaluation board supports the use of a potentiometer for variable dimming with a current adjustment range of 100 to 630 mA. The 630 mA maximum current was set to stay safely below the 700 mA maximum operating current of the Cree MC-E. Figure 6 illustrates a typical curve of the NCP1014LEDGTGEVB LED driver power factor correction performance as a function in input line voltage. As illustrated, for the US line voltage range, the power factor is well above 0.8, which far exceeds the ENERGY STAR Residential SSL Luminaire requirement of 0.7. The driver also meets the harmonic content requirements of IEC61000-3-2 Class C.

Shown in Figure 7 is the LED driver board mounted in the base of the desk lamp. Note that a ballast weight was required to stabilize the lamp since the original transformer, which provided a counterbalance, was removed from the base. In a portable desk lamp design optimized specifically for LEDs, the base would be wider and flatter to stabilize the lamp assembly without the need for added weight. Figure 8 illustrates the LED driver demo board mounted in a display case with no counterweight needed to support the head.

Data shown in Table 1 was collected on the desk lamp with the original 50-watt halogen bulb and a replacement 35-watt halogen bulb. Additional measurements made after conversion to the LED source are shown with and without an additional optical reflector that redirects stray light to a more central location. Illuminance expressed in lux is the measurement of luminous intensity on a surface at a distance of 0.5 meters from the light source. 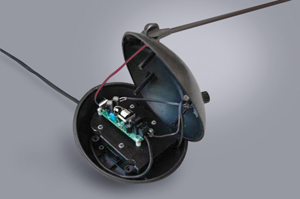 Figure 7: NCP1014LEDGTGEVB constant current driver board mounted in base of desk lamp. 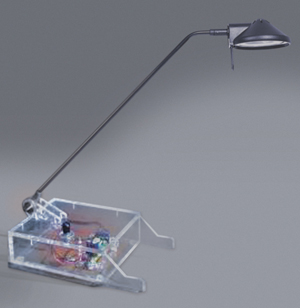 Figure 8: With alternate base.

Table 1: Before and after comparison.


While a comparison of the illuminance directly below the light source is important, even distribution of light on the surface is also significant, and thus, other test points were selected at a 0.25 m offset from the center to characterize the distribution of the light under normal operation conditions. A summary is shown in Table 2.


In this example, the converted LED desk lamp produced 13 percent greater illuminance than the 35-watt halogen bulb yet consumed 73 percent less electricity. Interestingly, after reviewing the performance of the magnetic transformer alone in the original 50-watt desk lamp, it had approximately 8.3 watts of loss, which is more than the 8.0 watts used by the LEDs in the converted desk lamp. In other words, the transformer in the base of the original halogen lamp consumed more power than the LEDs in the converted desk lamp.

Figure 9 displays a comparison of light patterns between the halogen lamp on the left and the converted LED lamp on the right. The comparison is between a 35-watt halogen bulb and the LED without any secondary optics. Note the non-uniform pattern created by the tubular shape of the GY6.35 halogen bulb. Conversely, the LED assembly is mounted in a circular recessed area of the heat sink as shown in Figure 5. This provides a more circular light pattern with uniform illumination in all directions. High brightness LEDs excel at providing uniform directional light distribution due to their lambertian light structure.

Recessing the LED inside the heat sink facilitates the possibility of using secondary optics and avoids possible glare if the lamp were at eye level. As seen in Table 1, center illuminance increased by 170 percent by incorporating additional reflector optics. Combining LED performance with a high efficiency driver and an off-the-shelf optic provides a lighting solution far superior to a halogen luminaire. 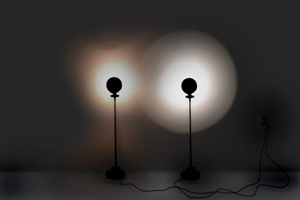 
The surface of the exposed glass plate covering the halogen bulb measured over 250°C. By comparison, the maximum temperature of the LED mounting substrate was only 77°C. Since this was a retrofit, the existing unvented plastic housing for the halogen bulb was reused. With the plastic cover removed, the LED mount temperature dropped to less than 63°C; if the product was optimized for LED operation, the thermal environment would improve further, as the non-vented cover could be redesigned or removed depending on the end product design considerations. Note as well, under normal drive conditions (350 mA), the LED mount temperature with the cover on was 49°C.

The benefits in energy consumption are clear. The higher efficiency, smaller size and weight, and lower LED power dissipation opens the door for innovative luminaire designs that have historically been constrained by the limitations of halogen bulbs. Effective solutions are possible when coupled with an appropriate LED driver circuit to simplify the product design so that, with only minor changes, the same product could be sold in all regions of the world. Moreover, the adjustable control allows the user to further optimize the light output for their specific environmental needs instead of the one or two light levels of a traditional halogen-based desk lamp. Energy savings increase substantially at lower brightness settings.

A driver optimized for universal AC input of 90 to 265 VAC allows a manufacturer to utilize one basic luminaire design for all markets, and only the power cable would need to be changed by region. Luminaires based around state-of-the-art LEDs such as the Cree XLAMP MC-E and driven by high efficiency constant current source drivers will allow the introduction of new long lasting, energy saving general lighting products. While this example shows the performance of a retrofit application, further optimization can be achieved if the luminaire is designed specifically with LEDs from the start.