Tablet MCUs (microprocessing units) and cell-phone application MPUs top the list of 10 IC products forecast to surpass the 6% growth rate expected in 2013. In fact, five product categories are forecast to experience double-digit growth, according to IC Insights’ 2013 McClean Report. The report identifies and segments the total IC market into 34 major IC product categories, and then ranks them (see the figure). Overall, positive growth is expected for 22 categories this year, up from 10 in 2012.

Consumer mobile media devices, particularly smart phones and tablet computers, will drive tablet MPUs and cell-phone MPUs to the head of the class for the third consecutive year. NAND flash and special-purpose logic devices are other mobile-system IC devices expected to grow beyond the industry median in 2013. 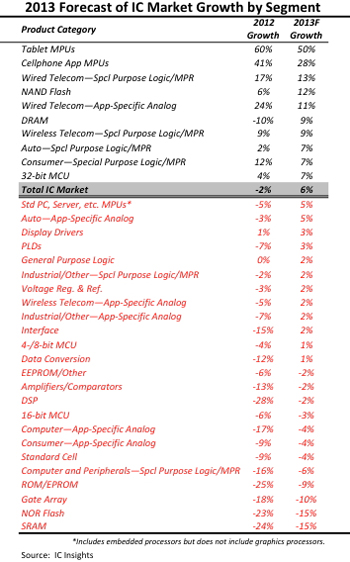 In a bit of a surprise, the DRAM market is forecast to jump 9% in 2013, three percentage points higher than the total IC market, after experiencing steep declines in 2011 and 2012. Though DRAM unit growth will see only a 2% increase, the overall average selling price will rise 7%. More stable pricing becomes a major component in this upswing, due to fewer suppliers in the marketplace and thus fewer price wars among competitors.

Bucking the “everything-going-wireless” trend, two “wired” telecom ICs are forecast to grow faster than the total IC market. Expectations are that special-purpose logic/MPR and application-specific analog wired telecom IC segments will increase by 13% and 11%, respectively.

Telecom and network operators say that Internet and video transmissions have increased data traffic by more than 50% per year. All wireless traffic eventually goes through high-speed cable transmission backbone networks, meaning communications get routed over long distance via optical cable before arriving at the cellular network on the other end. Therefore, all mobile Internet, data, and video traffic must go through a cable network, which is hiking up the wired telecom IC market. Another smaller driver of the market is increased use of landline phones within developing countries.

On top of that, telecom companies and network operators continue to upgrade their long-haul and metropolitan-wide communications system, according to the report. These require a multitude of high-speed transmission ICs, among other circuits. Upgrades include 100-Gbit/s systems, which are finally being deployed. In addition, companies are developing technology and ICs for next-generation 1-Tbit networks.

For more information, go to www.icinsights.com.